While Spain is undoubtedly one of, if not the, top holiday destinations for sun loving Brits, a trip over to the likes of Ibiza, Alicante or Benidorm is a more unusual proposition at the start of the year.

Chances are you’ve never considered it before, but heading over to Spain in January is actually a great idea for a few reasons. First off, it’s still quite warm, with average temperatures sitting around 10-16°C on the mainland – making Spain one of the warmer climates in Europe for this time of year. Second, it’s cheaper, with offseason prices meaning your travel, accommodation and activities will all come in at a lower cost. Third, you’ll get to see a different side of Spain, with fewer fellow tourists to get in your way.

But what about things to do? The good news is there are plenty of unique experiences to be had in Spain this January. We’ve picked five that could make your winter visit a memorable one.

See the stunning architecture of Barcelona 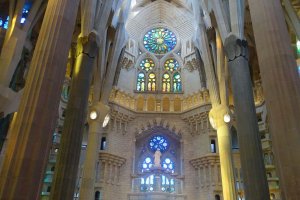 It should come as no surprise that the vast array of art, architecture and cultural vibrancy in Barcelona carries year-round appeal. Head over in summer, though, and you’ll find the city streets jam packed with tourists, making seeing some of the city’s best creations harder work than it needs to be.

Visiting in January gives you a chance to reach much of the city without too much trouble and see many of the works of the world-renowned architect, Antoni Gaudi, up close and personal.

If you want to keep things a little more traditionally winterish, you can go skiing in Granada, which is one of the coldest parts of southern Spain this time of year. The mountainous city averages temperatures of 7°C during the day, and there’s plenty of snow and skiing opportunities due to Granada’s proximity to the Sierra Nevada Mountain range.

Get a taste of summer in the Canary Islands

At the other end of the Spanish January weather spectrum sits the Canary Islands, which boasts temperatures as high as 20°C at the turn of the year. One could argue that such temperatures are perfect for travelling Brits that want ‘hot, but not too hot’ conditions, but the cooler than normal climate means you can see a different side of the likes of Tenerife and Gran Canaria, with great hiking opportunities around the volcanic terrain of Lanzarote.

Like Barcelona, Spain’s capital is rife with stunning architecture and rich history, which is documented by some of the best museums in Europe. The likes of the Prado Museum, Thyssen-Bornemisza and the Reina Sofia all make for highly worthwhile trips that aren’t reliant on the sun being out.

Hop on a cruise from Southampton to Spain this January and you’ll be able to visit a number of the country’s best spots, including Alicante and Seville. Where the latter is concerned, a January visit offers you the opportunity to see one of Spain’s hottest regions in a more comfortable climate. Seville’s highs of around 36°C in summer can make visiting the likes of the Real Alcazar palace and the Cathedral of Saint Mary of the See a rather daunting prospect. A cooler January visit with barely any crowds sounds much more appealing.

If you’re looking to get away from the grey days of new year in the UK, Spain offers a perfect getaway opportunity. You’ll see a different side of the country, enjoy better weather than at home and spend less money, so why not book yourself a little time away this January?