You are here: Home / Switzerland / The Charlie Chaplin Museum: a visit to the Musée Chaplin in Vevey Switzerland

Hi Frugalistas!  I must admit I have never been a great fan of Charlie Chaplin, but when I was looking for day trips from Montreux on my trip to Switzerland last year I came across the Charlie Chaplin Museum (Chaplin World) in nearby Vevey.  The Musée Chaplin is located in the Charlie Chaplin house just above Vevey.  Despite not being a fan, I found it a fascinating museum, in a winning location and well worth including in your Switzerland itinerary. 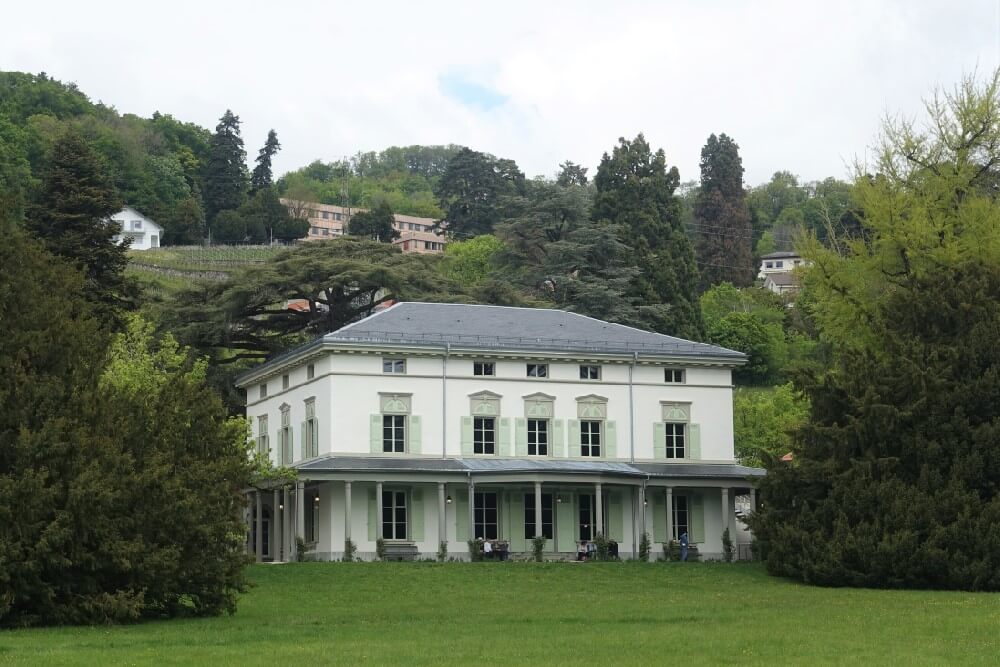 Arriving at the Charlie Chaplin Museum

If you are staying in a hotel in Montreux you will be given a local transport pass which allows you to use local trains and buses for free.  The pass will take you as far as Vevey by either train or bus.  From Vevey itself, you take a second bus up into the hills.  It will drop you directly outside Charlie Chaplin’s house.

Entering through the gates of the Musée Charlie Chaplin everything is well sign posted and organised to make the  purchase of your ticket and finding your way into the house easy. 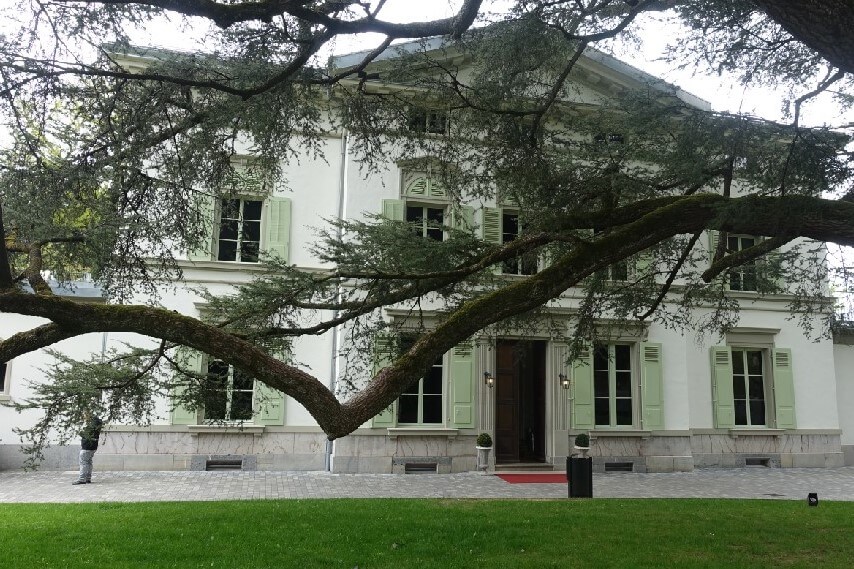 If you are visiting the museum during the peak season it is worth pre purchasing your entry tickets so you can skip the line and go straight in:

The Charlie Chaplin Musée was home to Charlie, his wife Oona and their family of eight children from 1952 until his death in 1977.  The one thing that really struck me was what a family man Charlie was, and that this was first and foremost a family home.  The house is full of family photos and old home movies of Charlie Chaplin’s wife and children – many sitting on the veranda enjoying meals together.  The fun and love at that table just shines through the grainy old films. 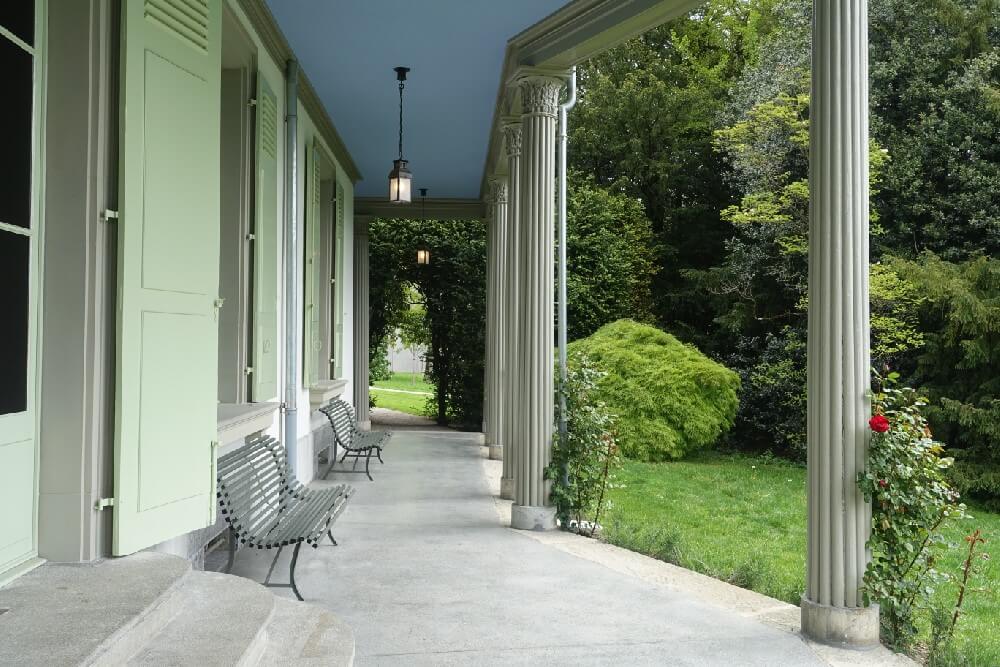 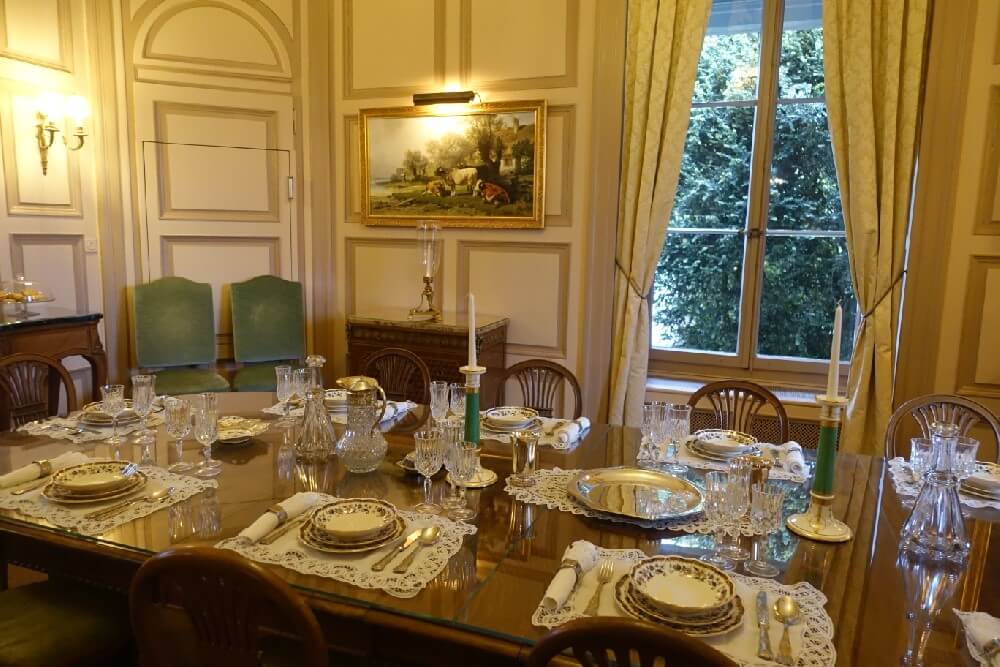 Also very striking was the deep relationship between Charlie and Oona.  The home pays homage to their love affair throughout the house in its displays as well as in photos and videos.  Particularly poignant is Charlie’s bedroom, where he died in 1977.  A film of an older, frailer Charlie walking with Oona in their garden is a sensitive and heartwarming way to mark the end of his life on your tour of the house. 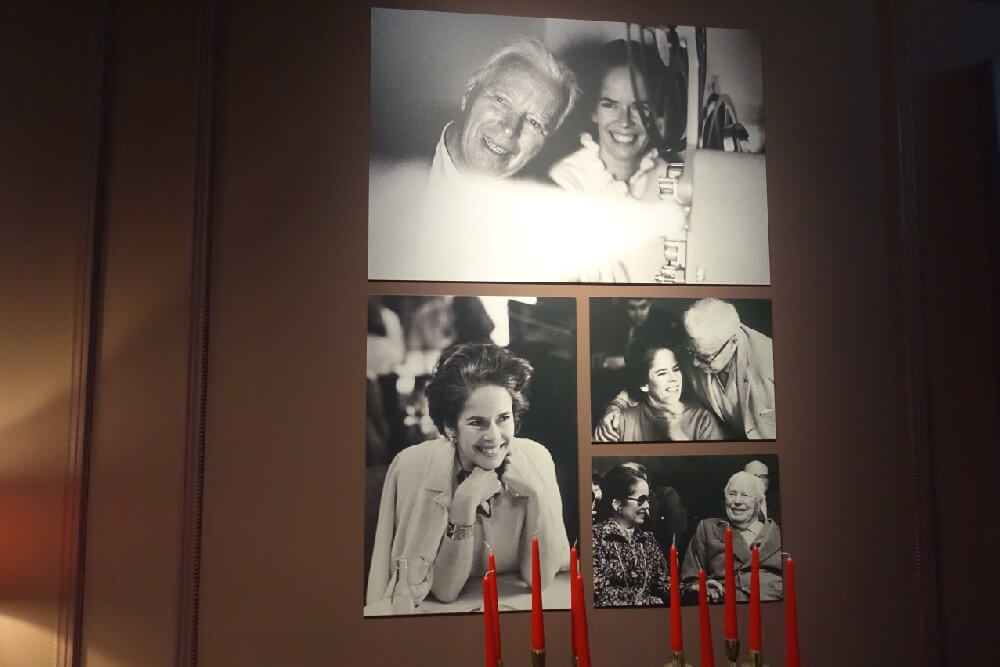 Charlie Chaplin was not just a silent screen actor, and the museum plays homage to Charlie’s career as an actor, director and script writer.  I found the room containing his original scripts, complete with his hand written notes particularly interesting. 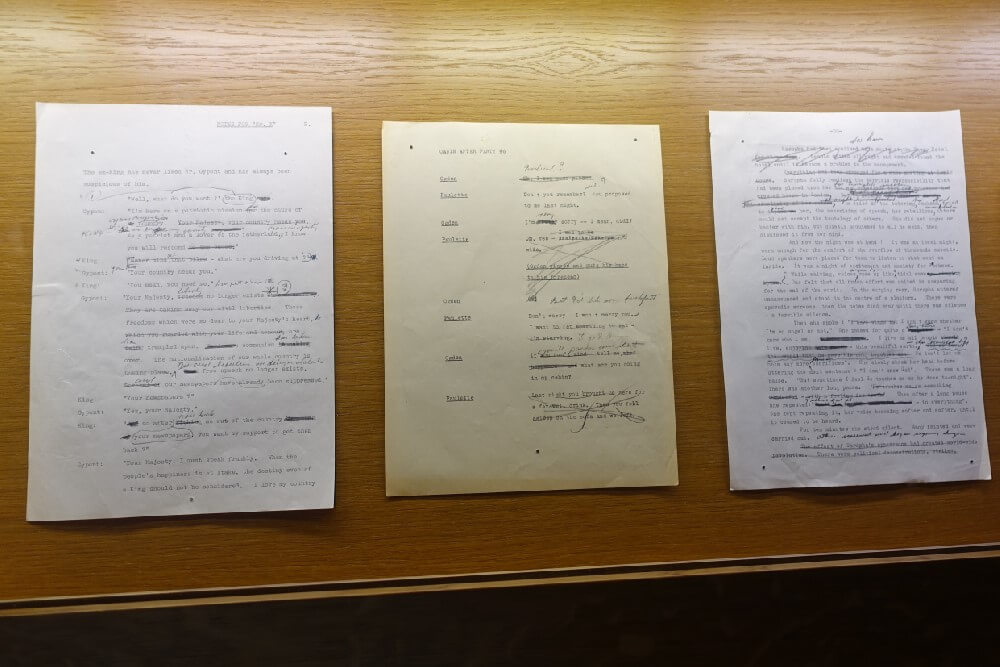 Chaplin the enemy of the people

The Chaplin Museum doesn’t avoid the topic of how he came to move to Switzerland, which I was pleased to see, and also found interesting.  Chaplin came to the attention of authorities during the late 1940s when the US government was concerned about growing communist sentiments in the US.  Tensions grew in the early 1950s and in 1952 while sailing to England, he was advised he would be arrested if he returned to the US.  Chaplin did not return to the US until 1972 when he was awarded an honorary Oscar.

Out of such adversity, the move to Vevey, and this wonderful family home was created.  The museum features a room devoted to this period of Charlie Chaplin’s life in America complete with news footage of the period, newspaper articles and other historical records. 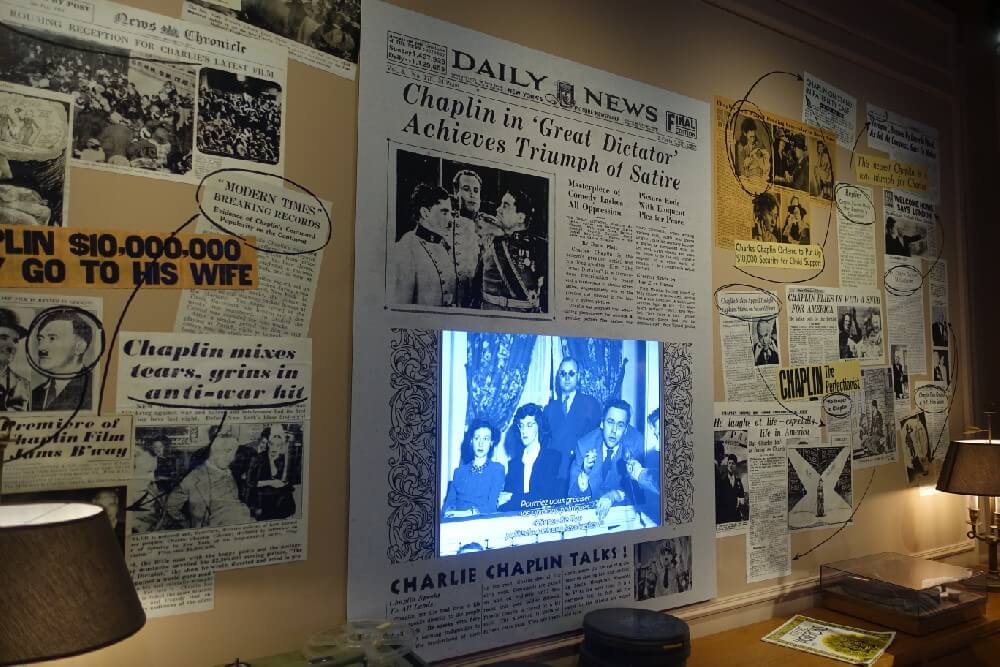 The Chaplin house is littered with his quotes, and nods to his famous friends.  His friendship with Albert Einstein is celebrated with typical Chaplin absurdity in a quirky art deco bathroom. 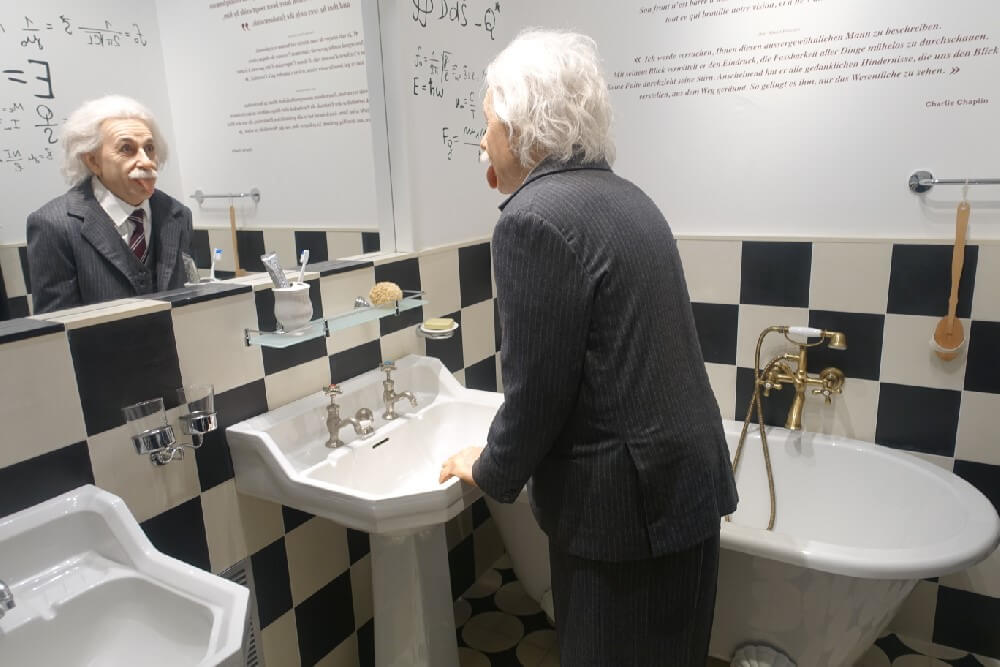 The Chaplin Museum garden is also not to be missed.  The large expanse of grass was deliberately left unplanted by Charlie, who took delight in watching his children play games and run around it.  A gravel path takes the visitor around the perimeter of the garden, now home to mature trees.  There are a few tables and chairs in the shade of one, perfect for enjoying a picnic lunch.  The far reaches of the garden also provide some lovely views back towards the lake and the house itself.  It was quite cloudy the day I visited, but I would imagine on a sunny day the views would be magnificent and the gardens, unmissable. 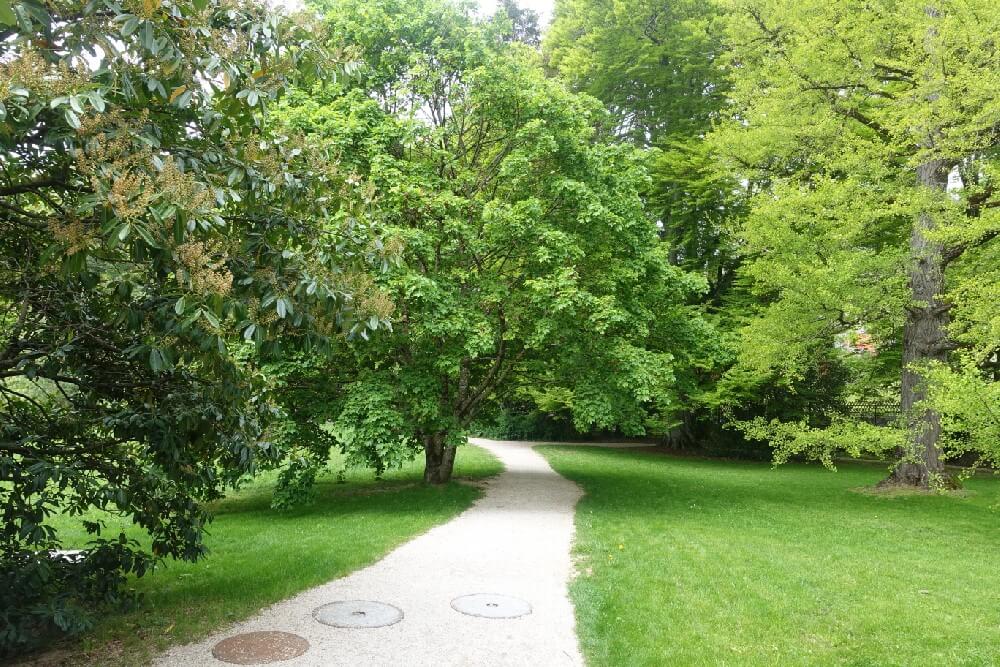 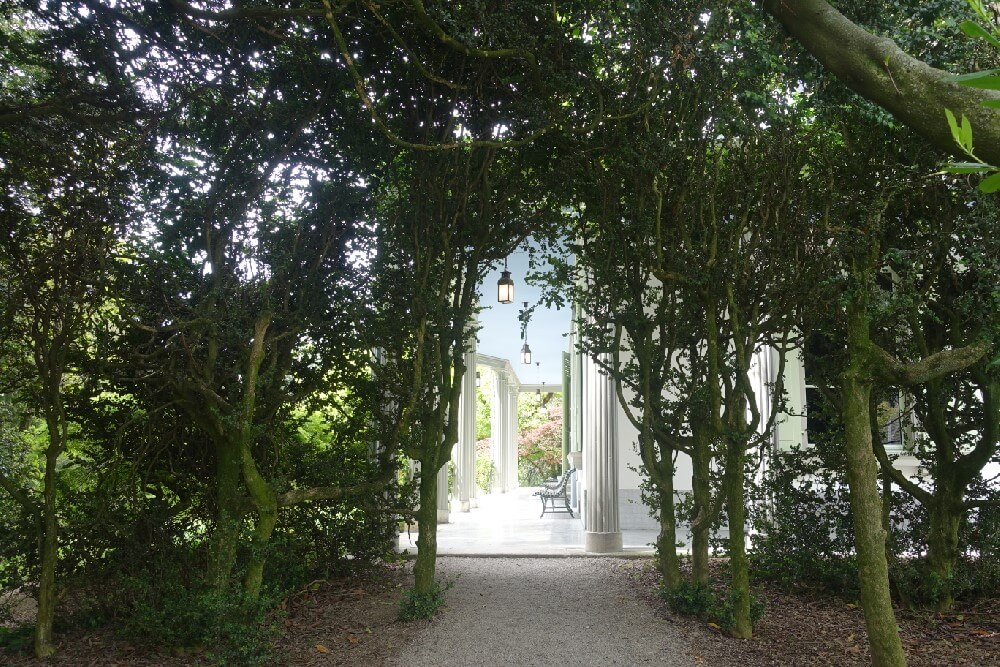 I found the Chaplin Museum both beautiful and interesting.  Apart from the fact I love sticky nosing in other peoples’ houses, it celebrates the life of a man who lived his to the absolute fullest, on his own terms, and full of conviction.  I learned a lot about Charlie Chaplin and his life, and I left with a new found respect for this brilliant, complex man. 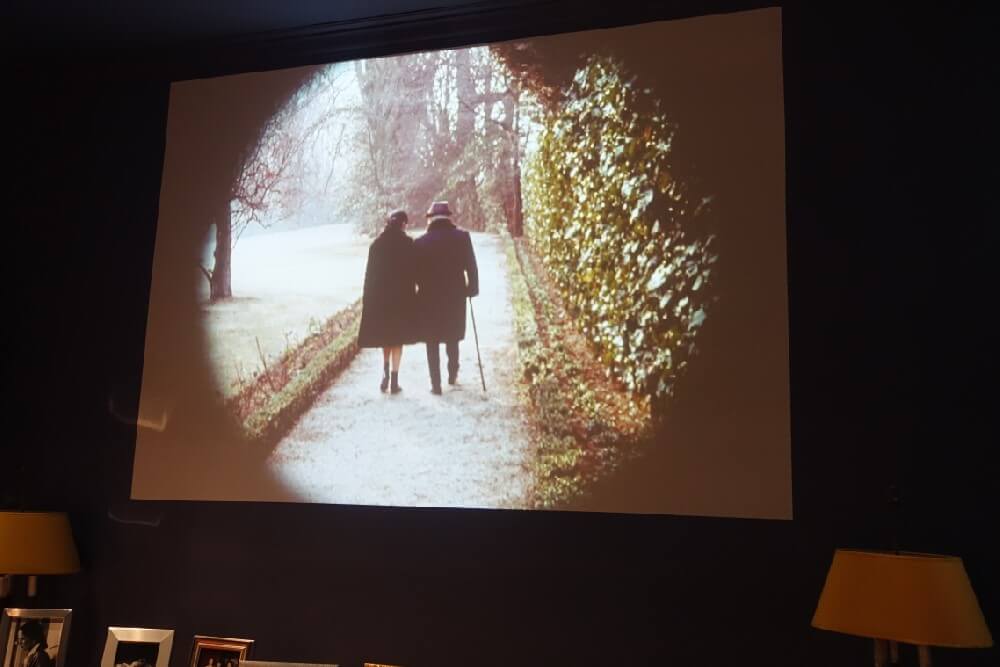 Plan your trip to the Chaplin Museum:

In Montreux I stayed at the centrally located Hotel Parc & Lac.  It is well worth paying the extra for a lake view room, but skip their breakfast.  You can book the hotel or search other Montreux hotels here: