Hi Frugalistas!  Regular readers will know how much I love a good food tour.  I do them regularly when I travel to Europe.  Food tours in Europe are a great to see the city, experience food you wouldn’t try otherwise and spend time with a friendly local.  But I had never done a food tour in Paris, so when my friends at The Tour Guy suggested I try their Marais Paris Food Tour on a recent visit, I knew it was a food walk I needed to try.  Even though I thought I knew the Marais area of Paris well, I still found plenty of new things to learn, and new food to try on our Marais food tour with The Tour Guy.

It is important you check the terms and conditions of your tour, including cancellation prior to booking.

When our The Tour Guy Marais food tour was confirmed we were given very detailed instructions on how to find our guide and the time.  Unfortunately, for reasons I didn’t understand (because the instructions were very specific and easy to follow), the other party who were meant to be joining us went to the wrong Metro station, and missed our tour.  So it was myself, Miss G and Mr Frugalfirstclass who headed off with the charming Marais local, Anatole.

We arrived a pretty dove grey bar with a very chilled vibe.  The first mission on our tour was to drink Champagne and eat oysters.  MissG decided to pass, so it was Mr Frugalfirstclass, Anatole and myself to partake in the bottle of Champagne.  Mr Frugalfirstclass doesn’t normally eat oysters, but he enjoyed the very fresh offerings:  a salty Atlantic oyster and its fresher, more sea like Normandy cousin.  Served simply in the French style with lemon juice and bread and butter they were fresh as the sea and delicious.  To partner our oysters, Anatole had chosen a Champagne from a small family owned house in Hautvillers.  It was fun to try something from a family house rather than the big international labels available at home and it didn’t disappoint. 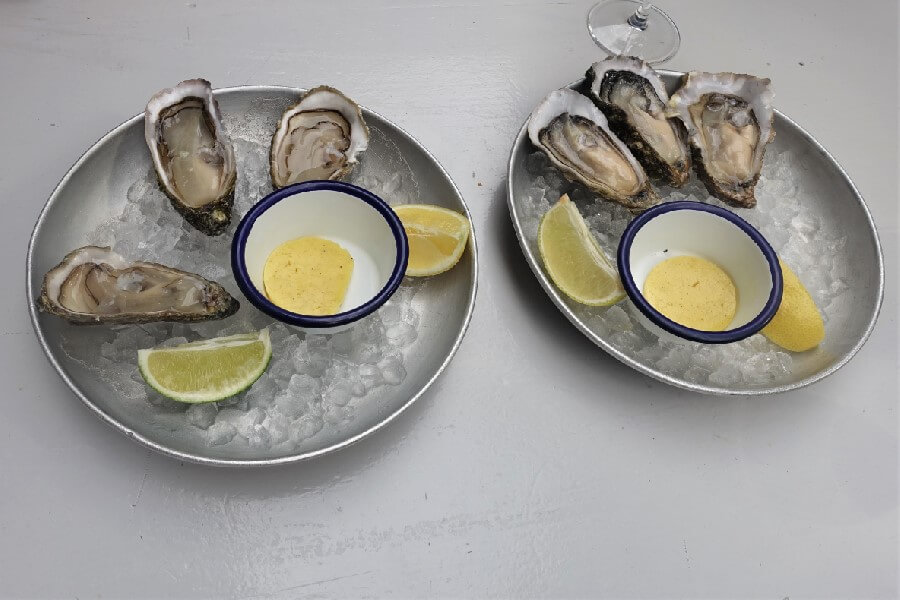 A bit more walking and chatting, and suddenly I knew exactly where I was:  the Enfants Rouge market.  By this time, it was around 6pm, and to my surprise the market was still open, and it was where we were going next.  By passing the cafés around the market we headed straight to the cheese mongers, where Madame was waiting for us with a cheese plate and glasses of Bordeaux to accompany.  MissG was promptly supplied with a glass of blackcurrant drink, so everyone was happy. 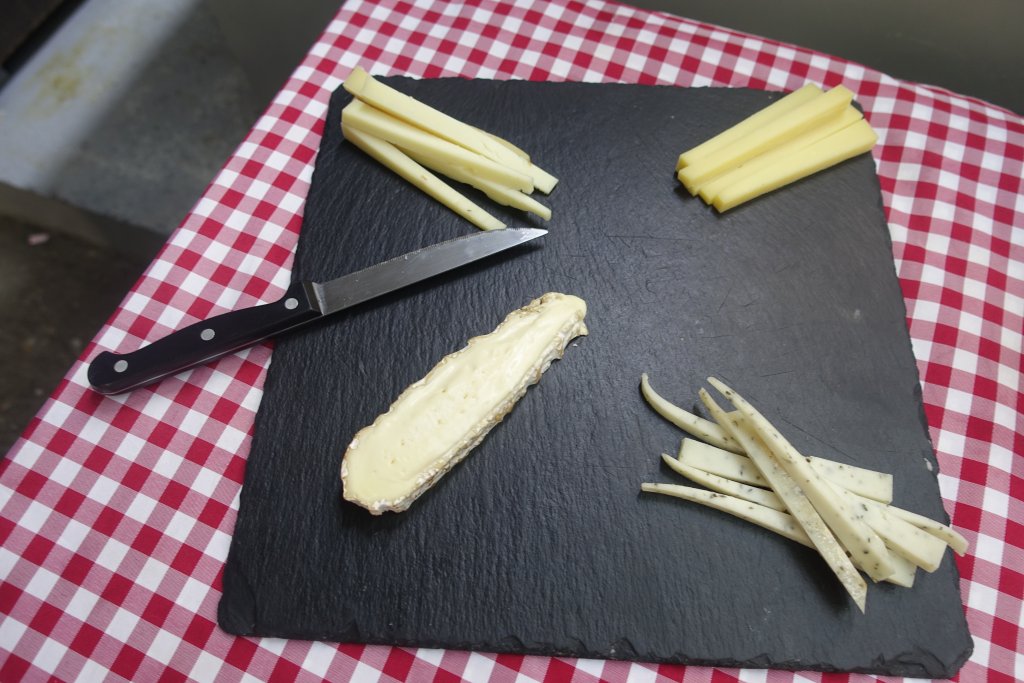 France is home to over 1000 varieties of cheese, which can make choosing just the right one a bit tricky for visitors.  Our plate showcased 4 very different, but typical options.  Joining the very popular comté (a good choice for those who prefer a Cheddar style yellow cheese) was a brébie, or sheeps milk cheese which has a slightly stronger flavour, a brie, which lovers of soft cheese will recognise and a chevre, or goats milk cheese – this one with nettles.   I don’t normally like chevre (it often tastes like the smell of dirty socks to me), but this one was creamy and mild and much more to my taste than others I had tasted previously. 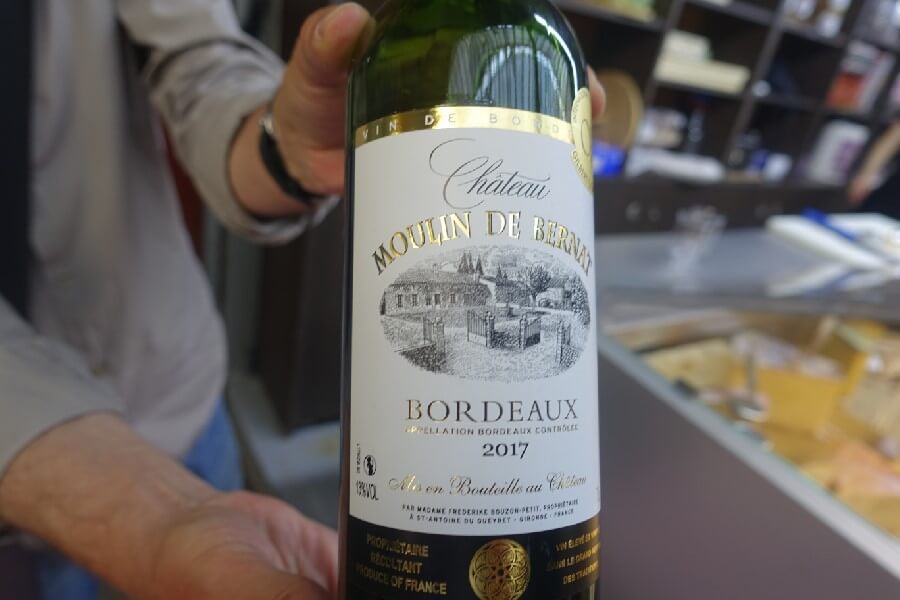 The cheese was very moreish but we needed to save room, as we were off to eat falafel.

Falafels are one of the best street foods to eat in Paris.  And the centre for falafel in the Marais is rue de Rosiers.  When I knew we were going to be eating falafel in the Marais, I assumed we would be queueing with all the other tourists at As de Falafel.  But no.  Anatole took us down a side street, to a place he said was less well known, but better.  Were they better?  I don’t know.  But our falafels were tasty and not at all dry as they often are.  We ate them in the street, they way they are meant to be savoured.  They were good. 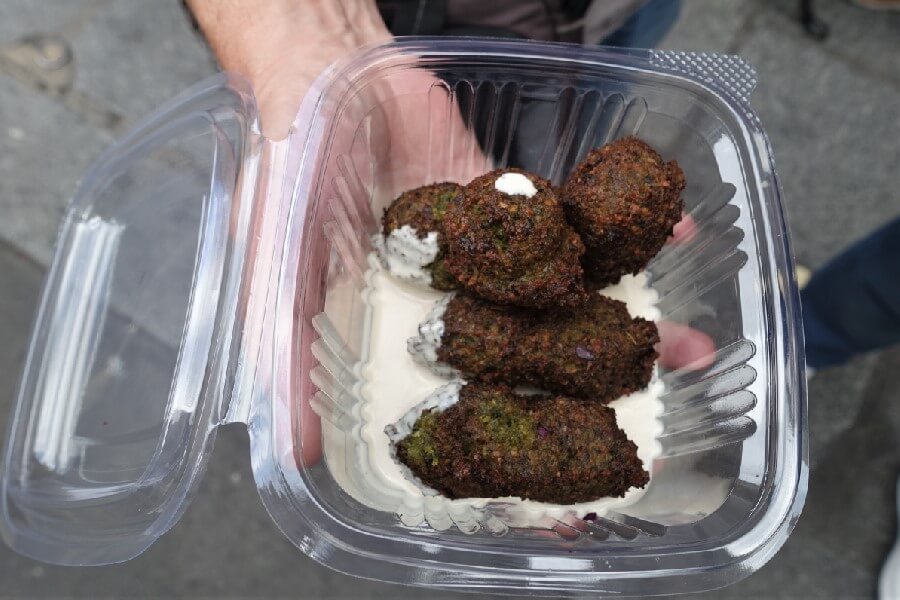 Crêpes, but no Nutella

Nutella crêpes are a popular street food to try in Paris.  Next we were going to eat crêpes, but ours were traditional Breton crêpes, rather than the popular tourist snack.  Ours were traditional Breton buckwheat crêpes called galettes.  We tried two different galettes – a galette complet with cheese, ham and mushrooms and a galette forestière with chicken and mushroom in a creamy sauce.  Washed down with the traditional alcoholic cider served in a ceramic cup rather than a glass, they were tasty.  MissG enjoyed hers with a glass of lemonade. 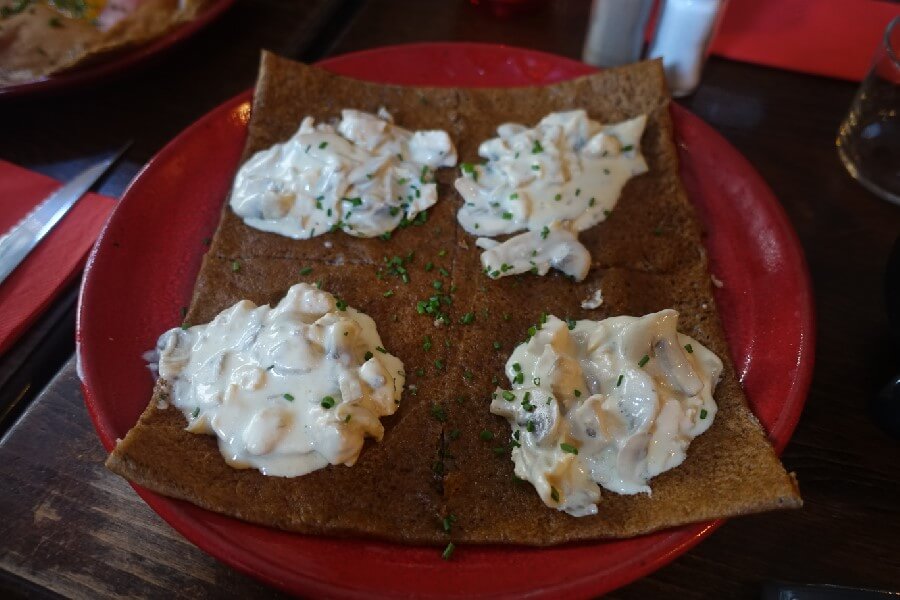 Dinner in the Marais

Finally it was time for dinner.  Our tour description promised us a classic French brasserie and I was thrilled when we arrived and I saw that that exactly what it was.  By this stage I must admit I was getting a bit worried.  I was quite full, and I knew we were finishing with what could have been quite a big, heavy meal:  boeuf bourguignon and crème brûlée.  The ever picky MissG was having entrecote steak and fries. 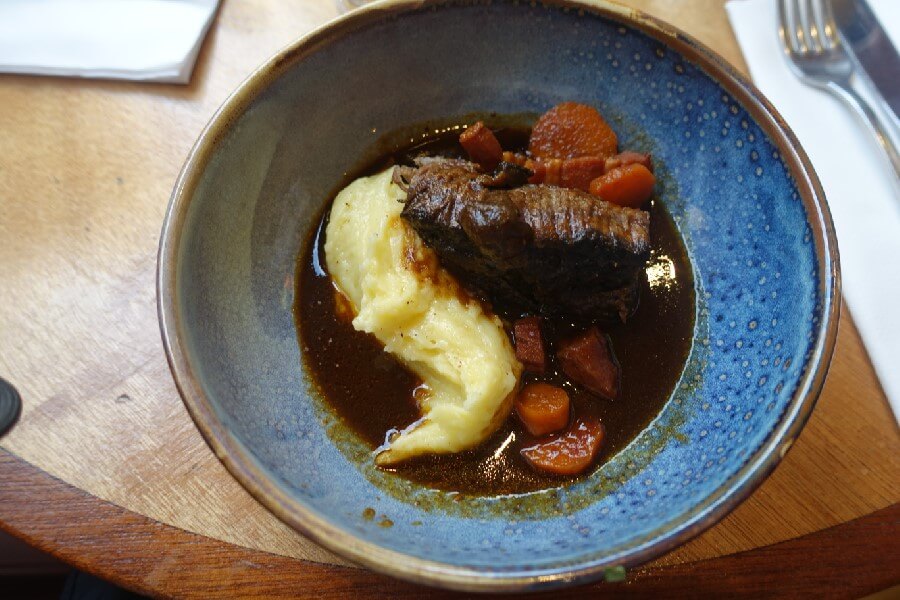 Despite the cracking pace we had set during the tour, fortunately dinner was a slightly more leisurely affair.  We chatted to a lovely American couple at the table next door and just generally had a relaxing time.  Our serves proved not to be too huge – in fact, just right.  The beef melted in the mouth, and the accompanying mashed potato was silky smooth.  Washed down with a glass of Côtes du Rhone it was a classic end to a fantastic evening.  MissG pronounced her steak “delicious”. 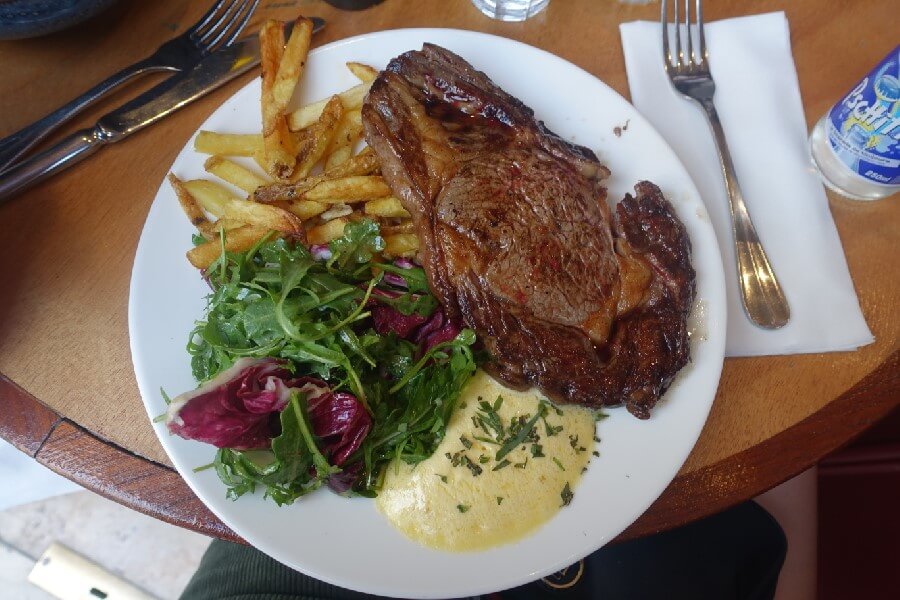 What I thought of The Tour Guy Marais Food Walk

We all loved this tour.  Even though not everything was to MissG’s taste, she did try everything except the oysters, and finished the evening with a full tummy.  Mr Frugalfirstclass and I were very full indeed, and enjoyed our evening.  What I really enjoyed was the culinary “tour de France” we experienced, in what is a very small corner of Paris.  Although I thought I knew the Marais fairly well, I was thrilled to find myself completely lost on more than one occasion.

As I always say when I take a food tour, it’s the opportunity to try foods I wouldn’t normally choose that I enjoy the most.  I would never choose to eat chevre, because I always say I don’t like it, but the chevre we ate in the market was wonderful.  Mr Frugalfirstclass doesn’t normally eat oysters, but he tried, and liked, the ones on this tour. 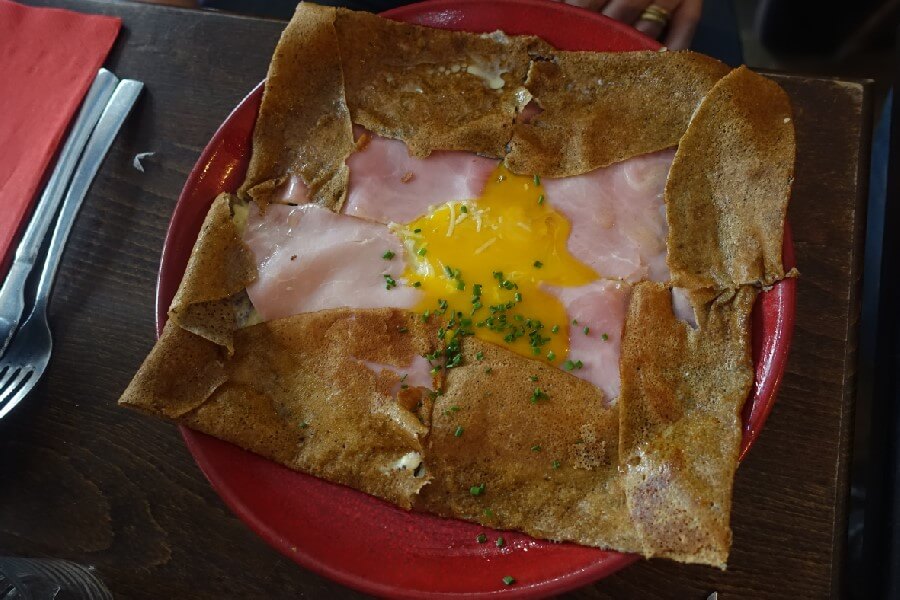 Anatole was a charming host, who went out of his way to make sure everything was to our liking.  He told great stories and we chatted about French politics and all sorts of other things.  I understand he also guides on the Normandy tour with The Tour Guy, so if he is available for either tour you want to book, I thoroughly recommend him.  If you want to practice your French, he will also be patient with your attempts.

The tour costs €99.95 per adult, which given the amount of food represents excellent value for money.  Readers of this post can book the tour with a 5% discount by using this link to book.

Because we had bookings at different restaurants, this tour keeps to a schedule.  You must be on time to the departure point to not hold up the tour.  Apart from the schedule, it’s also just good manners to not keep others waiting.

If you’ve been paying attention you will realise that there is quite a lot of alcohol served on this tour.  If you do not drink, non-alcoholic options are available at all stops except for the first one, where the entire bottle of Champagne needs to be purchased.  Should you have adults in your party who don’t drink, make sure you advise of this in advance so appropriate arrangements can be made.  Because the food is so great, and the servings so generous, you will not feel deprived if you are not a drinker. 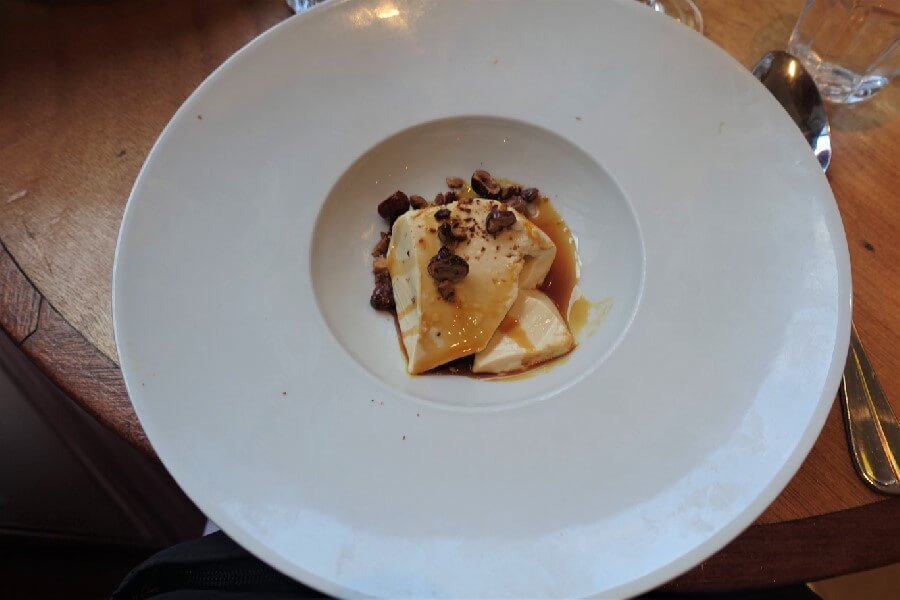 If you have picky eaters or people with particular dietary requirements  in your party, again, you should  advise in advance to confirm that suitable alternative arrangements can be made.  The tour moves at a pace, so reorganising menus on arrival is not an option.  The tour description on The Tour Guy’s website is an accurate reflection of what we were offered on the tour, so if the general menu is not to your liking, consider whether this is the best Paris food tour option for you.

The walking on this tour is quite gentle and distances are not long, making this Marais tour suitable for anyone of moderate fitness.  The tour would be suitable for children of about 8 years and up, although younger children who are good walkers and have good appetites might also enjoy it.  Children under the age of 6 who are not eating are hosted at no charge (you can bring your own food for them).  Stops at each place are not lengthy, so fidgety young ones will not be tested too much.

You can click here to book this tour now.

Plan your trip to Paris now: 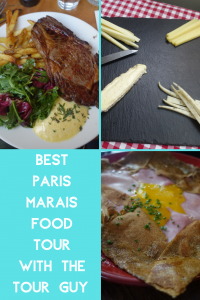 Author’s note:  We were guests of The Tour Guy on this tour.  Our opinions are our own as always.