You are here: Home / France / Has Paris changed? Should you plan a visit to Paris?
This post may contain affiliate links. Click here to see my full Disclaimer notice

Hi Frugalistas!  As Europe adjusts to a new normal of acts of terrorism, and the millions of refugees arriving from Africa and the Middle East, I knew Paris would have changed.  I had seen the changes in Paris myself over the past few years.  Heightened security, bollards and barricades where I’d never seen them before.  Soldiers patrolling the airport. In my first visit to Paris since the Stade de France, Marais and Bataclan theatre attack in November 2015 I wanted to know, has Paris changed?  Is it still the city I love, and, more importantly, did I feel safe, and should I recommend you still plan a visit to Paris?  Although I was only in the city for a short period of time this visit, there were some important observations I made. 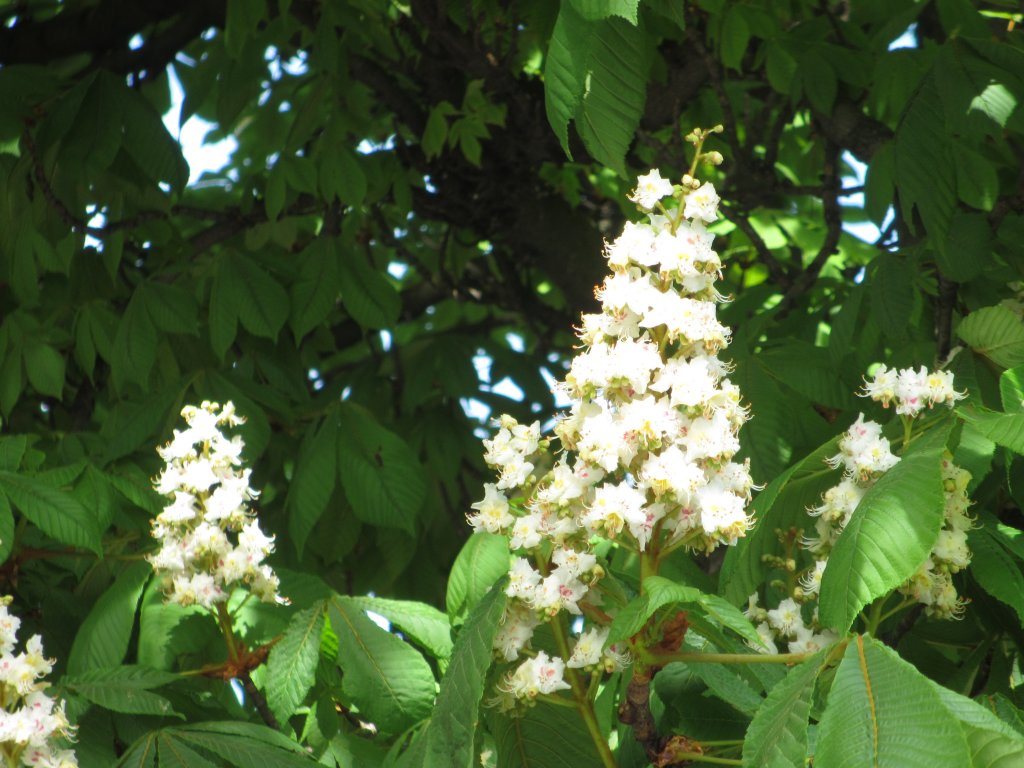 Horse chestnuts in April say “Paris” to me

The refugees in Paris

I noticed a big change before I even arrived in central Paris – the tent city of refugees under the bridges around the Porte de St Chapelle.  As the airport bus stopped at the traffic lights men, women and children ran among the cars.  Waving cardboard placards “famille de Syrie” (Syrian family), waving their (presumably Syrian) passports, begging for money.  Their faces were desperate, but also had a very sad emptiness to them.  Some of them could easily have been confused with Roma, that ethnic group so discriminated against in Europe.  I wondered if they were in fact Roma taking advantage of the refugee situation for a minute.  Then I felt ashamed in case I was mistaken, and was too focused on scams.

The scores of tents.  Mainly the same style, but in different colours.  Presumably from the same source.  On the French news that night it was reported that an estimated 7-800 refugees were now living under the bridges at Porte de St Chapelle.  I had heard that north eastern Paris was now home to refugees living on the streets, but I was shocked at how public, how obvious it was.

Arriving at Galeries Lafayettes, still with my suitcase straight off the airport bus, my next big observation came as an even bigger shock.  Security at the Galeries Lafayettes department store.  I’d seen security guards at the entrances of the major department stores previously.  They seemed to be there largely to control the hordes of tourists who descend daily.  And to keep the queues of Chinese tourists at the designer label concession boutiques in order.

Yes, it is still worth visiting Galeries Lafayettes

But this time, it was different.  Metal detectors.  A table.  “Madame, votre valise s’il vous plait” – Madame, your suitcase please.  My suitcase was opened and checked.  The security guard was polite and courteous.  He zipped my case shut, put it back on the ground and wished me a good day.  It was typical French “politesse” – good manners.  But it was definitely different.  Other shoppers had their handbags and backpacks scanned by the metal detectors.  Shopping in Paris is now considered a major security exercise.

The French Presidential elections are coming up (today, in fact, as I publish), and the hard right wing Front Nationale leader, Marine Le Pen is getting a lot of air time.  I heard her argue that all immigration needed to be stopped.  She was strident in blaming immigration for terrorism and all the other troubles in Europe.  She’s doing well in the polls.  Flicking TV channels, on three channels in a row I saw her or her deputy speaking.  It was confronting to listen to – and I almost wished I couldn’t understand them.  Have the French become a less tolerant, less welcoming society?

I haven’t visited the Gare de Lyon for a while.  If you take the train to eastern or southern France, or Switzerland, it’s where you will depart Paris.  When you arrive at the Gare de Lyon they never have the platforms showing for your train, so you always have to wait around on the concourse.  That means hundreds of people, all hanging around, waiting for their platform to be announced. 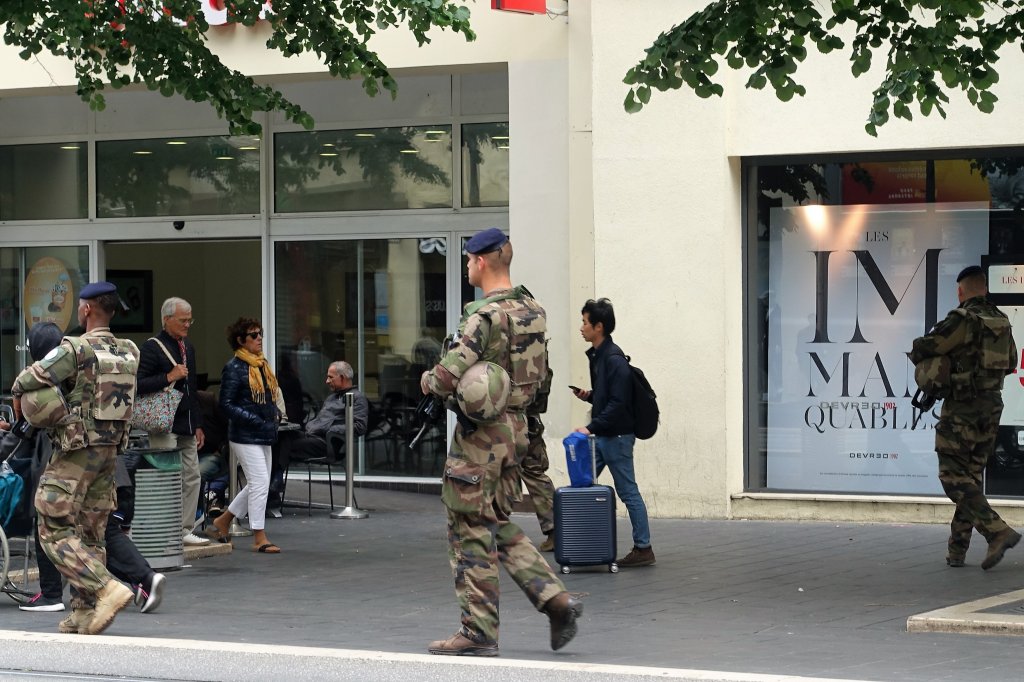 Armed soldiers in the main street of Nice

Groups of black clad security guards were everywhere.  As you would expect.  After all, there are major rebuilding works going on at the station, and yes, a large railway station in a large European city is an easy and obvious target for extremists.

But then there were the soldiers.  In groups of four.  Guns drawn at the ready across their chests.  They looked so young.  Two in the group I saw were girls, not much older than my own daughter.  Their baby faces had a look of alert determination.  They were out doing their job, patrolling.  An idle thought crossed my mind.  If there was an attack right now, what would those soldiers do?  In emergency and disaster management there is a concept is that you do the greatest good for the greatest number.  Their job would be to take down the attacker(s) if possible, and minimize the number of casualties.  They were not there to protect us all, but their presence sent a strong message:  we are waiting, and ready…….

So, has Paris changed and should you plan a visit to Paris?

Well, it would hard to say other than, yes, Paris has changed.  It’s a change I’ve noticed over several visits now.  It is a more “defensive”, more protected city.  The outskirts of the central part of the city have definitely changed in character.  It’s never been a particularly welcoming entrance to the city, but the Porte de Ste Chapelle has “welcomed” an entire town of people.

But I still think you should continue to research a plan a visit to Paris, and here is why………

The metro is still crowded.  People reading, listening to music, chatting.  Beggars and buskers getting on at different stops, and sitting in the walkways.  But I noticed a change in the French people that I’d not seen before.  A young woman stopped, and gave a homeless man a container of soup.  The beggar on the metro was paid – multiple times.  Maybe Paris is slightly “softer”, or maybe I just notice it more now. 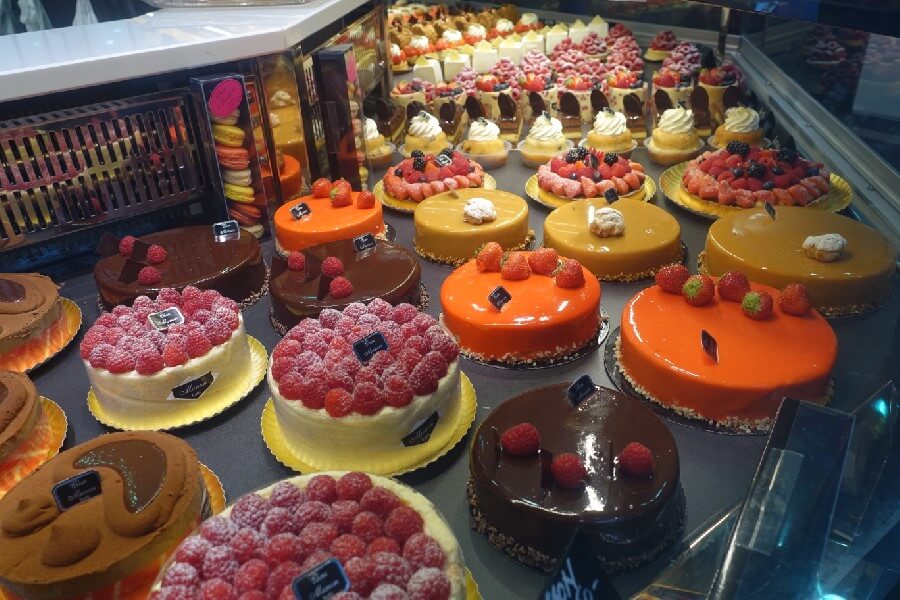 The food is still delicious

In April, the horse chestnut trees still flower.  Kids still ride their scooters to school.  The bread is still delicious, and everyone still wishes you a good day.  At the Gare de Lyon, the announcements still commence with that same sing song jingle they’ve had for years.  There’s a reassuring familiarity amongst the changes.

Are you planning a trip to France? Click here to join my Plan Your Trip to France Facebook group.

So, rather than worry about the soldiers patrolling the Gare de Lyon, and the metal detectors in Galeries Lafayettes, let’s focus on the positives.  Paris is still one of the most beautiful cities in the world.  The food is still delicious, and the people watching is still first class.  The sites are all still there, waiting for you to visit.  So what if you need to queue a little longer to have your bag checked?

To plan a visit to Paris, or Europe more generally, is one of the most important things you can do now as a traveller.  My favorite travel guide writer, Rick Steves, talks about travel as a political act.  At the moment, going to Paris is a political and social act.  An act of confidence, an act of defiance and an act of solidarity. 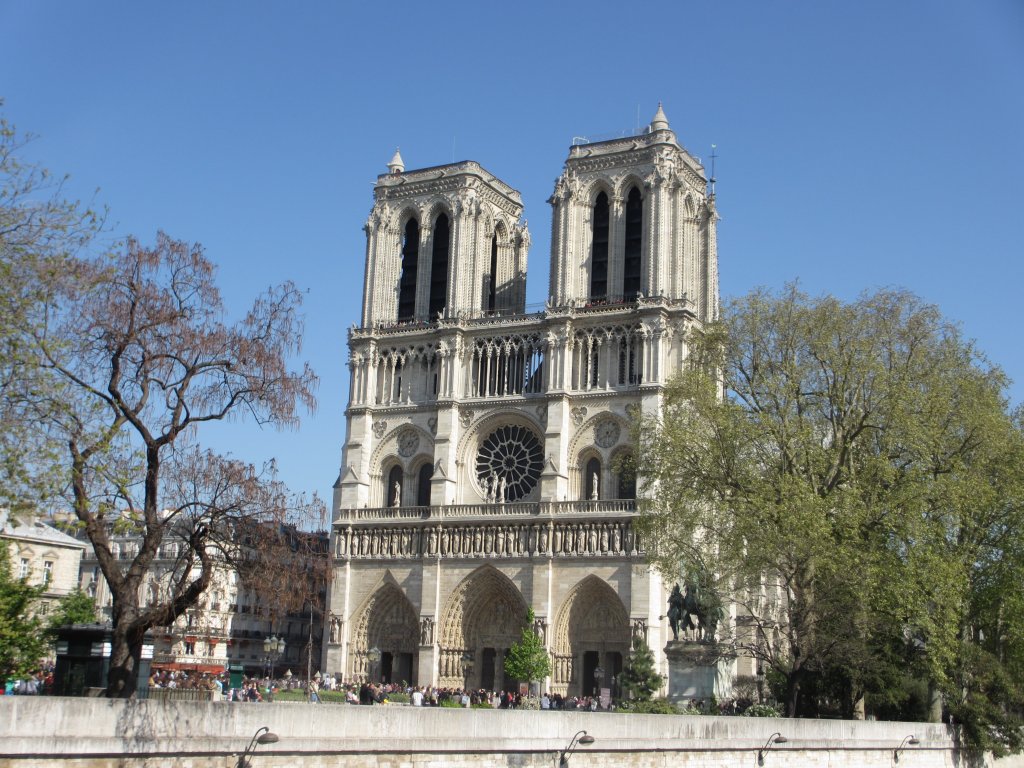 Yes, Paris has changed.  But go to Paris.  Eat macarons.  Walk in the park.  Drink wine and enjoy one of the most beautiful cities in the world.  It’s still very, very worth it.

Plan your trip to Paris:

Post script:  I wrote this post very quickly as I was traveling down to Nice to go to our beautiful Medieval home in Pigna.  A few days later there was another attack – this time attacking a group of French national police.  One was killed and others injured.  On our return to France from Italy, the train was checked by the national police when we arrived back in France.  A bag left on the luggage rack was questioned and its owner sought.  There were armed soldiers on the main street in Nice.  Yes, France is changed.  But you should still plan a visit to Paris.