You are here: Home / France / One day in Monaco: a Monaco day trip itinerary

Hi Frugalistas!  When I realised how close Monaco was to our townhouse in Pigna I knew a day trip to Monaco was in order.  I’d driven through Monaco with Mr frugalfirstclasstravel about ten years ago, and visited Monaco at night when I was a young one, but had never really had the opportunity spend a day in Monaco and explore Monaco properly. So, what to do in Monaco for a day and how did I spend one day in Monaco? 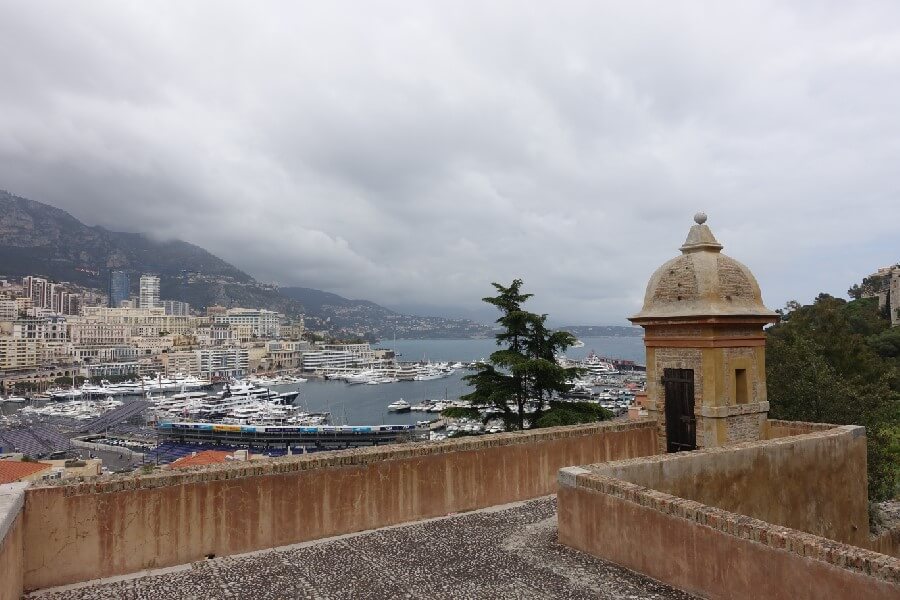 How to get to Monaco

Monaco is one of those places that is easy to reach by either car or public transport.  I caught the train from Ventimiglia to Monaco (half hourly EUR7 return), but you can also catch the train from Nice to Monaco just as easily (same timeliness, same price).  You can drive to Monaco, but I would suggest parking your car in one of the many public car parks and then either walk or use public transport to get around. 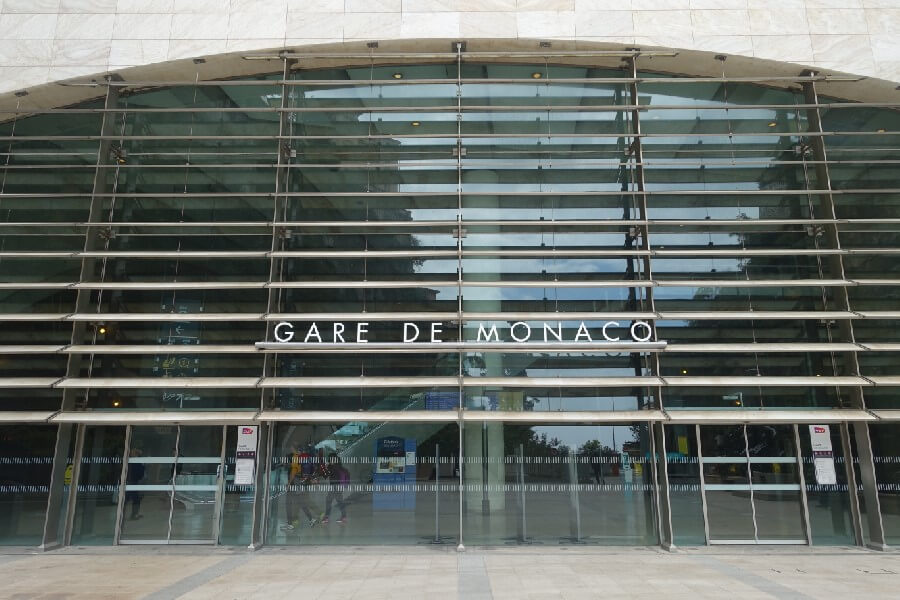 The Monaco train station is impressive, and makes travel to Monaco easy

The station is in the higher part of town and there are multiple levels and exits, so be careful to pay attention to where you come out of the station.

Click here to buy your train ticket to Monaco >> 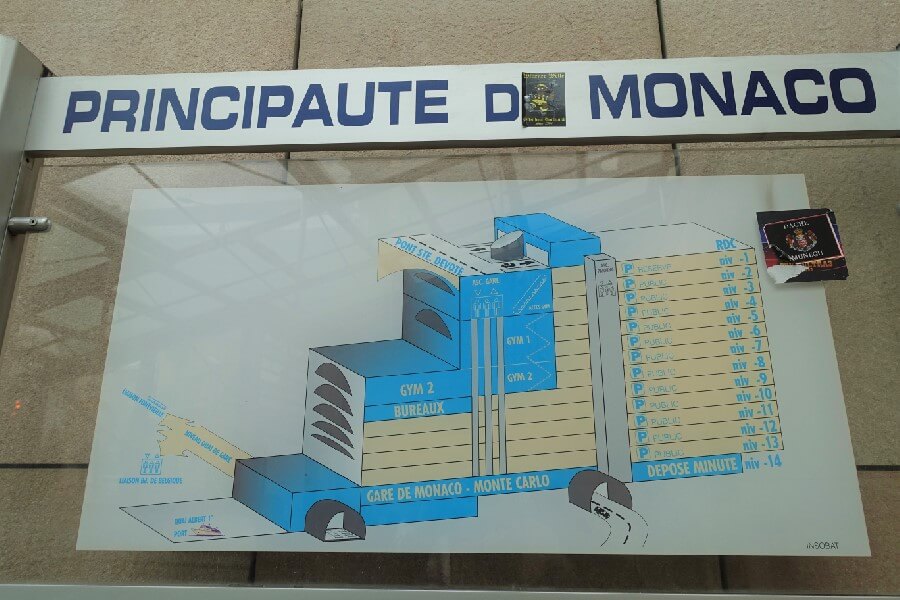 There are multiple entrances and exits from the Monaco train station

Monaco has a very good bus service, but I didn’t use it.  While it was overcast the day I visited I preferred to walk around.  Yes, it’s very hilly and there are lots of stairs – but there are also a series of public lifts (elevators) that have you flying from the top of the hill to the bottom in a matter of minutes.  They are well sign posted, and marked on the map that you can pick up from the Tourist Information Centre.  They make it very easy to get around Monaco in one day. 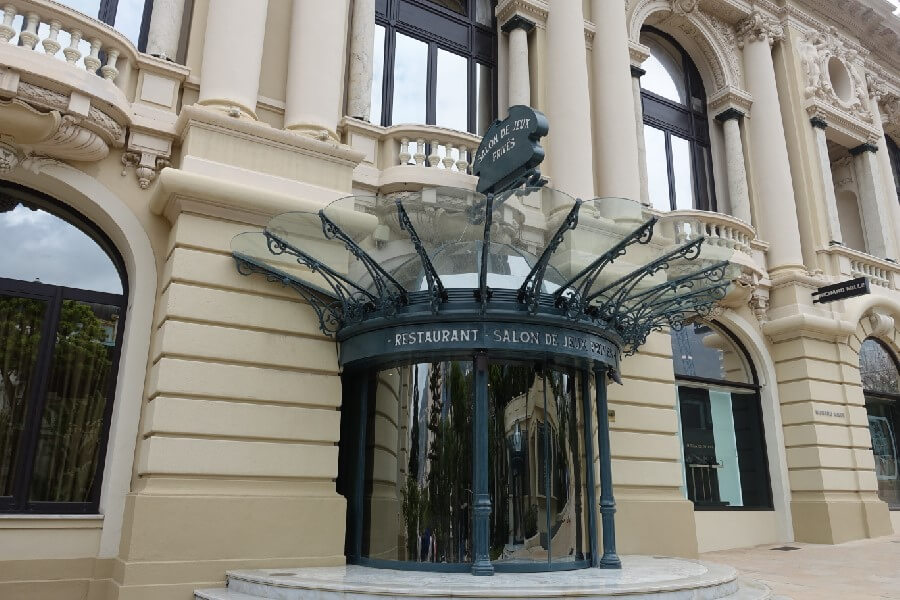 Things to do on a Monaco day trip 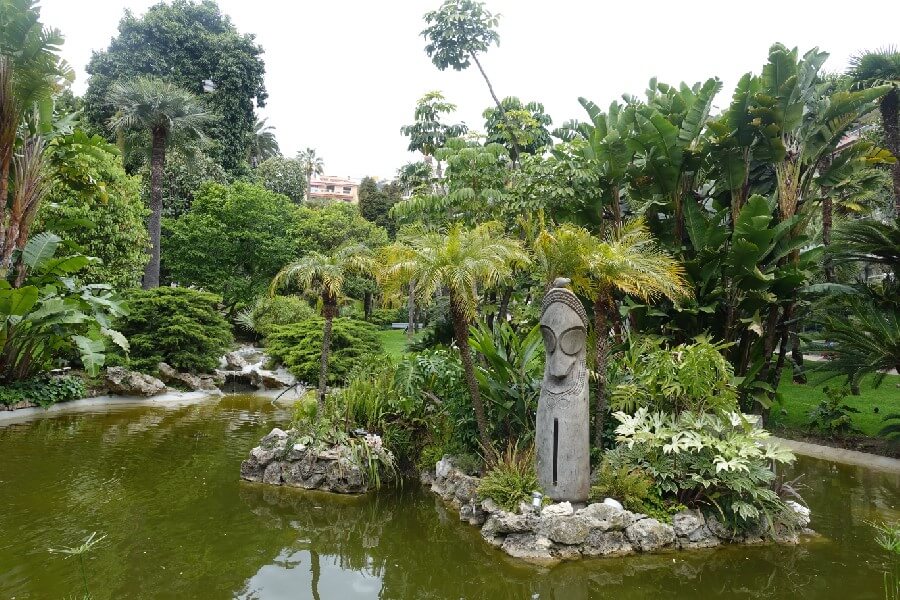 Just some of the different “environments” within the Monaco Botanical Gardens

The gardens feature a mixture of environments, as well as modern and tradition elements.  There are also plenty of places to sit and relax, which you need before you tackle the Casino and Café de Paris area. 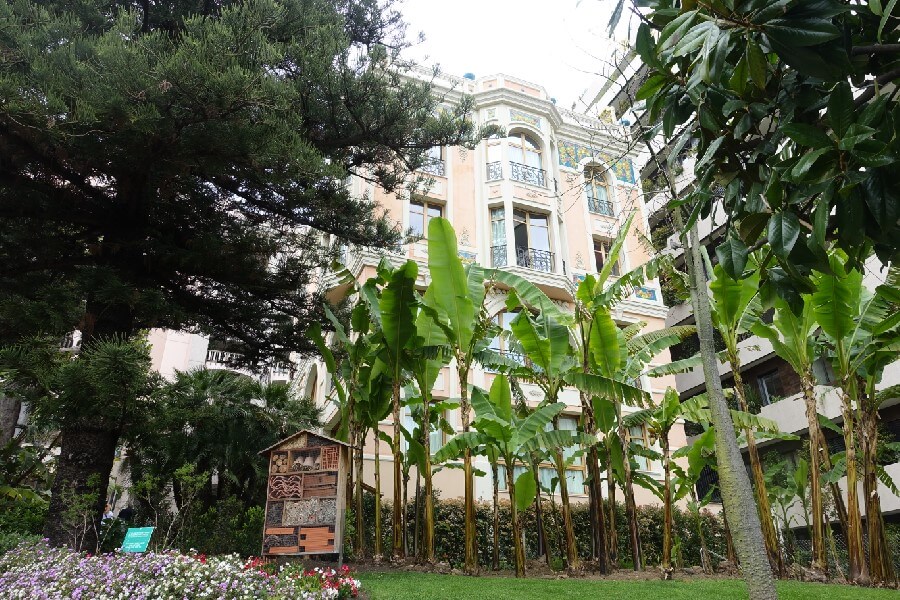 For some people the Casino and Café de Paris area IS Monaco and is an essential part of any Monaco itinerary.  But I must admit on a busy Sunday morning I just didn’t like it.  A heaving mass of tourists filled every seat at the Café, the souvenir shop charged a 50% premium over prices for the same items at the Palace shop, and the tour guides’ umbrellas were waving brightly to keep their entourages in tow.  And it costs EUR9 to enter the Casino.  Yes, that’s right you have to pay for privilege to lose your money. 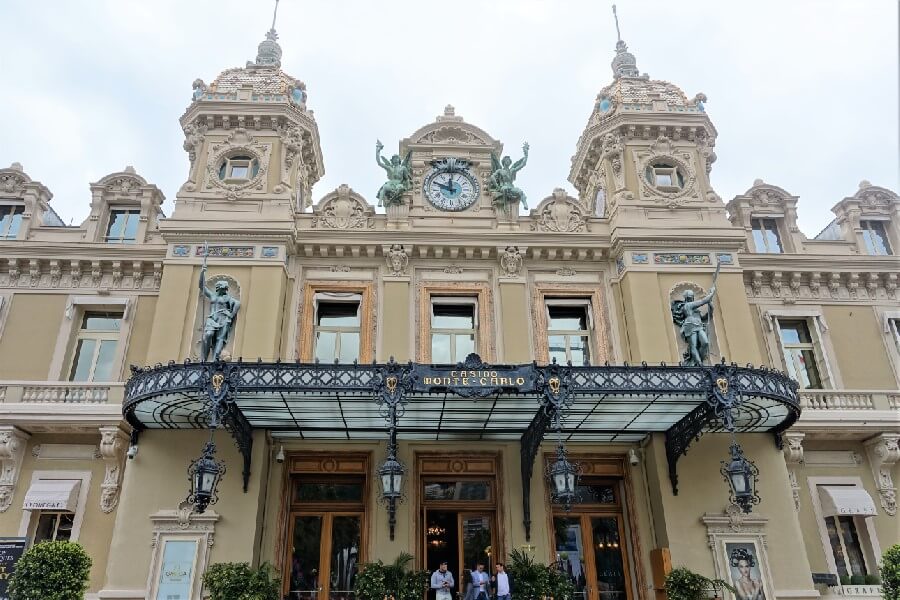 As close as I got to the Monte-Carlo Casino . For me it’s not one of the best things to do in Monte Carlo

Having said that, the architecture of the Casino building is genuinely pretty.  If you walk around the building to the waterfront façade it’s possible to enjoy it in peace, and take some quality photos without having to battle the selfie stick brigade. 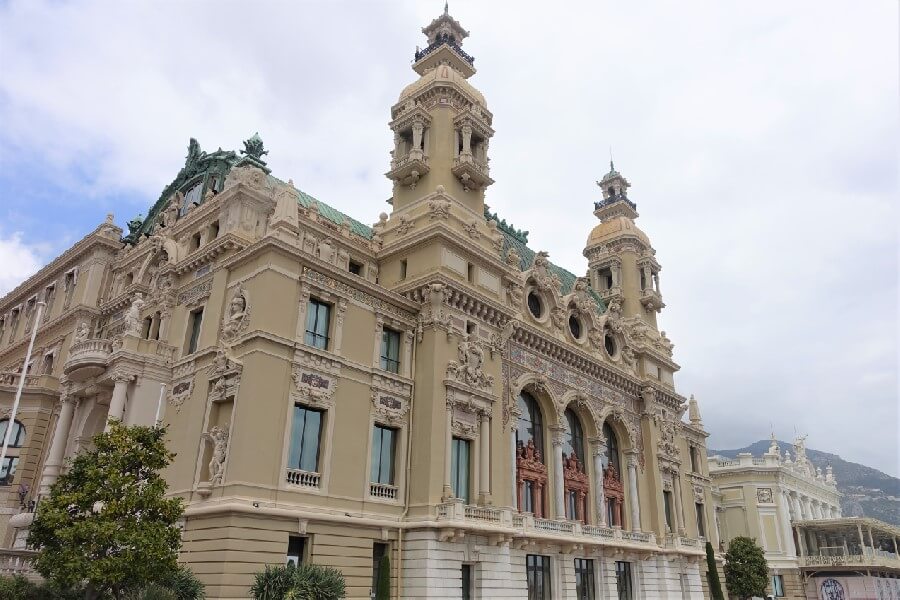 If you visit Monaco during late April or during May you can also watch the setting up of the streets around the Casino for the Monaco Grand Prix – and if you have a car, you can even drive the track. 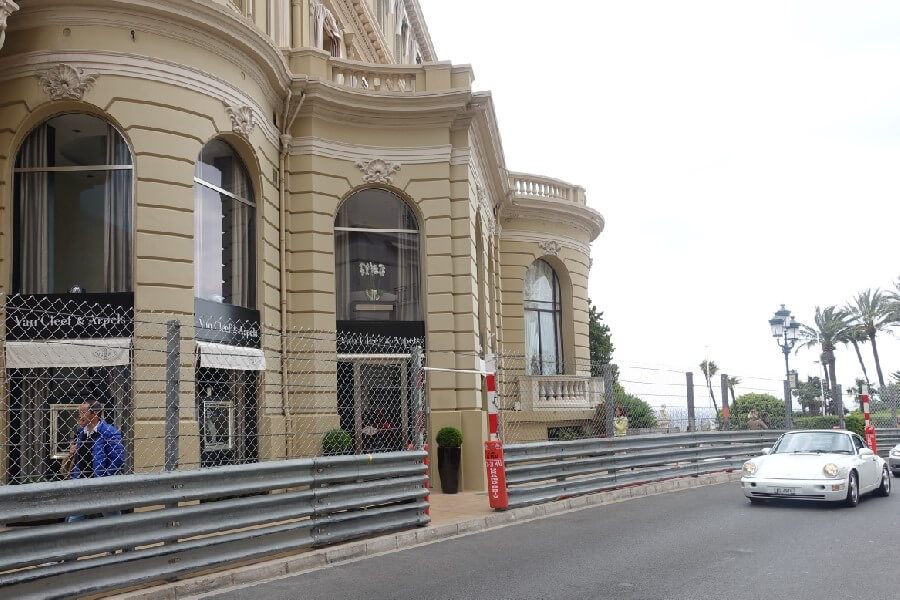 A pleasant walk is to follow the waterfront (and the race track) west to enjoy the views out over the port, the old town and a perfect view of Monte-Carlo.  Which part of Monaco is Monte-Carlo?  The area in front of the main port with all the apartment buildings that spills down towards the port is what is normally considered Monte-Carlo.  Yes, even in such a tiny “country” there are distinct regions.

When you reach the north eastern corner of the port area you can cross over and see the 18th century church of Ste Devote – dedicated to an 18th Century Monagesque saint.  It makes a poignant contrast to the high octane grand prix track and the high wealth port just opposite. 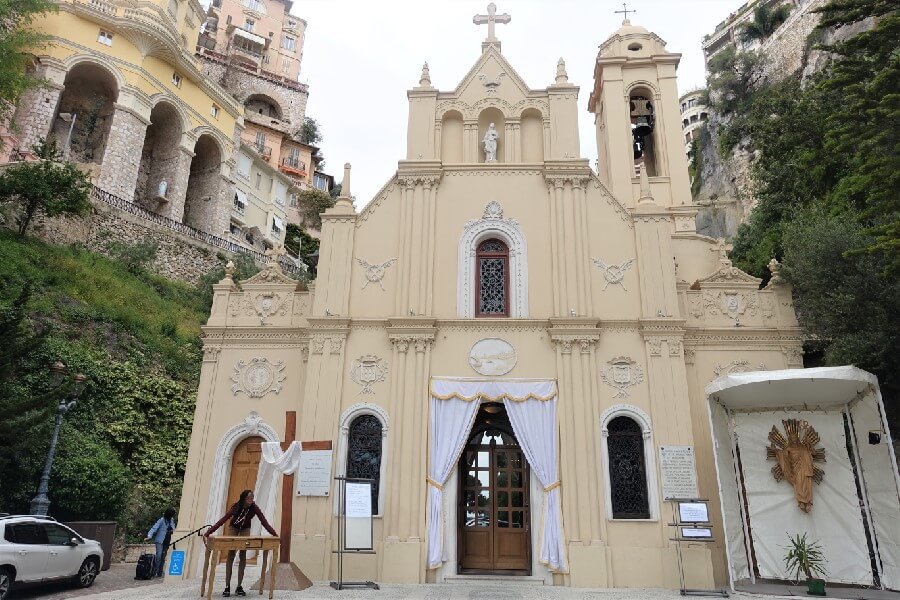 At this point you can either stay down near the water and keep heading west towards the old town area and the Royal Palace, or you can do what I did, and head upwards into the residential streets of Monte-Carlo. 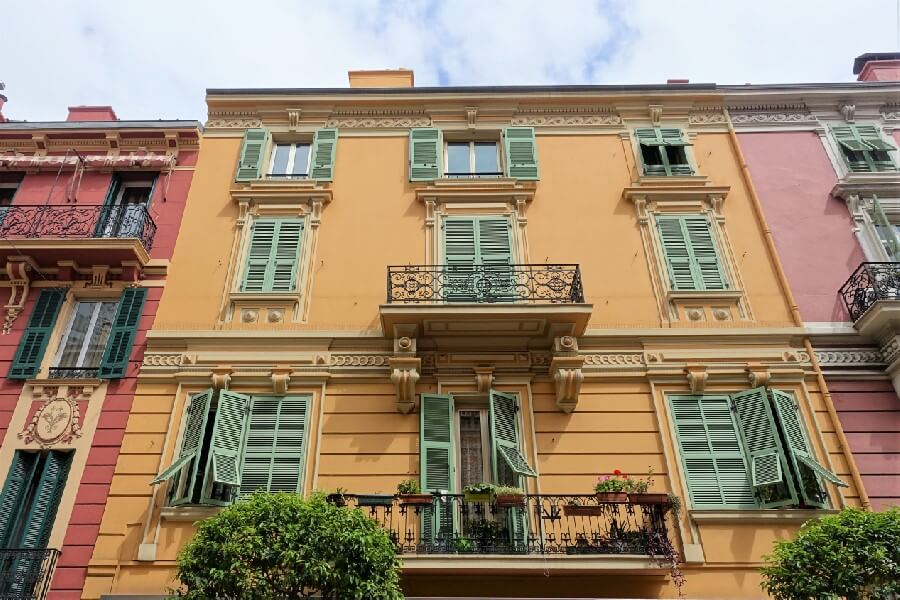 On Sunday a walk through the residential areas of Monte-Carlo was definitely a different way to see Monte-Carlo and Monaco in a day.  It was very quiet, and there were few people on the streets.  There was little traffic.  Everything was private.  Everything looked very expensive.  Somehow I think that’s just how the locals like it.  The architecture was interesting and varied.  There were pretty gardens.  It was all terribly tasteful – except maybe the red dog statue in a very fancy villa’s front garden.  That was kooky.  And no doubt terribly expensive. 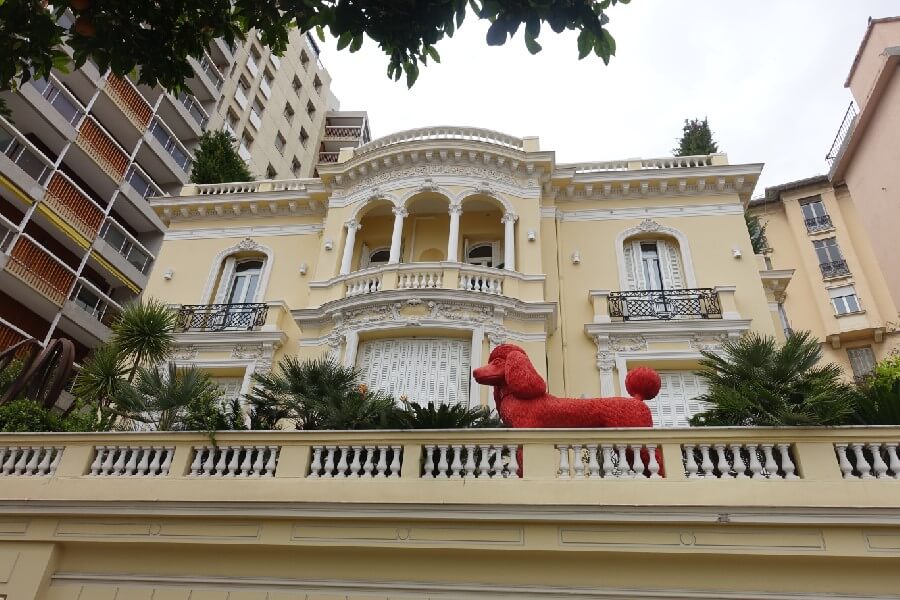 Traditional architecture and THAT dog…….

I wandered high up into the hilly streets of Monte-Carlo until I was due north of the Royal Palace and the old town.  Then I used the network of stairs and lifts to reach the base of the hill (yes, another one) where the Royal Palace is. 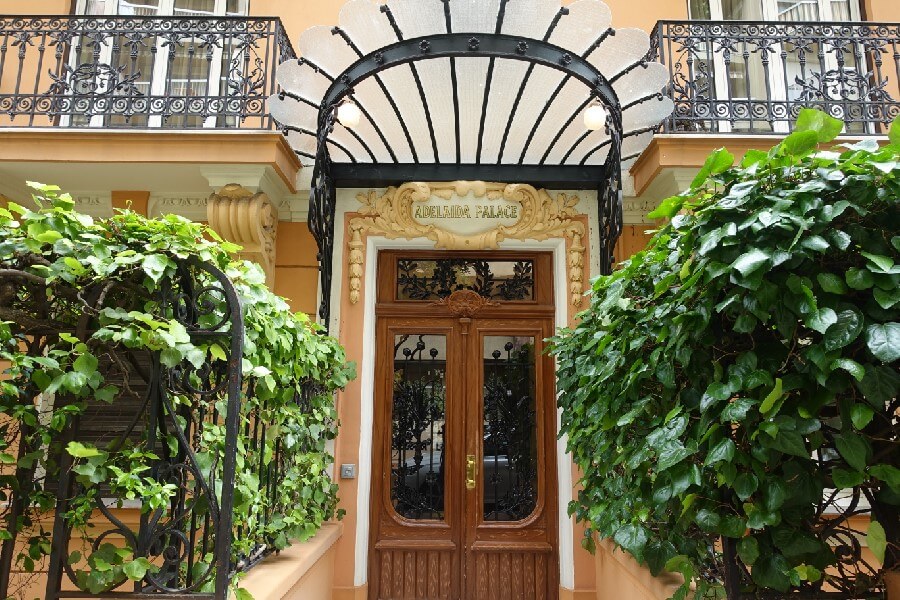 Even though you need to walk up quite a long hill, a visit to the Royal Palace is one of the best places to visit in Monaco.  You are not permitted to take photos in the Palace itself, but it is an interesting visit.  Just like the streets of Monte-Carlo the Palace was terribly tasteful.  Until the last room…..

The last room contained photos of eminent previous Princes and Princesses of Monaco.  But in pride of place, there it was – a family portrait of the current Grimaldi family, painted just prior to the death of Princess Grace of Monaco in 1982.  It was awful.  It was not tasteful.  It was just plain tacky.  It was completely unmissable in its awfulness………… 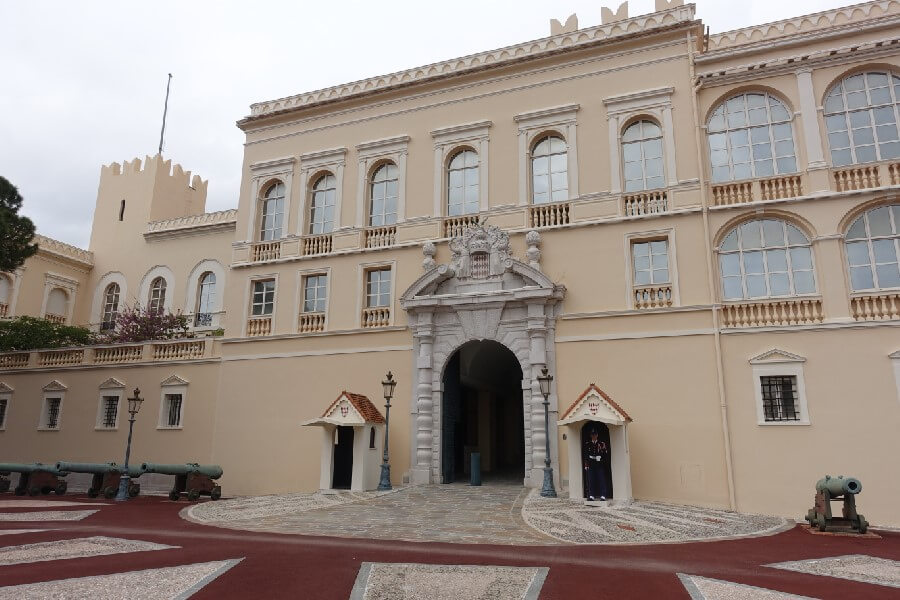 The square where the Palace is located affords some spectacular views from both sides.  It is also great for kids.  There is a uniformed Palace guard who does a little marching display every hour.  There is space to run around, and there are cannons to climb on. 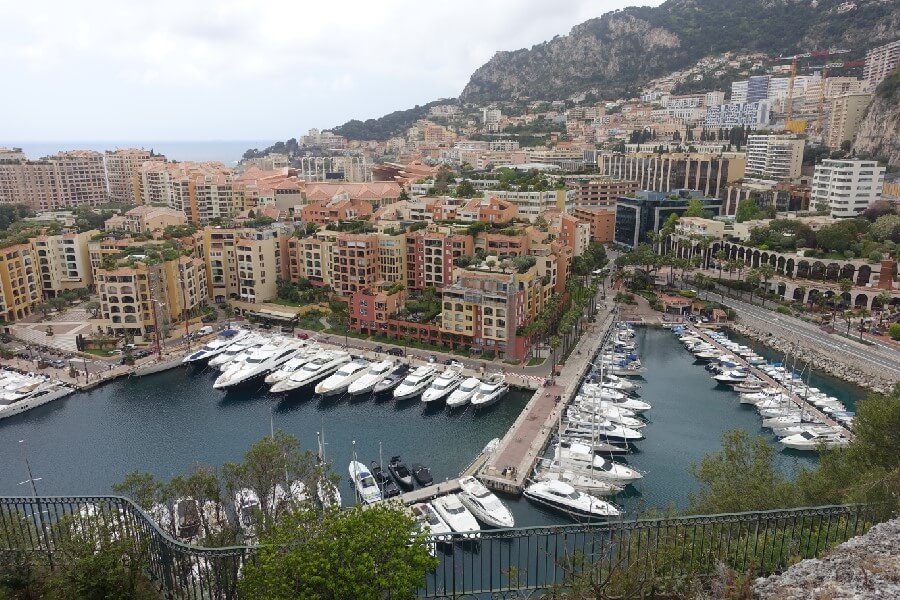 If you are looking to shop for souvenirs in Monaco, I recommend you do it here.  Those Ferrari Tshirts you saw back in the Souvenir shop near the Casino for €65 are significantly cheaper.  The Palace souvenir shop sells some particularly attractive (and very tasteful) coffee mugs if Formula One souvenir Tshirts are not your thing. 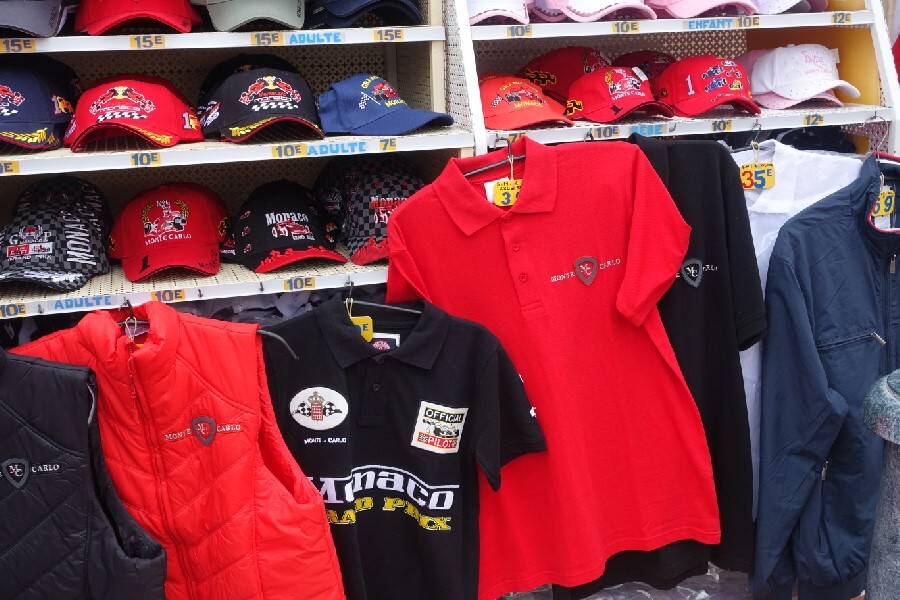 Buy that souvenir Tshirt near the Palace, rather than near the Casino

Opposite the Palace the old town spills back along the little peninsula.  And just in case you thought you’d left all that tackiness behind, there it is again.  Which is a shame.  The streets themselves are very pretty and quaint – all narrow and crooked, with pretty coloured buildings.  But the horrible tourist restaurants and cafés just ruin everything I’m afraid.  In search of some lunch I found a sandwich shop with jambon buerre – my favorite baguette of ham with loads of yummy French butter.  But this was awful – tasteless and so little butter.  And the bread was stale.  And it cost me EUR8.50 with a bottle of water.  Yet again, just when I thought Monaco would be refined, and oh so tasteful, she let me down again. 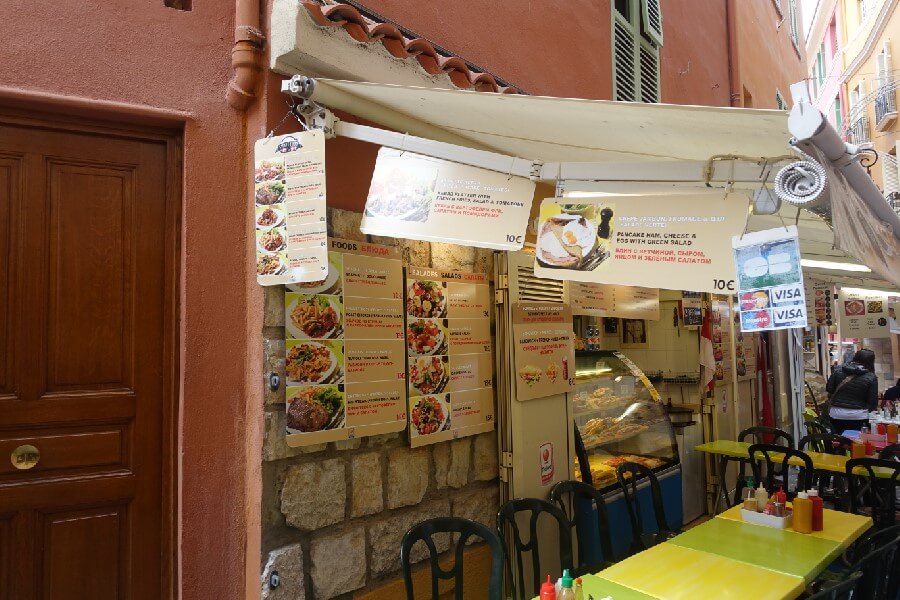 Regular readers will know exactly what I think of this scene…….

This area is also home to the Monaco aquarium, which I didn’t visit.  A lot of people seemed to be headed that way, so it is obviously popular. 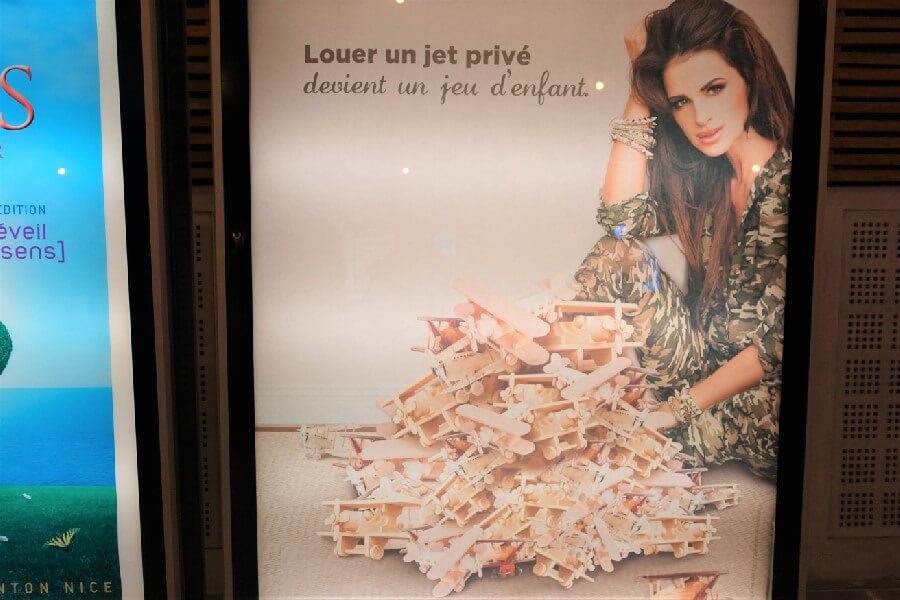 You know the locals are rich when there is an advert for private jets….at the local railway station

Is it worth visiting Monaco?

I have to say I thoroughly enjoyed my visit to Monaco and Monte-Carlo.  Yes, there are parts of the principality that are oh so touristy.  Yes, there are parts that are tacky.  But while Monaco is expensive, it is one part of the world where it’s easy to walk around and pretend for just a minute that you are rich and you belong there.  Yes, I thought Monaco was enchanting.  The residential streets are charming, the architecture is varied and splendid, and public transport is good.  I know you will not take a holiday to Monaco, but it is certainly one of the most enjoyable day trips from Nice, or the French and Italian Rivieras. 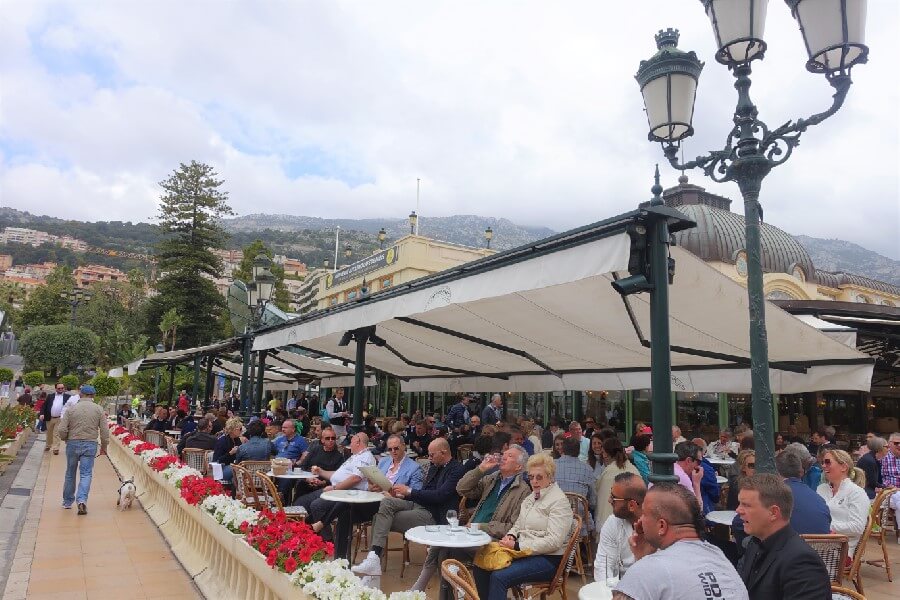 Author’s note:  I was a guest of Liguria Holiday homes in Pigna, less than an hour by car from Monaco.