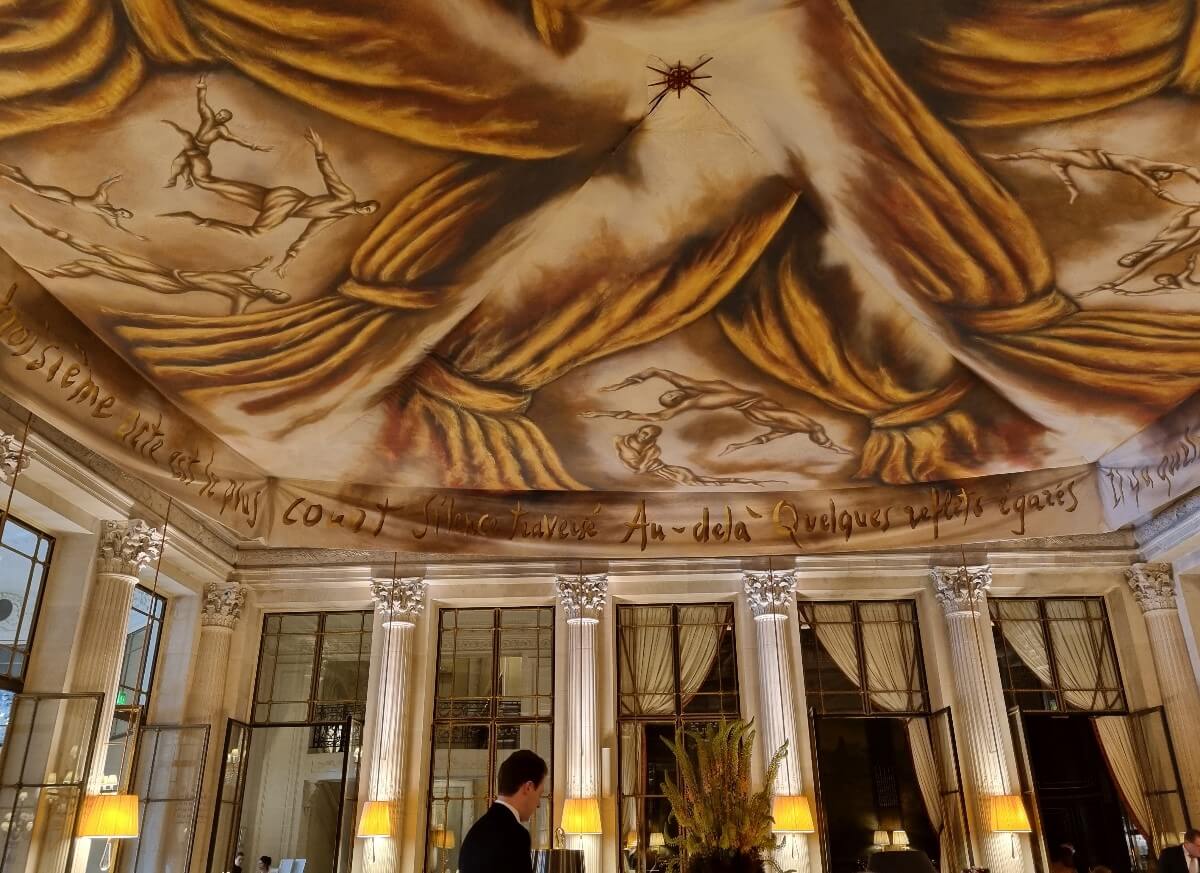 Booking is best made on the Le Meurice hotel website.  It’s a bit tricky to find, so you need to go to Dining menu and then choose Restaurant Le Dali.

We arrived right on time for our Paris tea at Le Meurice and were seated immediately.  I had chosen to sit on the banquette so I had somewhere for my handbag, but rather charmingly I was provided with a little stool to pop my bag on. 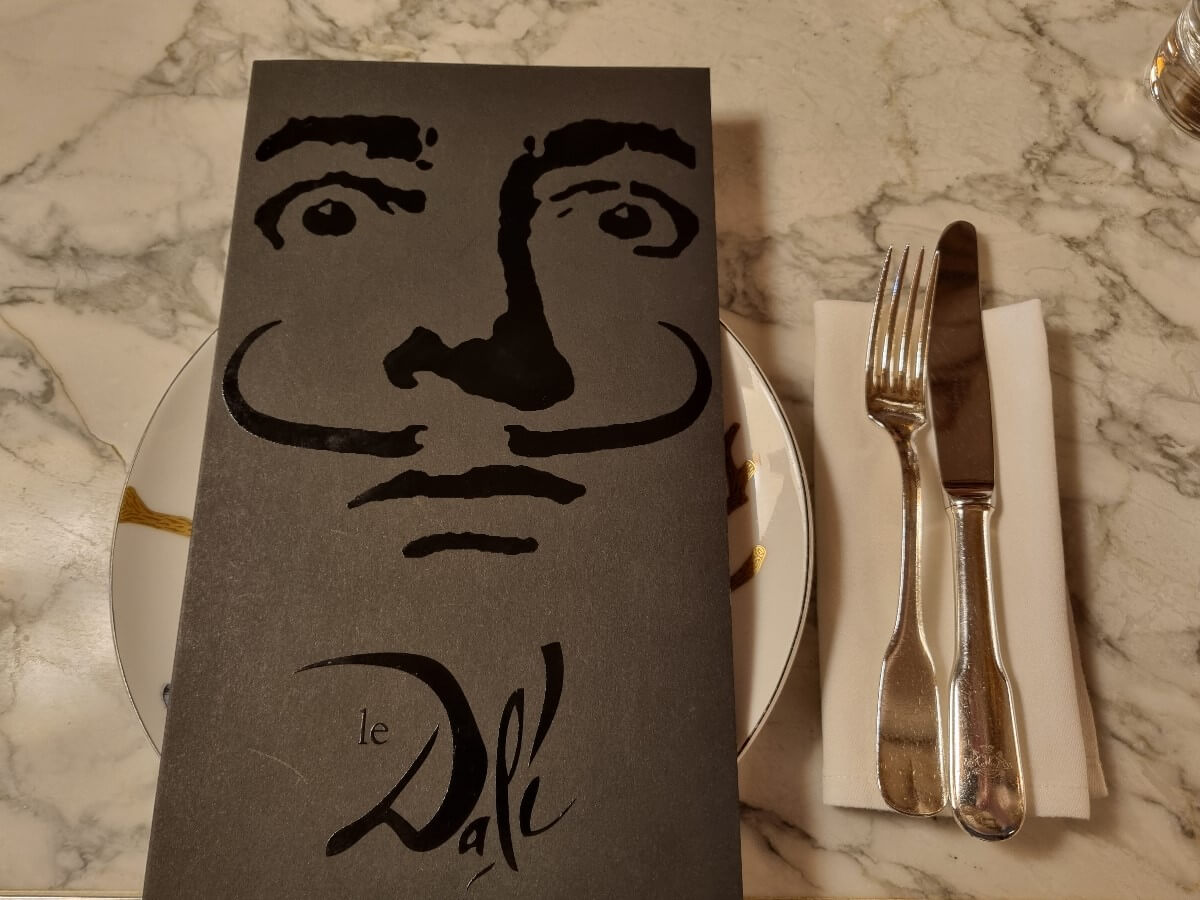 Our order was taken promptly and our Champagne was brought quickly, but then we sat – for quite a while until our afternoon tea arrived.  But once it came, boy, did it come.  In addition to the usual 3 tier afternoon tea stand, there was an egg timer (to time how long I wanted my tea to steep), tea pot and additional pot of hot water.  The little table we were sitting at was so crowded it was actually a bit silly and hard to navigate our way around.

But of course, afternoon tea is all about the food.  And I must say, the Le Meurice tea time food was scrumptious.  In fact, I think it is better than the afternoon tea I had enjoyed last time.  Everything tasted just as is should have and was so fresh. 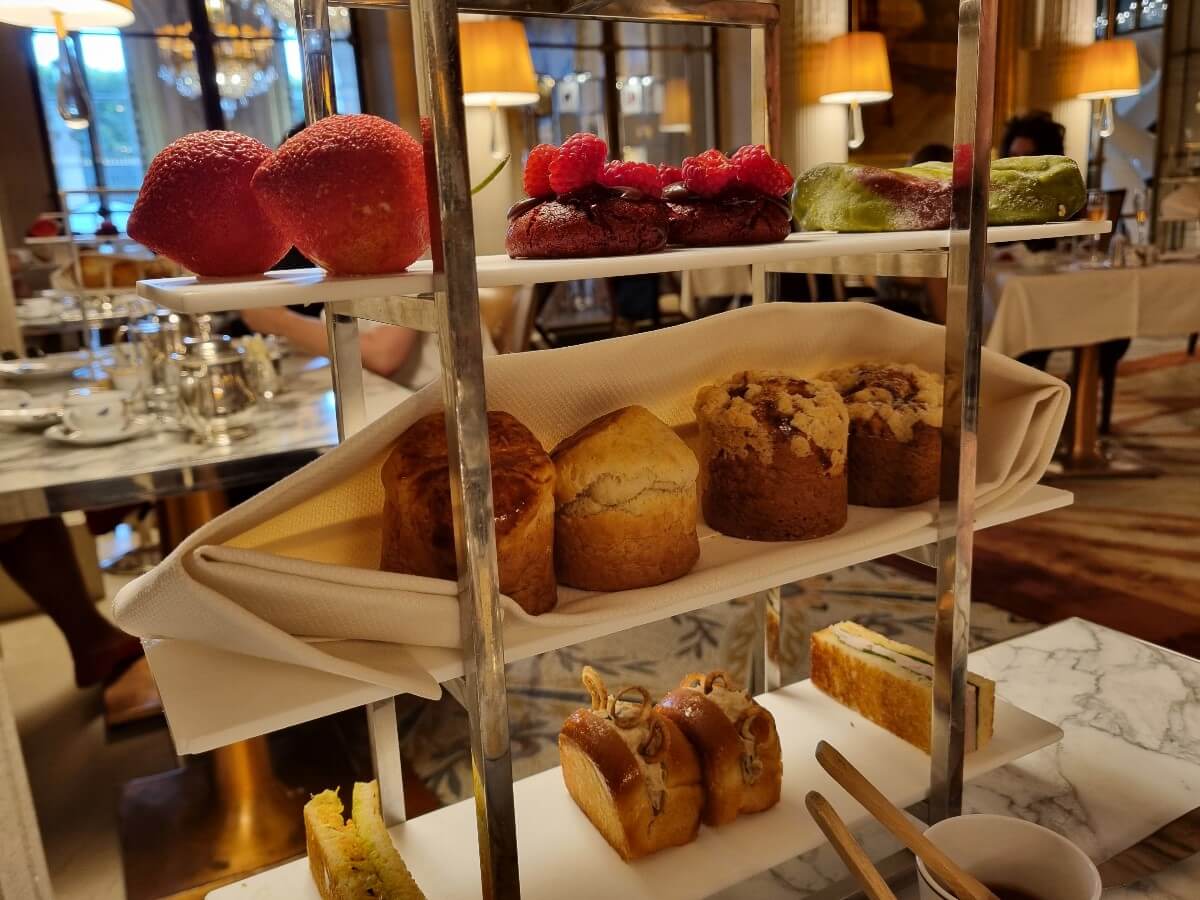 We started, of course, with a selection of sandwiches.  Each sandwich was made with a different bread and was lightly toasted.  I don’t know how they managed it, but the bread was still warm when our food arrived.  Fillings were classic – salmon, ham and my favorite a roasted vegetable in a light toasted brioche.

Next up was the scones with jam and cream.  We had two scones – one plain and the other with a crumble and quince flavoured swirl.  The scones themselves were warm, generous and tasted great.  But there was just one problem – not enough jam or cream!  A cardinal sin…..

The top tier of the stand was intriguing.  Three pastries.  A chocolate brownie with raspberry was straightforward enough and was just like how a brownie should be.  But then there was a strawberry.  Except it wasn’t a strawberry.  It was a strawberry cream mousse encased in a thin shell to look just like a strawberry.  And a pistachio.  Far too big to be a pistachio, but a perfect representation.  Inside the thinnest shell imaginable was a pistachio cream with pieces of pistachio.  The textures were perfect and the flavour was amazing – like the best pistachio you ever ate.  It was my pick of the 3 tiered cake stand. 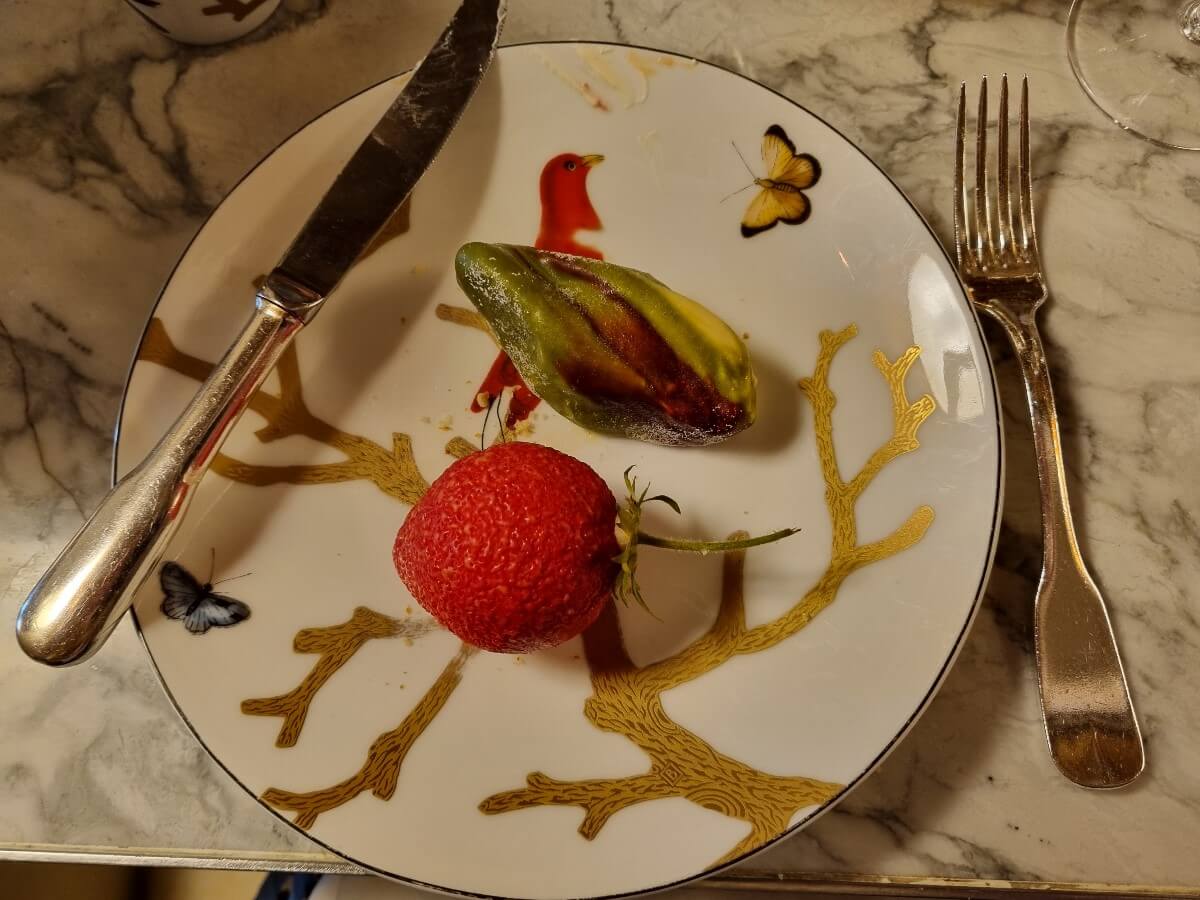 A strawberry and a pistachio – but better

But just when we thought we were done, out came the plate with something extra.  Would we like a slice of chocolate mousse cake?  Oh if you insist…….and we were so pleased we did.  No cake as such but a buttery, chocolately, delicious pie crust like a chocolate flavoured croissant pastry.  And then the chocolate mousse.  My goodness it was good.  Light, very chocolately and not too heavy to finish our afternoon tea.  A stunning finish. 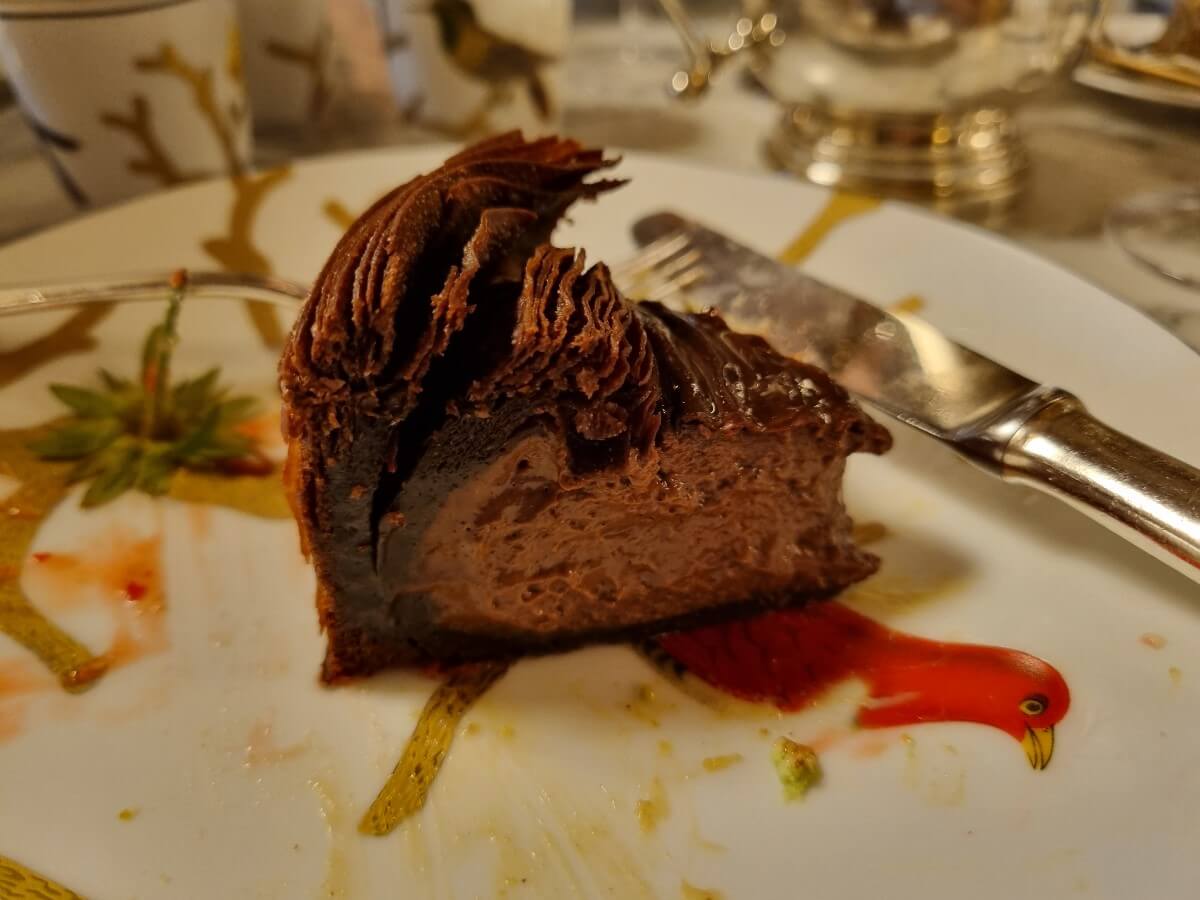 Apart from waiting a while for our tea to arrive, and also to pay our bill (no one was in a hurry for us to leave even though it was close to the dinner service) the service was polite and cheery.  The young man who brought our afternoon was being trained – and was clearly nervous as the more experienced waitress supervised him with eyes like a hawk.

It was French Father’s Day on the day of our visit, so was a Sunday.  The Restaurant was full of an interesting mixture of groups – family groups obviously celebrating, a large group of beautifully dressed French women, and numerous couples.  While there is no particular dress code for the Le Meurice afternoon tea (apart from no athletic wear), most people were wearing what was best described as smart casual.  Women wore white sneakers with their dresses and trousers, and most men wore long pants. 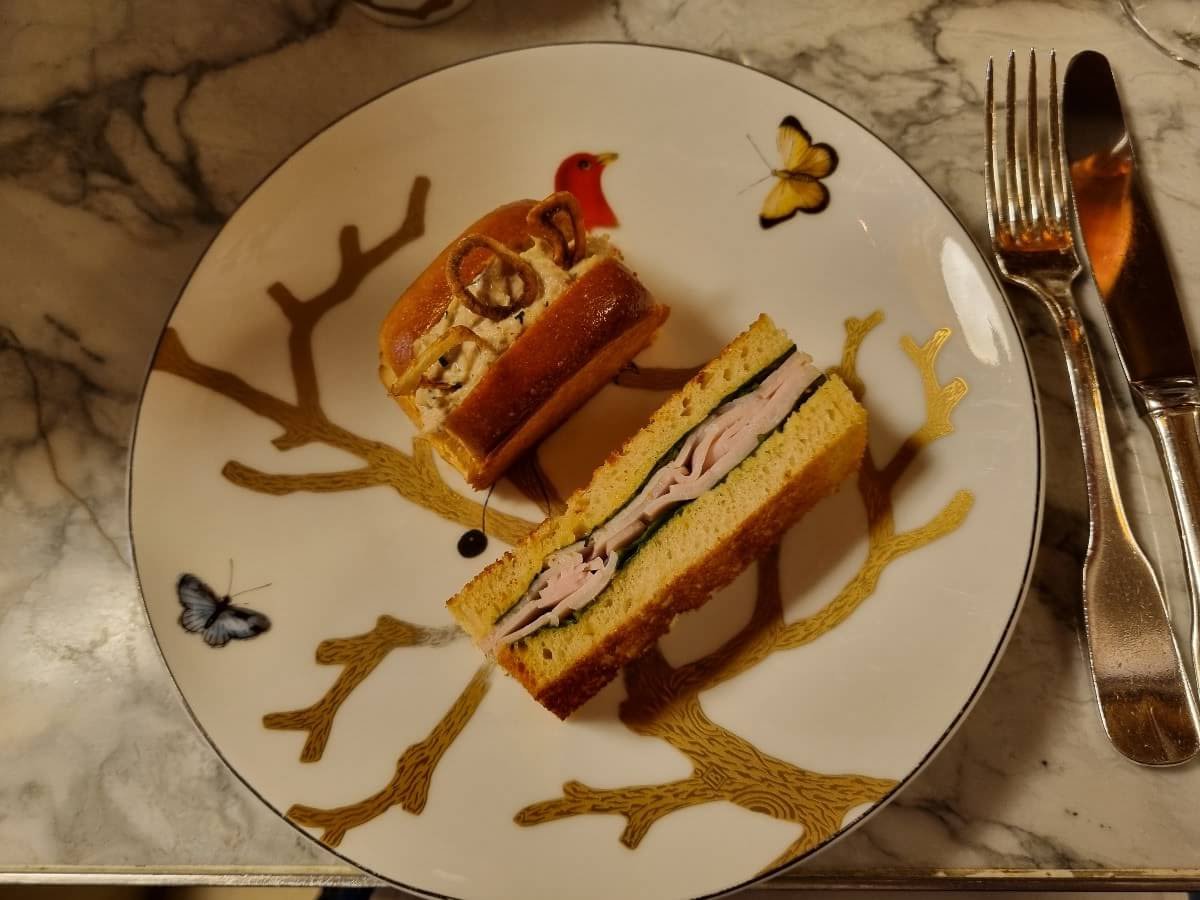 We enjoyed our Le Meurice tea time, but it was not perfect and I’m not sure if it is still the best high tea in Paris.  The table we were seated at was just a little small for the table setting, making the table seem quite cluttered.  We waited longer than necessary for our afternoon champagne tea to arrive.  While the food was delectable, there was no where near enough jam and cream for the scones.  Getting the attention of staff to pay our bill was more difficult than it should have been.

The Restaurant Le Dali is a beautiful room, and although it was full, noise was almost non- existent.

We would certainly go again, but a member of my France travel planning Facebook group (you can join here if you aren’t a member) has just come back from Paris absolutely raving about the afternoon tea at the Bristol – so Le Meurice definitely has competition.  High tea in Paris is well worth considering as a special experience.