Hi Frugalistas!  London is not necessarily known as one of the best walking cities in Europe – with its fabulous underground train network and huge crowds, walking is not always seen as the best way to get around London.  But when we visited London in the summer of 2019 we discovered one London walk that was well worth the effort.  Our Westminster walk proved to be one of the best London walks, and if you read on, you will see why. 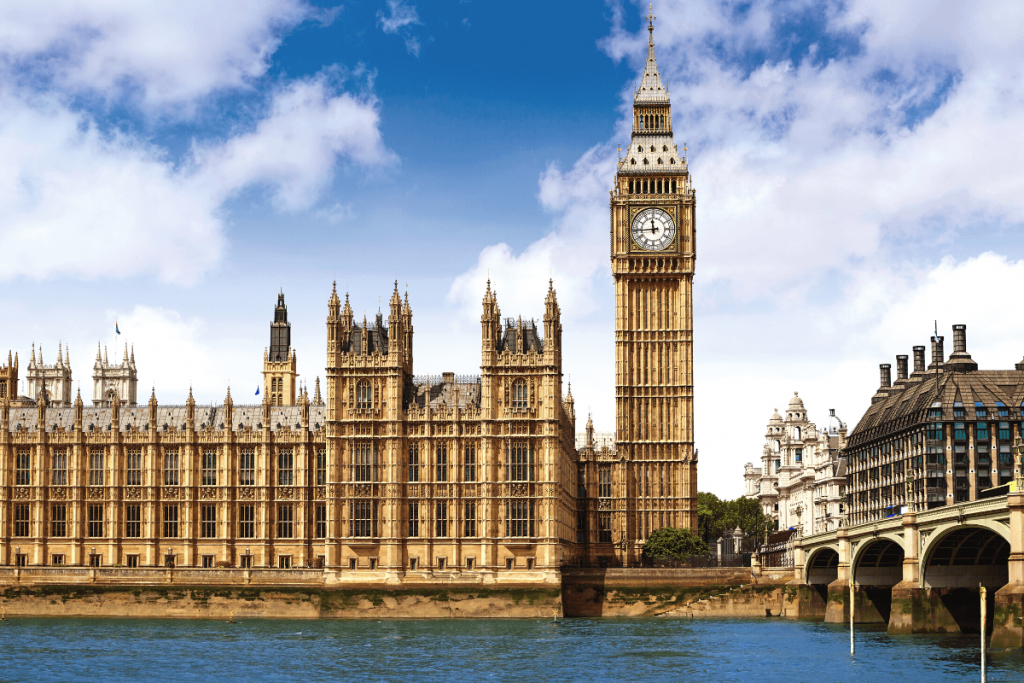 On your London Westminster walk you will enjoy:

Allow a minimum of 2hrs for this walk, although obviously much longer if you choose to visit any of the attractions.

There was no better place to start our London walk in Westminster than the Westminster tube station.  Unlike the very historic neighbourhood, the Westminster underground station is a vast industrial cavern.  You need to choose the Westminster Bridge exit which will bring you out directly opposite the Houses of Parliament and Big Ben.

It is highly likely the street and bridge will be packed with pedestrians, so for the best view of the Houses of Parliament and Big Ben, head left out of the station, cross the bridge and enjoy the view from the other side.  (Just on the other side of the river is the famous St Thomas & Guy’s Hospital, where Florence Nightingale amongst other medical history luminaries worked).

Big Ben has just undergone a major refurbishment and is back chiming and on full display.

It is possible to tour the Houses of Parliament if you plan your visit on the right day:

The best visit to Westminster Abbey

Upon entering, it was easy to see why.  On a dull London afternoon the Abbey was full, although not uncomfortably so.  We enjoyed the interior of the Abbey, including the poet’s corner commemorating various famous Brits – we were particularly interested to find Stephen Hawking, the famous astrophysicist who is the latest to be commemorated.

Mr Frugalfirstclass and I had both visited Westminster Abbey before, although it had been many years.  We were thrilled to discover it was possible to tour the upper galleries of the Abbey now.  At the time we visited it was an additional £5.00 to do so, but it was money very well spent.  Apart from being far less crowded than the main Abbey, the upper gallery was fascinating.  There were historical displays of all sorts of things, as well as the opportunity to see the roof architecture and all sorts of detail not seen from below.  But the best of all was the magnificent view of the Abbey below.  What we particularly loved was the stunning mosaic floor where the Coronation of British Kings and Queens occurs.  This was not able to be seen so well from ground floor level so was a special treat.  (Note photography in Westminster Abbey is not permitted.)

Leaving Westminster Abbey head across the Parliament Square Garden, featuring statues of Churchill and Gandhi and onto Parliament Street that turns into Whitehall at the Cenotaph, where British War dead are commemorated.  Just past the Cenotaph is Downing St, home to number 10.  One of the most famous addresses in the world, number 10 Downing St is of course home to the official residence of the British Prime Minister (you cannot enter Downing St, but can look from the barriers).

To continue our Westminster walk head back the way you came just past the Cenotaph to turn right into the newly named King Charles Street.  The bulk of the most impressive buildings on this street are civil service offices, including the offices of the Commonwealth.  At the end of the street you will find the Churchill War Rooms.

I must admit it would never have occurred to me to visit the Churchill War Rooms, but history buff MissG was keen, so we booked tickets to go.  You do need to book tickets, because, although you can just turn up, the queue to purchase tickets is extensive (we were told at least 2hrs on the day we visited in early July). 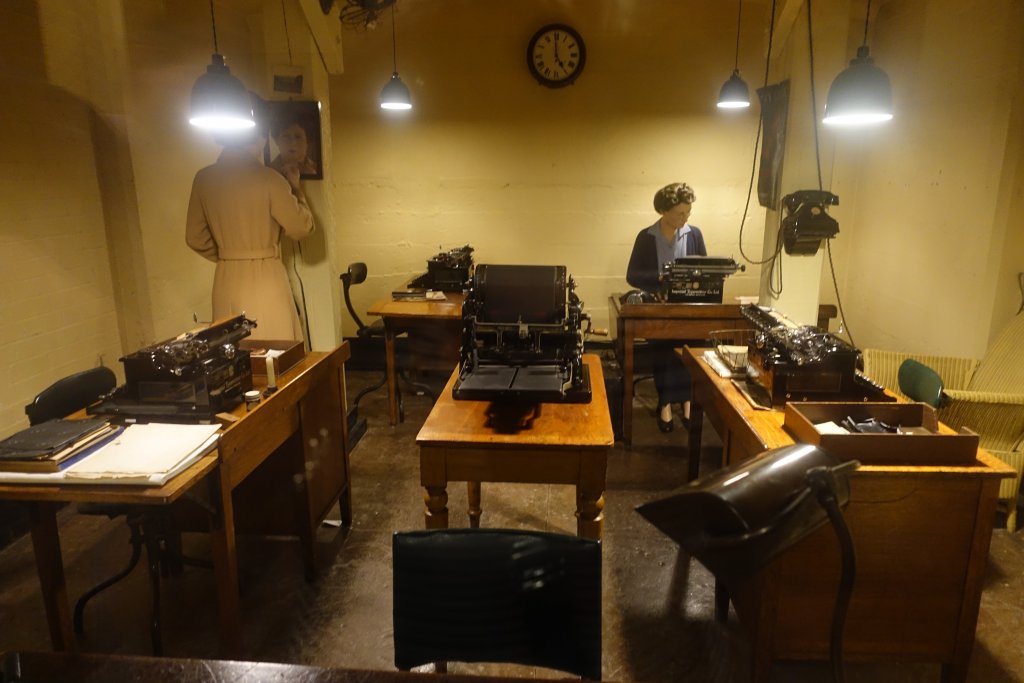 The Churchill War Rooms turned out to be one of best things we did on our London visit.  It was truly fascinating and very rich.  In addition to the war, there was also a lot of information about Churchill himself, including clothing, menus of food he ate and other ephemera.  It gave a real insight into this complex man.  But what I was most intrigued to see was a whole display given over to Fascism in England and the role of Oswald Mosley and Unity and Diana Mitford.  It was truly interesting, particularly if you are a fan of their sister Nancy Mitford’s writings. 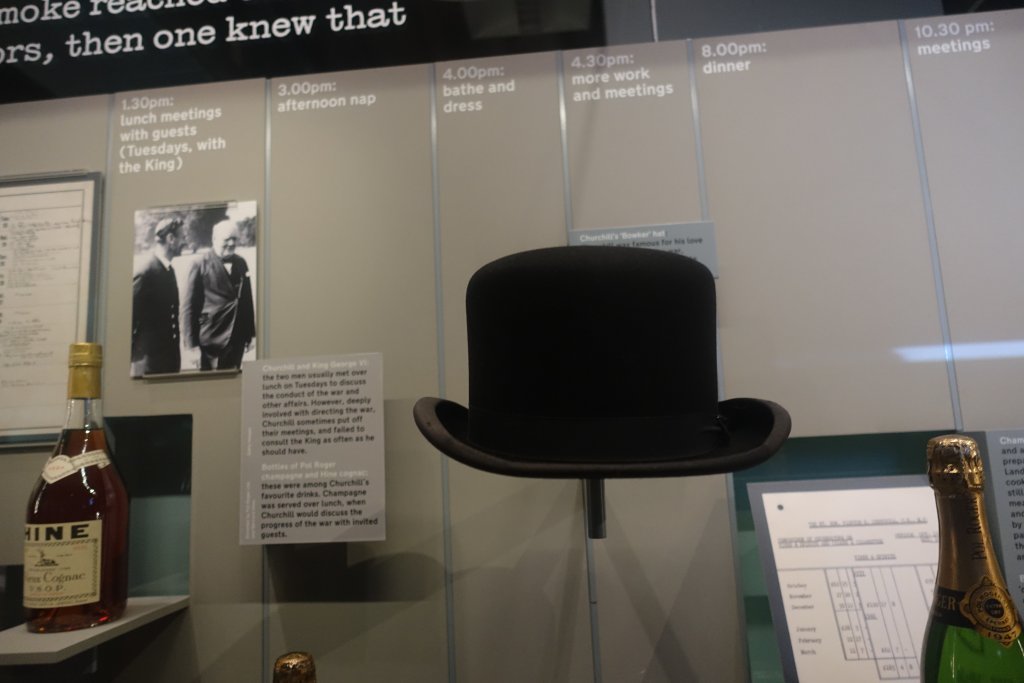 The visit to the War Rooms ends with a tour of the actual rooms where the British Cabinet lived, worked and slept during the darkest days of the Second World War.

If you are in need of a drink and snack there is a small cafe towards the end of the visit to the Churchill War Rooms. 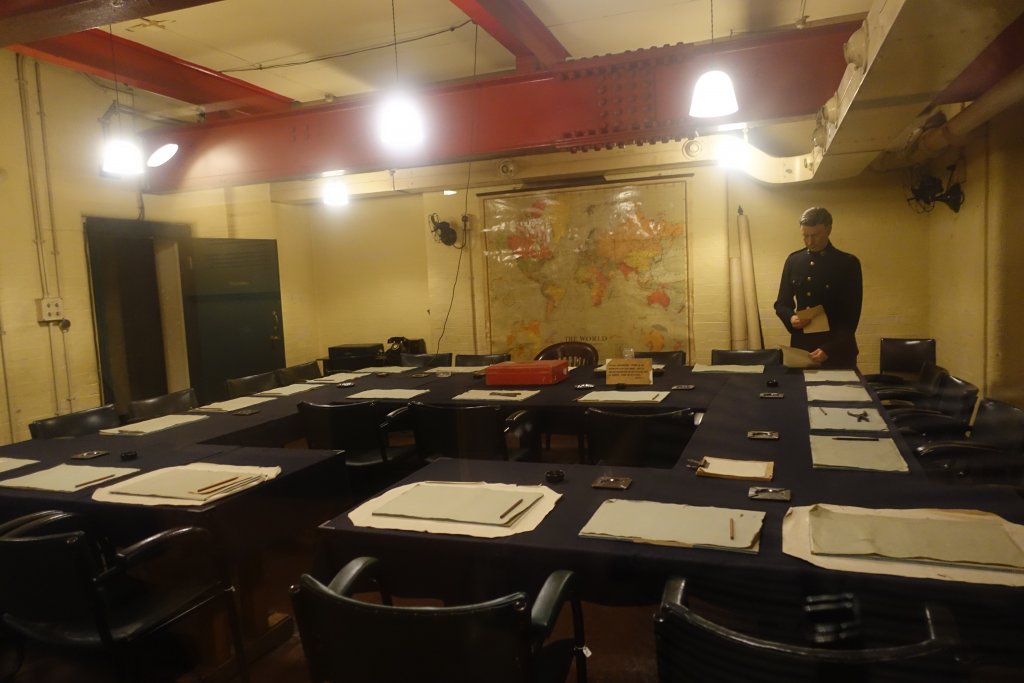 Wildlife in London – a walk in St James’ Park 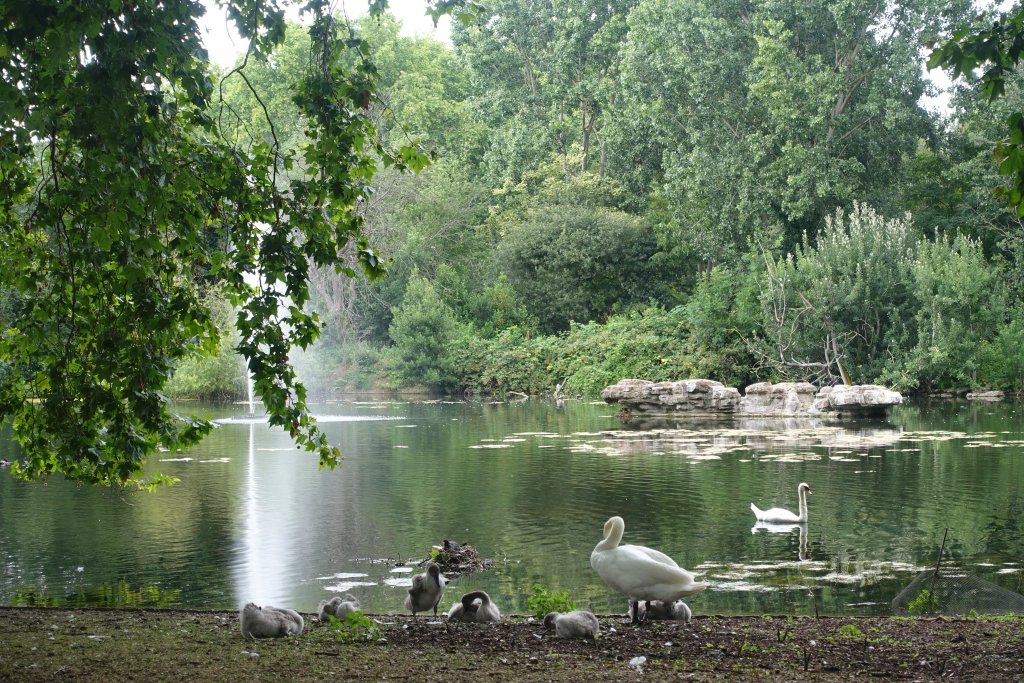 When you are finished in the War Rooms, cross Horse Guard’s Rd and head into the shade of St James’ Park.  St James’ Park is an excellent place to visit in London with kids – the squirrels and bird life are wonderful, and such fun to watch while sitting on one of the many shady seats. 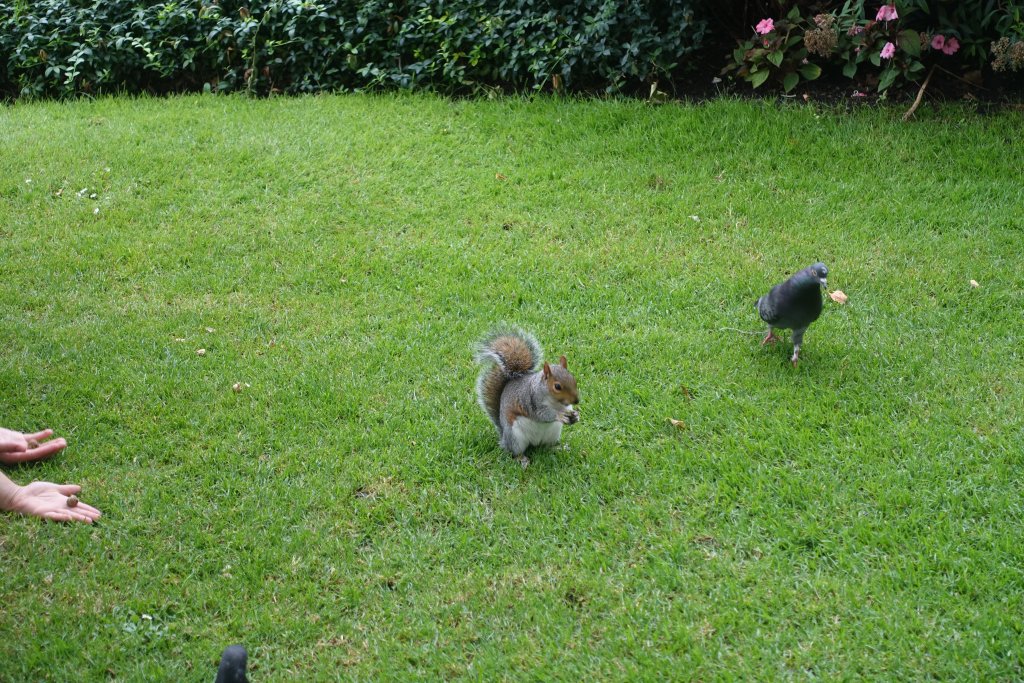 Walk The Mall and Buckingham Palace

When you have had enough time enjoying St James’ Park, head out of the park and onto The Mall where you see at the end (turn left as you leave the park) Buckingham Palace.

If you are visiting at the right time of the year (a few weeks in summer) you can visit the Staterooms of Buckingham Palace.  You can find out more about visiting Buckingham Palace and the Royal Family here >>

When you visit you can tell if the Monarch is in residence as the Royal Standard (the flag) will be flying from the flagpole.  While the late Queen spent her time in London at Buckingham Palace, King Charles has remained at his residence at Clarence House (which is on a side street off The Mall to the right as you face the palace). 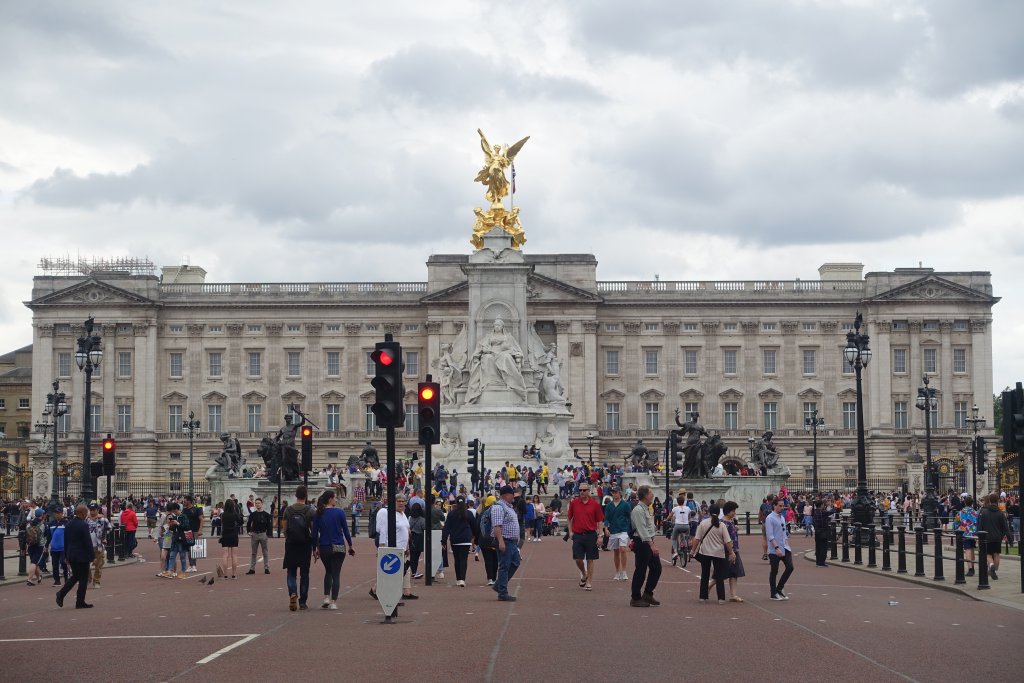 If you want to see the famous Changing of the Guard (one of the best free things to do in London) it takes place at 11am each day, but you should arrive an hour earlier to ensure a good vantage point.  If seeing this famous London attraction, you can easily reverse your Westminster London Walk or start it at Buckingham Palace rather than Marble Arch.

More gardens and the end of your London Westminster Walk

Walk along the right hand side of Buckingham Palace along Constitution Hill to end up at Hyde Park.  You can of course, also spend a lengthy visit in this famous London Park, but you have two other choices:  head to the left and end up at Harrods or walk along Park Lane (or in the park parallel to Park Lane) until you reach the famous, but slightly underwhelming Marble Arch.  From there you can either take the nearby Marble Arch tube station to your next stop, or head into Oxford St for some retail therapy.  You could also consider finishing your day in a special way with afternoon tea at the Ritz London.

I know many people prefer a guided tour, so it is possible to book guided tours of the Westminster borough: