Hi Frugalistas!  Barcelona is often cited as an example of overtourism – too many people ruining what is, at its heart, a beautiful and vibrant city.  On our recent visit to Barcelona, Miss G, Mr Frugalfirstclass and myself were able to find an authentic, untouristed version of Barcelona, courtesy of our Culinary Backstreets Barcelona food tour.  In addition to the best Barcelona food on offer, we were treated to a part of Barcelona far from the tourist crowds and the paella, sangria and fast food of the Ramblas.

There are four different Culinary Backstreets Barcelona walking tours.  With the ever picky, and only 16 year old Miss G with us, we agreed that the A Day in Sants – Feasting Off The Grid tour would suit us best.  Having spent our first day in Barcelona in the crowded and touristy centre of the city, we were anxious to escape the crowds and find some fun things to eat in Barcelona. 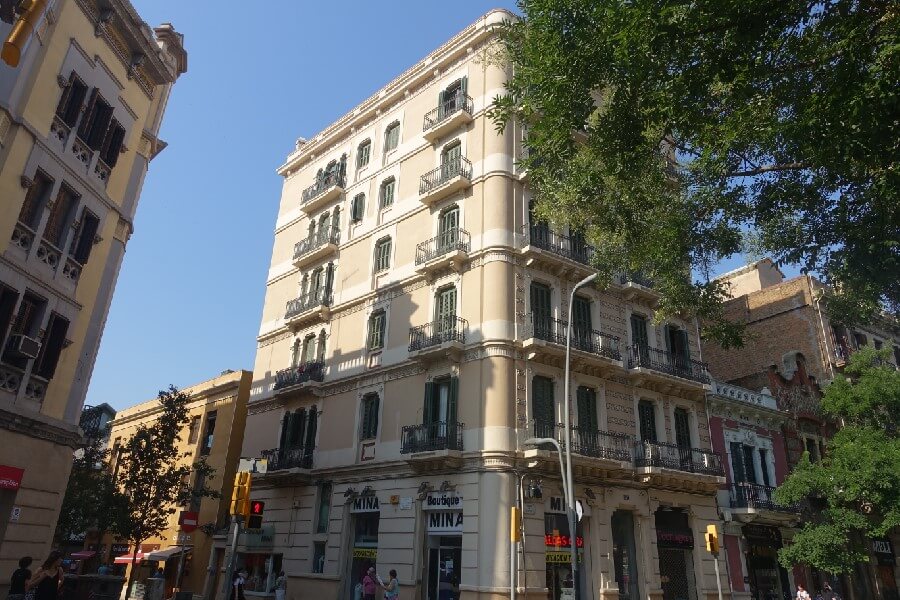 We met our guide Paula, and our two fellow guests (a young couple from New York) about five minutes walk from the Sants Market, our first stop.  On the way, Paula spoke a little about Sants and its history, which explains much about the neighbourhood to this day.  Originally a village outside Barcelona, Sants grew quickly in the nineteenth century as it had no taxes (in contrast to Barcelona).  The area was always a working class, with many factories and workshops.  It is traditionally a very political area – in current times this is reflected in the Catalan flags, yellow ribbon insignias for imprisoned separatists, and of course, street art.

I had heard about the Sants Market, which is newly renovated, so was very keen to visit.  Local authorities in Barcelona are currently undertaking a market renewal program throughout the city.  Le Bocqueria, just off the Ramblas, is designated as a market for both tourists and locals.  Other markets throughout the city do not cater specifically for tourists, and indeed, we were the only tourists or tour group in the market. 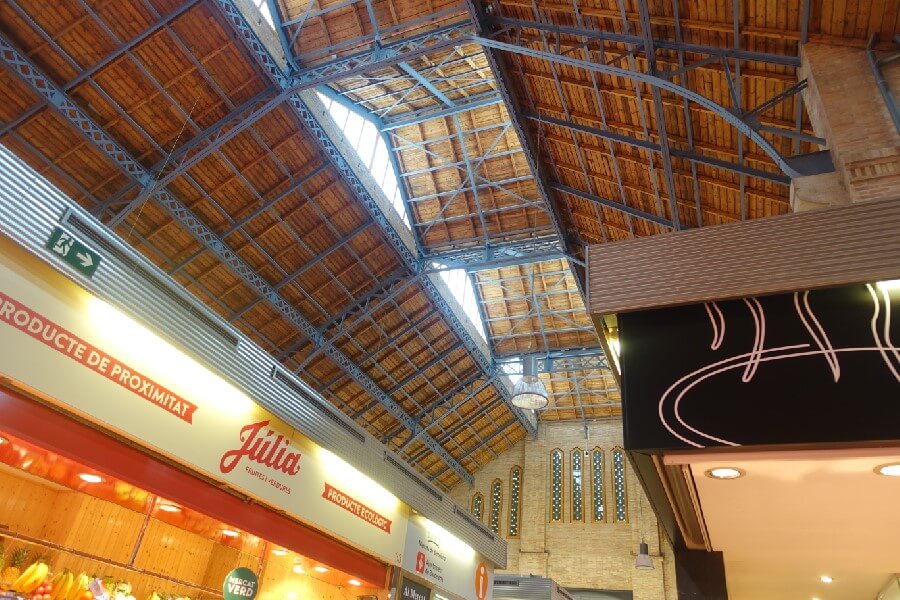 The airy interior of the market

Our Barcelona breakfast was a traditional “fork breakfast”, which in modern times is reserved for holidays or special occasions.  Consisting of spinach cooked in bacon fat with pinenuts and raisins (a 6000 year old recipe, modernised by the Romans 4000 years later by adding the raisins, according to Paula) and artichoke omelette, it was a gentle start to the day.  We also tried some olives preserved in vinegar, which were spicy from the vinegar and light in flavour.  After coffee we were on our way around the market. 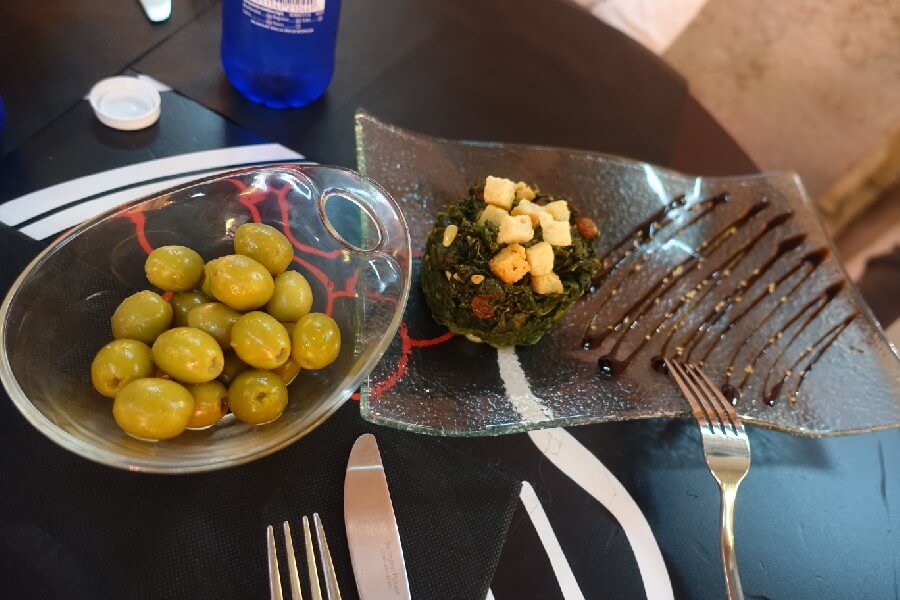 Part of our “fork breakfast”

We finished breakfast with a cod croquette, served cold, direct from the cod stall.

Barcelona food beyond the market

Our next stop was a deli just outside the market.  Our mission in this shop was to taste some cheese and traditional meats.

Paula very quickly corrects us about the use of the word salami – which of course is Italian.  Because we are in Spain we are eating llonganissa, and definitely not salami.  We tried two different types – both pork.  A white one which was cooked, and the more familiar pinky red which was air dried.  Both were very tasty, and Miss G, who was ambivalent at best about her fork breakfast, was happy to munch her way through both. 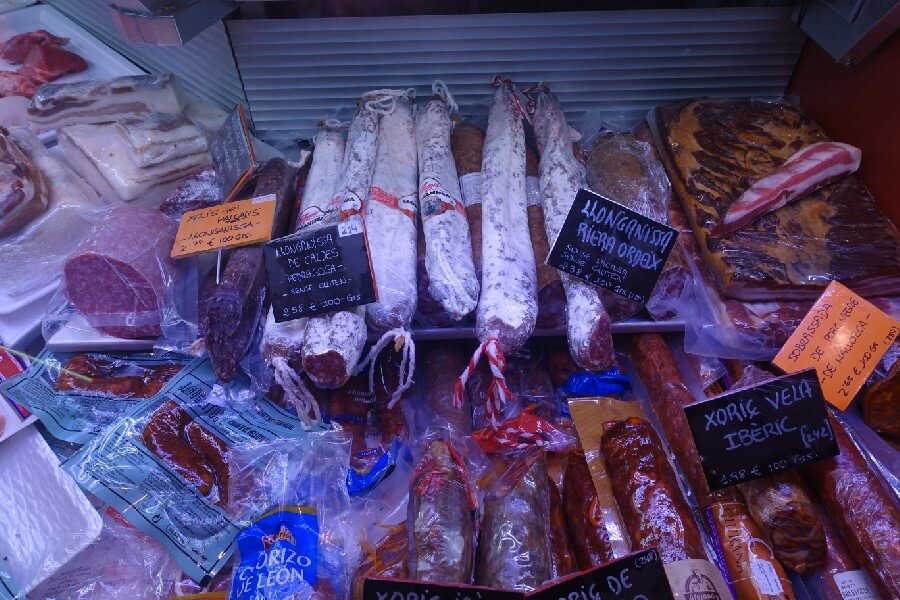 Say after me, this is llonganissa, NOT salami!

The three cheeses were Catalan specialties:  a sheep’s milk cheese which tasted like butter, it was so rich.  Then a cow’s milk cheese  rind washed with beer which was decidedly piquant, and finally a white in colour goat cheese which was surprisingly mild compared to its French cousin chevre. 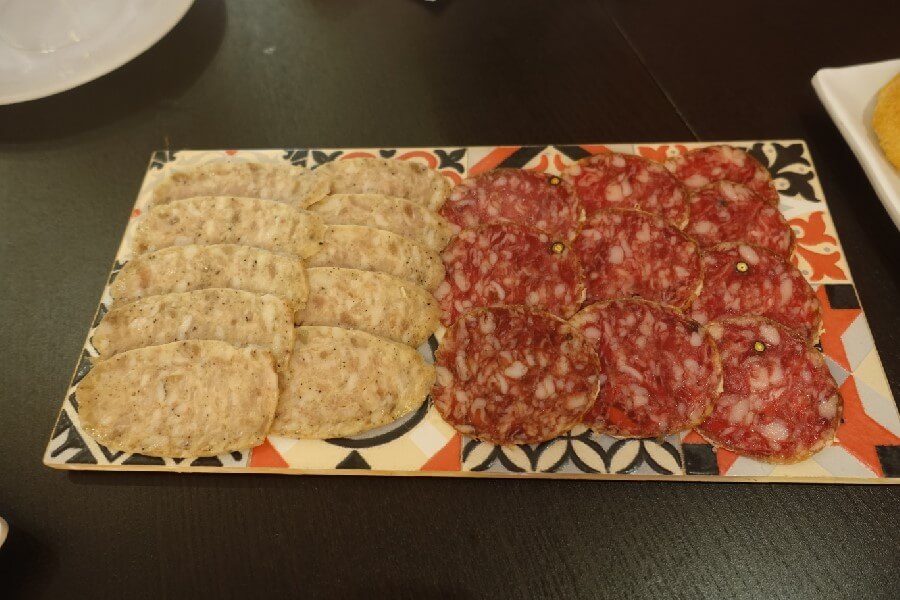 Accompanied by bread rubbed with tomato, serves of both were generous, and we were definitely ready for a walk. 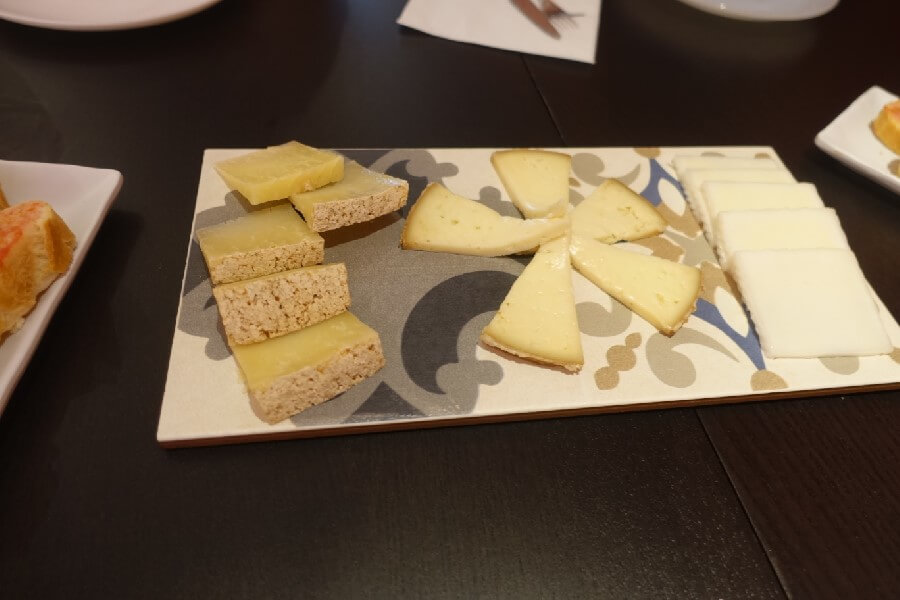 Our 15minute walk to our next stop took us deeper into the Sants neighbourhood.  Never mind no tourists – there were almost no people.  Unless you count the kids and parents enjoying the sunny day at the community garden that is.  We passed shady squares, with old fountains – completely empty.  Whole streets were empty. 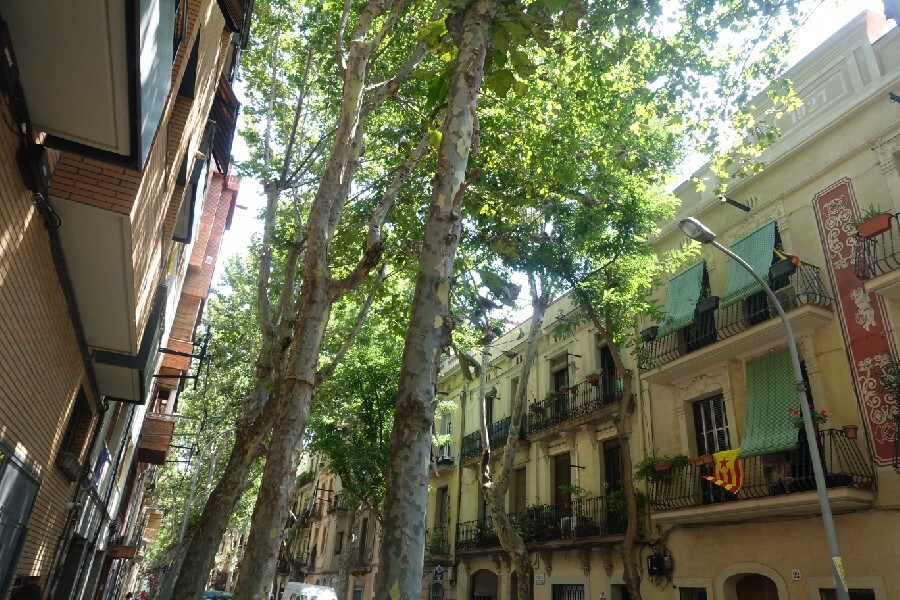 But even at 11.00am in the morning our 1880s bodega, or bar (one of the oldest in the city) was not empty. A table of what looked like regulars were already enjoying their drinks, newspapers and conversation.  Soon after they were joined by another table of workmen.  Despite the early hour, the joint was definitely jumping.  The only downside of this was the lack of opportunities for photos – I would have loved to have taken a photo of the bar, and the old wooden refrigerator.

Our task at the bodega was not to chat and read newspapers like the locals, or take photos like gawking tourists.  Oh, no.  We were tasting Spanish vermut (vermouth), anchovies and more olives, with a lemonade in place of the vermouth for Miss G. 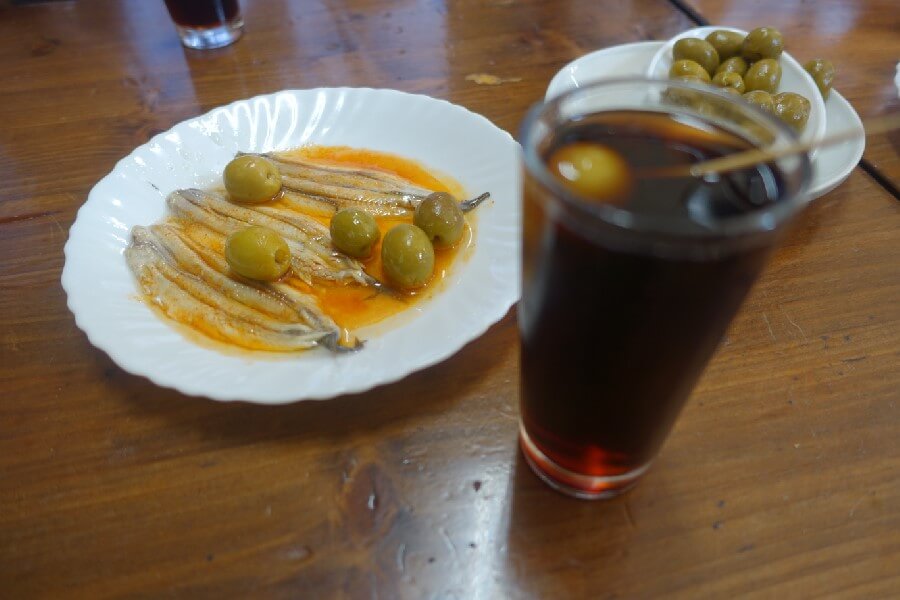 I was familiar with vermouth from my youth, served with Coke at the pub, but it was many years since I’d had it.  Paula initially invited us to try the vermut neat – which reminded me very much of Coke with a hint of cinnamon.  We then topped up the glass with soda water from a “vintage” soda fountain, which looked like it came from the 1940s or 50s. And surprise, surprise…..the vermut changed flavour to be more like straight coke.  It seemed very different, and far more sophisticated than the Italian version of my youth.

To accompany our vermut we were offered olives, this time prepared in a style known as “grandmother olives” as they are often made at home.  These were spicy and garlicky, but the olives themselves were again quite mild in flavour.  Then two types of anchovy, both of which went perfectly with the vermut.  Miss G passed on the anchovy, so I’m not sure how they went with her lemonade.  Paula showed us how to skewer the anchovy neatly with our toothpicks so we could eat them in one mouthful.

A quick group photo (which appeared in the form of a postcard from Paula at home a couple of weeks later), and a quick chance for me to get a shot of the gorgeous old tiles on the wall without photographing the locals, and we were off to our next stop – to eat chocolate. 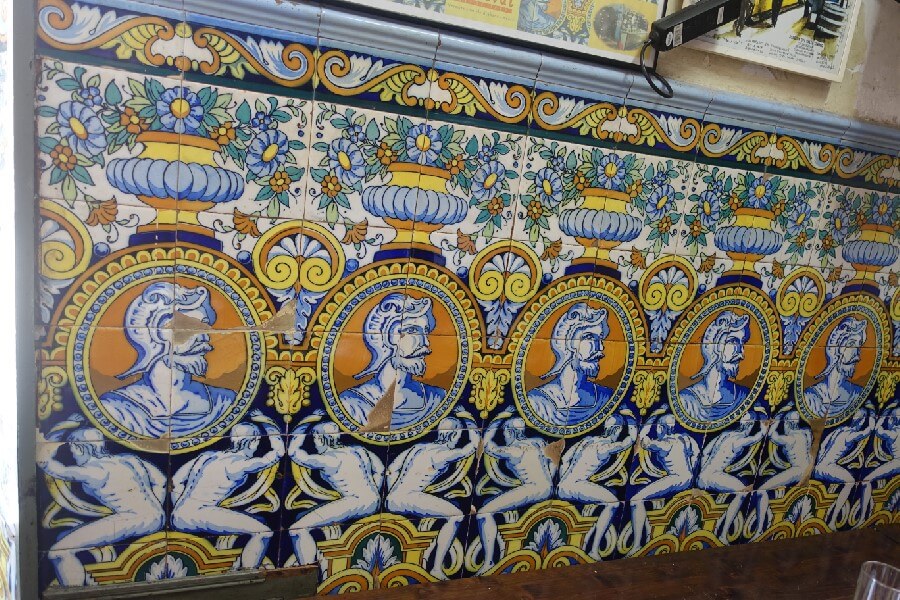 But first, we visited an old factory area, now being revitalised as more community space.  The factories had originally been owned by the family that owned the Casa Batillo, the well known Gaudi house back in the Eixample.

The chocolate shop we visited was air conditioned – much appreciated on a warm and quite humid July day.  Dating from the early 1960s, it supplies many up market restaurants and hotels back in the centre of Barcelona.  Because the chocolates were made on site the smell was gorgeous and the manufacturing staff were smiling and friendly.  We tasted a variety of chocolates, including an intriguing chocolate coated corn kernel, which was surprisingly good.  A cocoa dusted treasure with three layers of chocolate – dark, white and powdered – is a specialty of Barcelona.  We also enjoyed a liqueur cherry dark chocolate which was rich but not at all sweet.  Miss G pronounced her praline alternative (she was invited to choose something for herself from the display cabinet) “delicious.”  If you want to buy a souvenir from your walk, do it here. 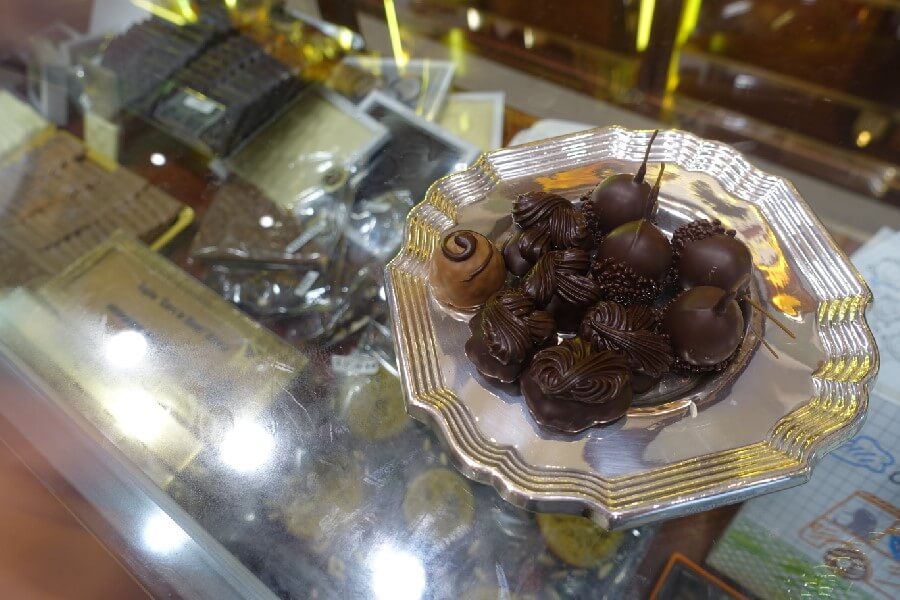 After our chocolates we headed into a nearby bakery, for what we thought were more sweets.  But no, as well as a glass of local cava (a light local sparkling wine, not to be confused with the Pacific Island hypnotic drink of the same name spelt with a K) Paula proudly sat us down to share a sweet pastry, dusted with, um, powdered pork crackling.  The pastry is a true Barcelona traditional food not made anywhere else in Spain.  Despite the somewhat odd combination, it tasted genuinely delicious. 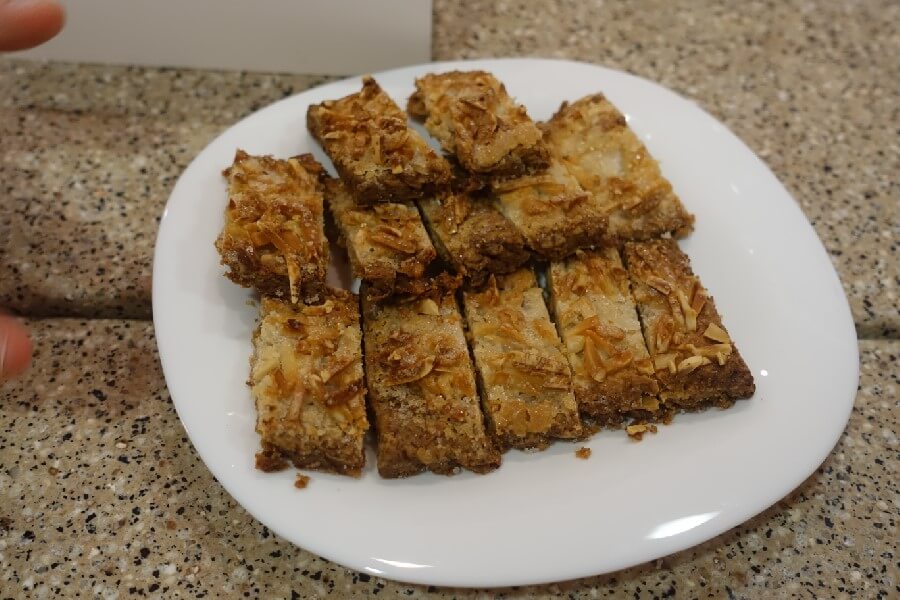 I didn’t catch what this was called, and while the flavour was unusual, it was tasty and delicious

Despite all this food, Paula announced it was lunch time, so we headed off to another bodega for lunch.  At last we were somewhere that looked familiar, as we were only a few minutes away from the Sants station, where we had arrived in Barcelona.  Entering the bodega however, you could have been a million miles from the station.  Dating from 1939, I suspect the bodega had not been redecorated since, even down to the 85 year old owner in the kitchen, with her sons running the floor.

We started lunch with scrambled eggs with asparagus, mountain mushrooms (collected by the family outside the city, of course), and prawns.  Then a light stew of squid and white beans.  Served with a light red wine, it was a tasty and quite filling meal. 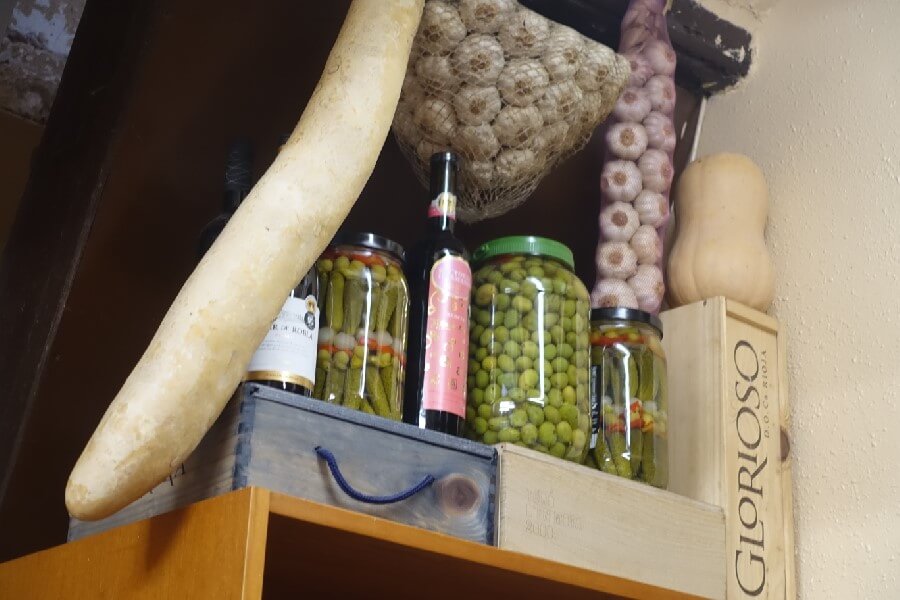 Homely touches in the traditional bodega

Our last stop was a somewhat inauspicious looking ice cream shop.  But it was an ice cream shop that served traditional milk drinks.  Mr Frugalfirstclass and I both chose the merengada, a thickened milky drink that tasted a bit like lemon custard or rice pudding without the rice.  It was a refreshing end to our 5.5hour meal, and our walk.  Miss G went for the traditional chocolate ice cream and was not disappointed.

Before we said good bye to Paula she took us back to the metro and our train back to the crowds of central Barcelona, with a complimentary copy of the Culinary Backstreets Barcelona food guide – full of inspiration on where to eat in Barcelona for our next visit.

What I thought of our Culinary Backstreets Barcelona day tour 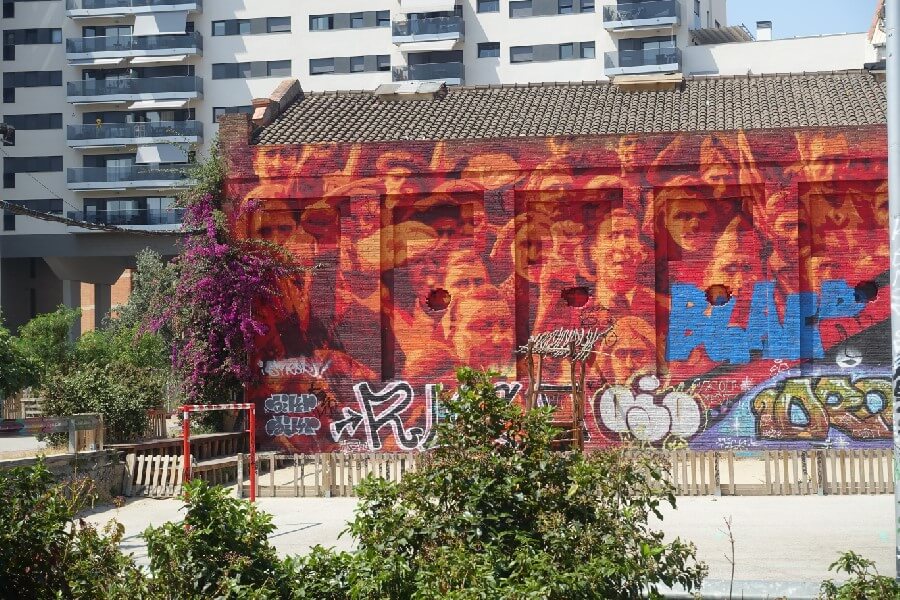 The walk is about 5.5hours long and costs USD135.  There were a few inclines, without being hilly.  If you are doing the walk in summer it is worth bringing a hat as shade is limited in some streets.  We were given plenty of water to drink, so hydration was not a problem.  The walk is suitable for older children.  Despite her pickiness, Miss G had plenty to eat, and was offered non-alcoholic drinks in most places we visited.  There was quite a lot of meat and dairy on this tour, so while vegetarians can be accommodated, some vegetarians and most vegans may feel more comfortable booking a specialised Barcelona vegan food tour.

If you are looking to photograph locals in Barcelona, this is not the place to do it.  Because this part of Barcelona is very political, and not used to tourists, be very cautious when taking photos.  It is best to check with your guide before photographing anything other than walls, ceilings and the food.

Paula warned us before the tour that we would not like everything we were going to try on the tour.  Whether you like everything you try or not is beside the point, although I think true food lovers will love this tour.  The Culinary Backstreets A Day in Sants – Feasting Off the Grid tour is an excellent way to find different places to eat in Barcelona.  You will eat Barcelona cuisine, in a very local and traditional Barcelona neighbourhood, and it’s a fun way to tour Barcelona.  Yes, Barcelona may be suffering from overtourism, but with areas like Sants, and sensitive tour operators like Culinary Backstreets, all is not lost, yet.

Author’s note:  we were offered a media rate for this tour.  As always, all opinions are our own, including Miss G’s.

Plan your trip to Barcelona now:

While in Barcelona we stayed at the recently renovated Hotel Gran Via, a stone’s throw from Placa de Catalunya and the metro.  You can check out rooms and prices by clicking on this link.