Hi Frugalistas!  Continuing my search for the Frenchness of Canada today I’m exploring the magnificent Basilique Notre Dame in Montreal.  But Notre Dame Montreal is definitely French with a twist.  Not a copy of its favourite Paris namesake there is far more to this beautiful building than meets the eye! 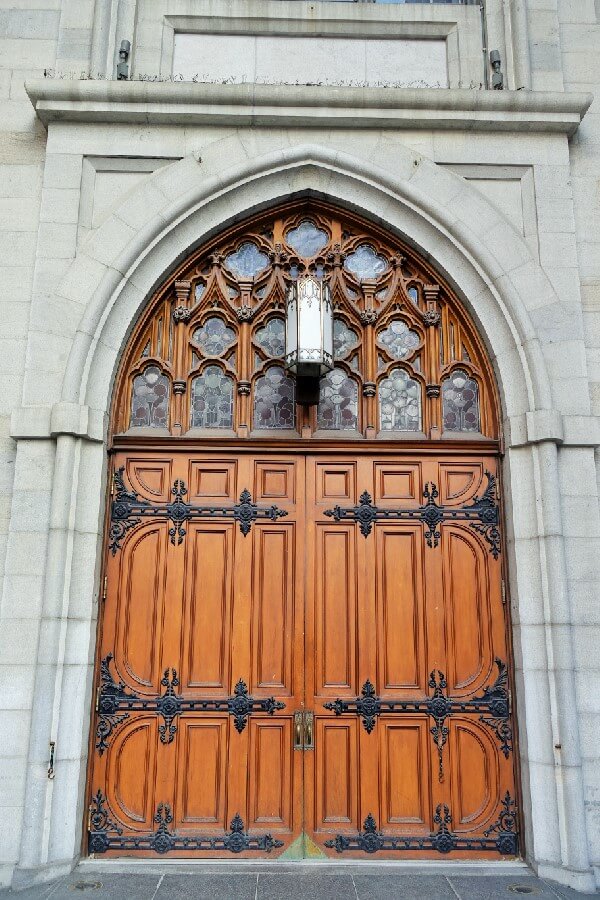 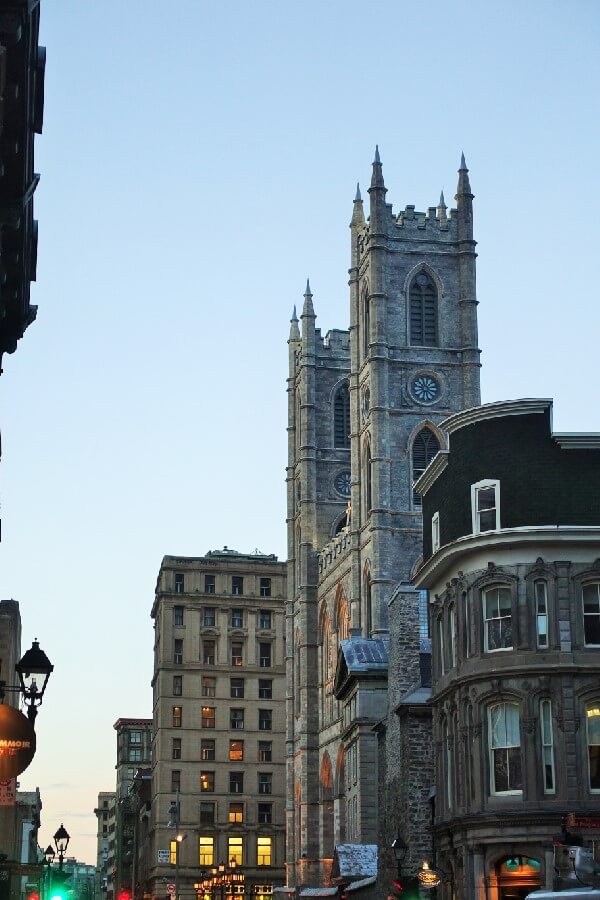 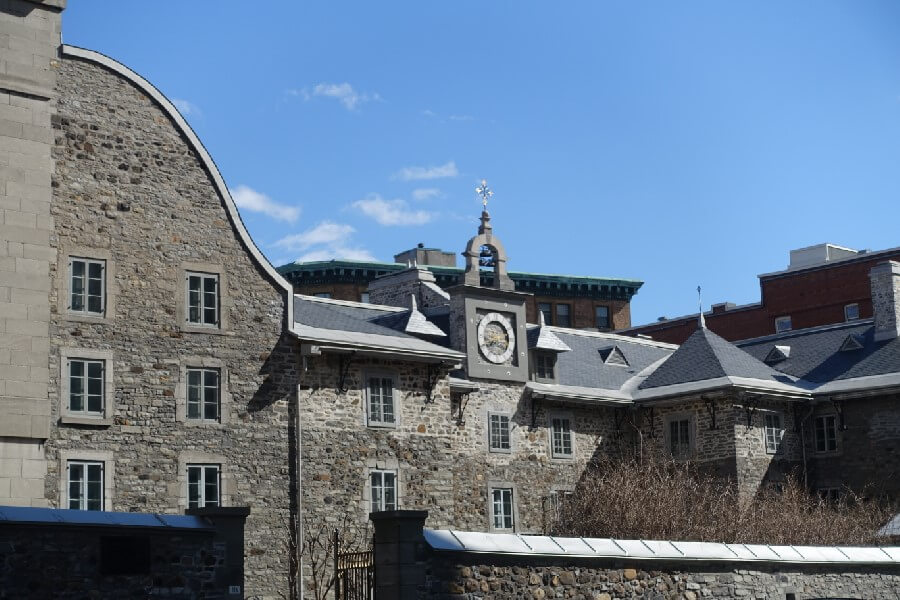 The Sulpician Monastery, the Basilica’s next door neighbour 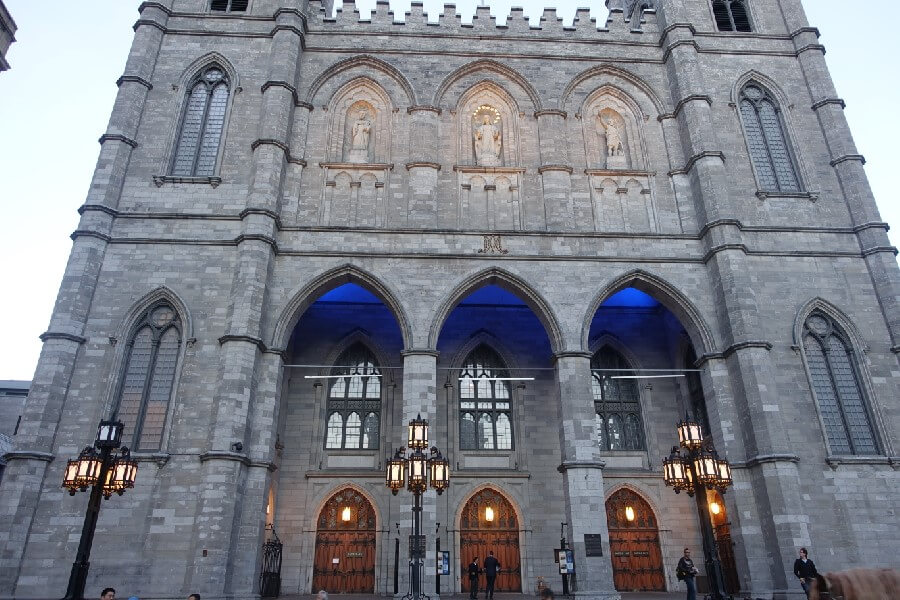 The Basilica front façade in the twilight

Where is Basilique Notre Dame Montreal?

Montreal’s Notre Dame is perfectly located on Place d’Armes Old Montreal.  Its dual spires dominate the skyline in the old town and make a handy marker to find your way as you walk around Old Montreal.

The Basilica is next door to the original Sulpician Monastery that dates back to the seventeenth century.  This building is officially the oldest building in Montreal (although it is heavily restored) and is still home to the Sulpician monks who founded the original church.

There has been a church on this site since the arrival of Sulpician monks in New France in the seventeenth century.  The current church was built in the early nineteenth century.

The monks searched everywhere for the perfect architect to create their new church.  They finally settled on the American, Protestant James O’Donnell who completed the building in 1829, making it the first example of Neo Gothic architecture in Canada.  The interior was recreated in the 1870’s by the Canadian craftsman Victor Bourgeau.  The stunning stained glass windows are indeed French – provided by Limoges in 1930.  A real multinational effort!

The story of the history of Basilique Notre Dame that I loved learning about the most was that of James O’Donnell himself.  O’Donnell was so affected and moved by his work on the Basilica that he converted to Catholicism.  Upon his death he was afforded the honour of burial in the crypt.  It reminded me a little of the story of Antonio Gaudi and the Sagrada Familia Basilica in Barcelona. 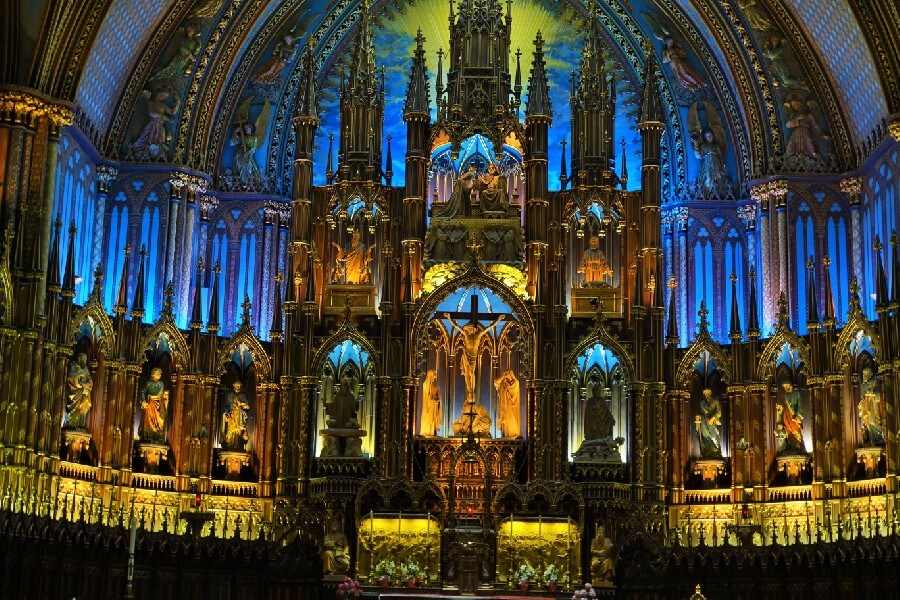 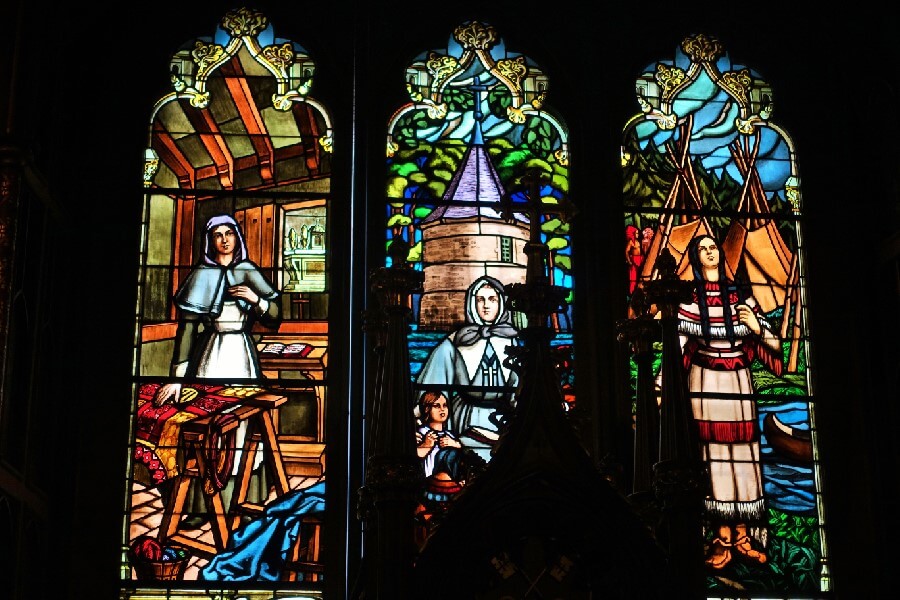 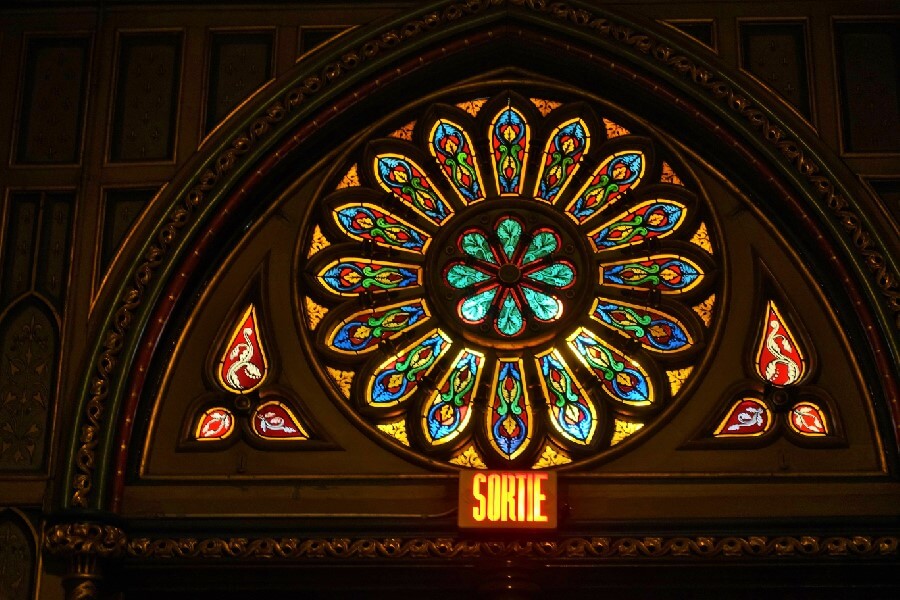 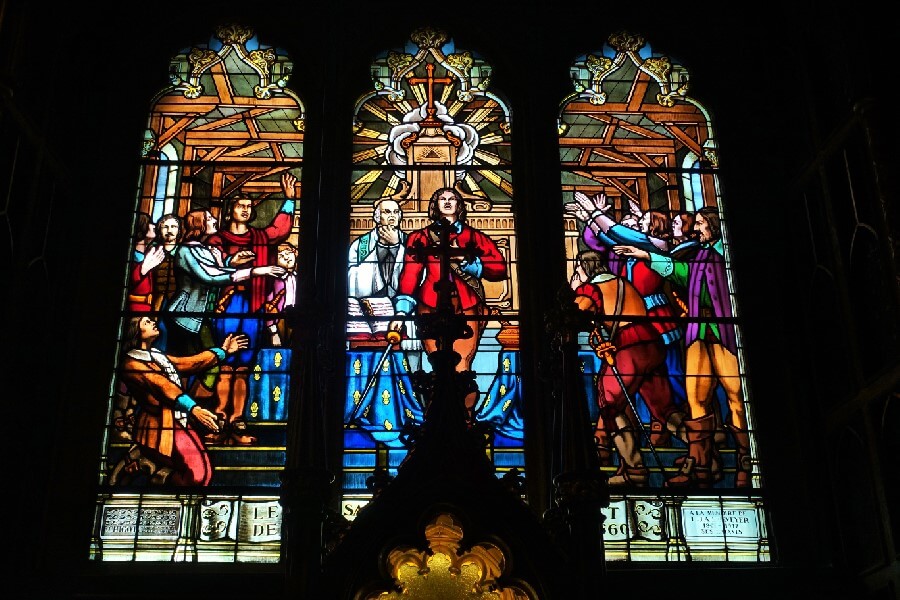 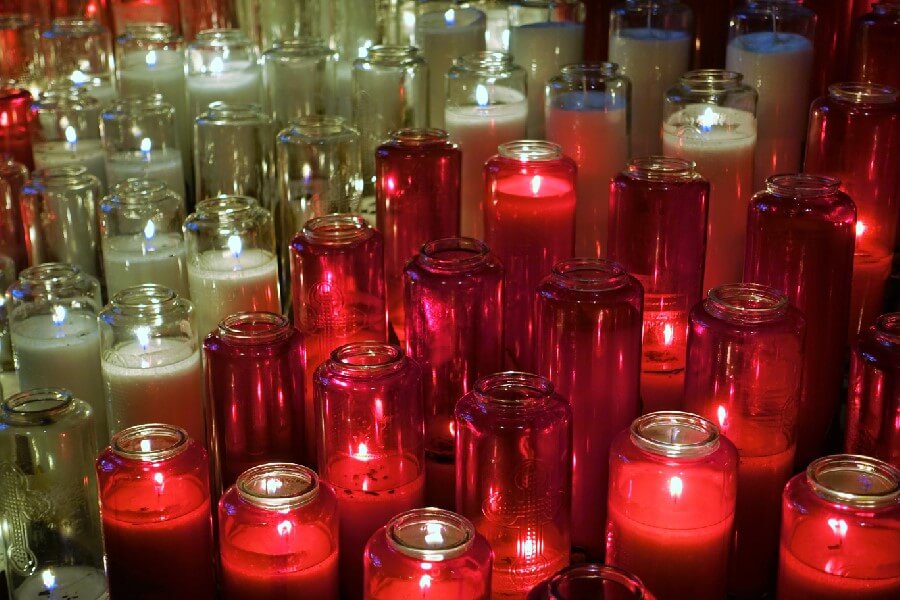 While looking at the basilica from the outside is one thing, really the Basilique Notre Dame is all about the interior.  While it is imposing from the outside, I have to say the exterior architecture really doesn’t do it for me.  Don’t be put off!!  Inside is a whole other story………

Taking in the Basilica takes time.  It is big, and like many grand buildings, the beauty is in the detail.

it looked familiar, strangely familiar in fact.  Then I remembered….. Ste Chapelle, my favourite church in France!

Much bigger, and grander to be sure.  Lacking the jewel-like Gothic stained glass windows.  But the wood and paint work was definitely familiar to me.  Its vaulted ceiling with a glorious heavenly sky also reminded me of a very Gothic experience. 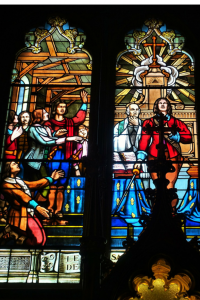 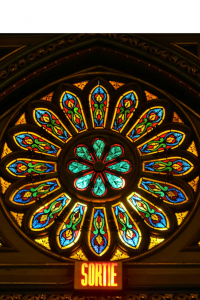 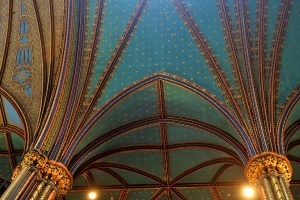 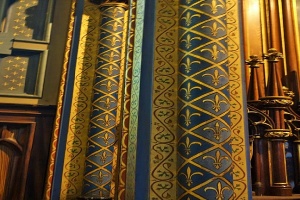 Does this remind you of Ste Chapelle?

What really captivated me with the Basilique Notre Dame though was the stained glass windows.  I’m a bit of a sucker for pretty stained glass and these were absolute winners.  A series of triptych stained glass windows tell the story of early Christian missionaries in New France.  Regardless of your faith I defy you not to be impressed by these windows.

While the Basilique Notre Dame in Montreal is not Notre Dame or Ste Chapelle in Paris, nor is it a pastiche of the two.  It is its Quebec-perfect self, and you should enjoy it for that.  Far less crowded than either of its Paris cousins, it is a place to linger and enjoy the architectural and artistic detail of a Canadian, and Quebec jewel.

A visit to Basilique Notre Dame Montreal costs CAD$5.00.  The Basilica is open between 8.00am and 4.30pm.  Because it is a working, consecrated church it is used frequently – one day I was in Montreal it hosted a funeral for a politician and was closed to the public all day.  I also understand it is a popular choice for weddings in summer, so be flexible and understanding when you visit.  Guided tours are run regularly in English by volunteer guides.  While I didn’t join one, what I over heard sounded very impressive and knowledgeable.

Author’s note:  I was a guest in Montreal of Quebec Tourisme and L’Hotel.  Historic information courtesy of DK Eyewitness Travel Guide to Canada, which was provided to me by Dorling Kindersley.