Hi Frugalistas!  There’s always so much discussion in the France Travel Planning Facebook group (you can join here if you aren’t a member) about day trips to Disneyland Paris.  Is it worth visiting Disneyland Paris, how to daytrip to Disneyland Paris and other Disneyland Paris planning questions.  We’ve done a Disneyland Paris day trip twice now – once when MissG was just six years old and more recently as a sixteen year old.  Because it was the one thing MissG wanted to do in Paris, Disneyland in a day was definitely on our Paris itinerary last trip.  Here is the best way we think to experience a Paris Disneyland day trip. 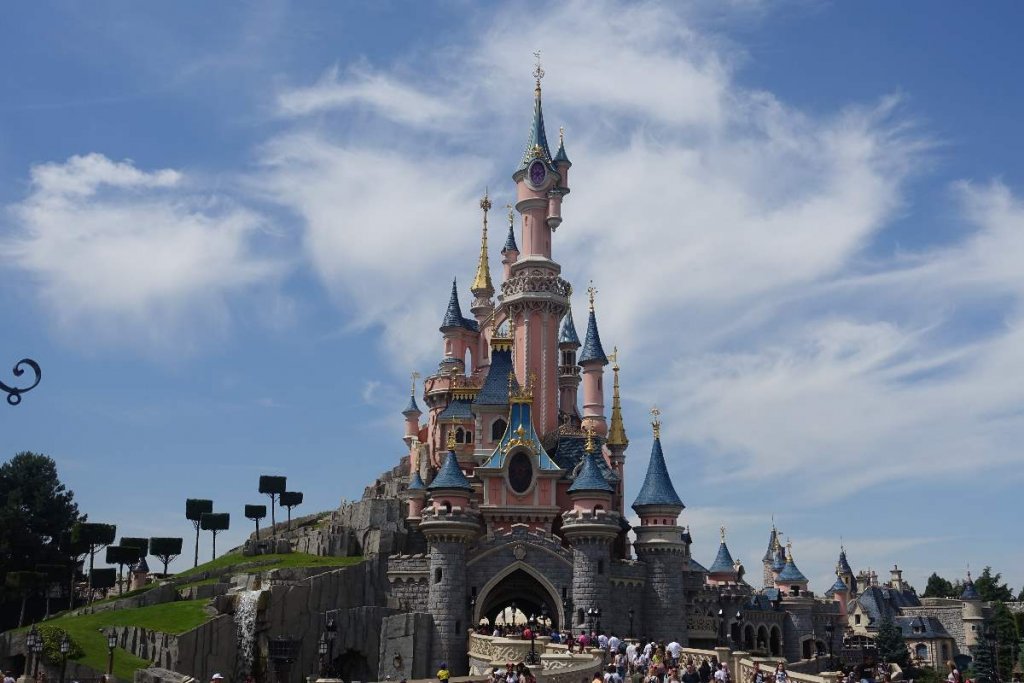 If you are staying in central Paris the best way to travel to Disneyland Paris is to take the RER A train.  Depending on where you board the train the Paris to Disneyland Paris train takes around 45mins and costs around €9 each way.  You can buy your ticket where you board your nearest Metro.  If you aren’t familiar with the RER line don’t worry, there are multiple Mickey Mouse images on the RER signage to help you find your way.

The only tricky part of your journey is to ensure you get on the correct RER train.  If you look carefully at a Paris metro map you will see there are actually two different RER A trains – one that runs to Marne-la-Vallée and a second line that runs to Boissy-St-Léger.  The two lines separate shortly after the Vincennes RER stop.  You must take the Marne-la-Vallée RER train.

So what do you do if you find yourself on the wrong Disneyland Paris train from Paris?  First thing, don’t panic.  Simply get off at the next station and follow the signs to the Marne-la-Vallée train – use the Disney signage if you are not confident.  The other way to check you are on the right train is to confirm you can see the Marne-la-Vallée Chessy station on the route plan.  There are a number of stations with similar names on this line – Marne-la-Vallée Chessy with the Disney signage is the one you want. 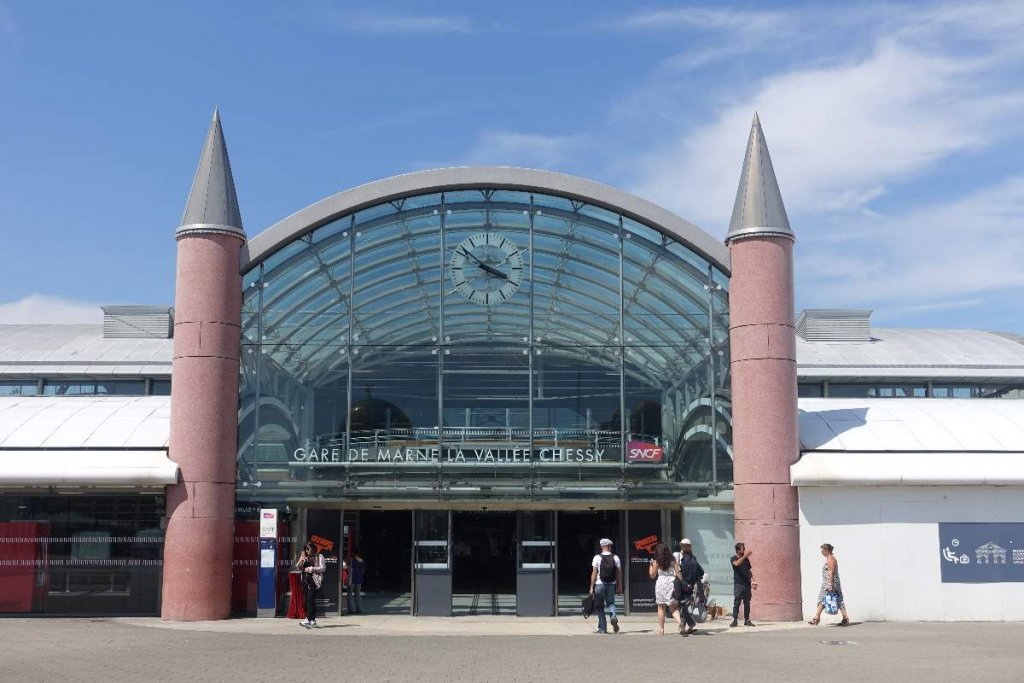 frugal first class travel tip:  If you are visiting Paris in July or August (particularly August) pay attention to rail closures when planning your Paris to Paris Disneyland trip.  The summer is the time that track work takes place and your train journey may be replaced, or be partially replaced by a bus.  Track work closures are widely publicized in most Metro and RER stations.

Disneyland Paris Daytrip:  how we did Disney Paris for a day

We had booked our Disneyland Paris in a day tickets together with the Disneyland Fastpass in advance.  Arriving quite early we were greeted with lengthy queues spilling out into the forecourt.  These were the queues just for security to enter the park area.  There are multiple security points spread across the forecourt – just get in a queue that seems short.  Bags were checked and then we were in. 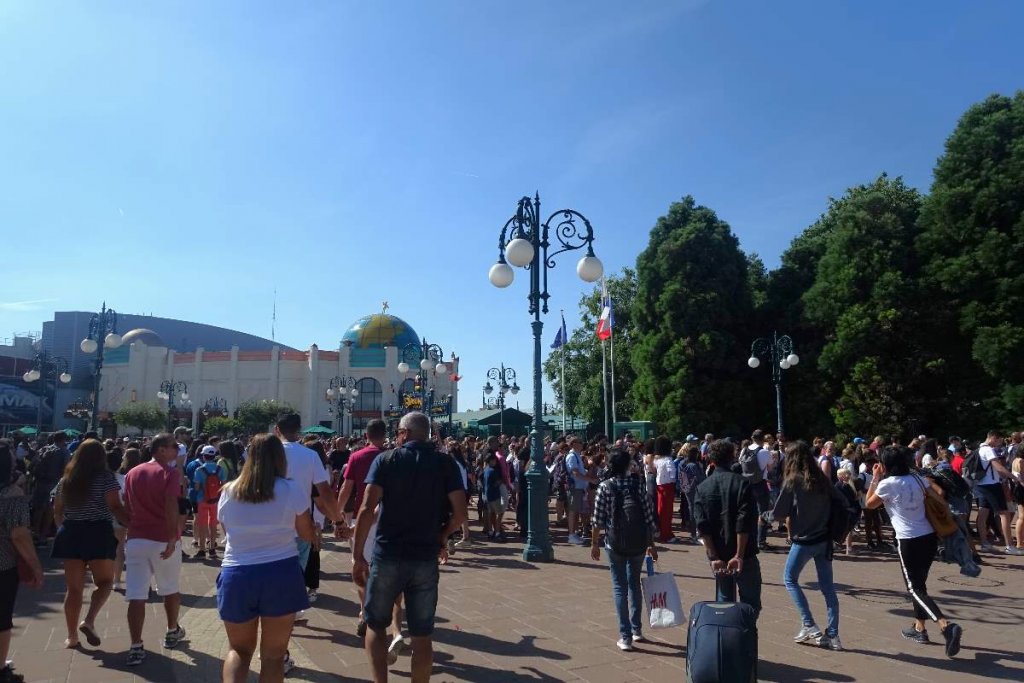 Even early the queues to enter were extensive

Because we had already purchased our Disneyland Paris day passes, we were able to skip that queue and proceed to the check in to convert our Fastpass order into the tickets we needed to enter.  One of the friendly Disneyland Paris staff helped us with the touch screens so we were on our way promptly.

It was a very hot June day when we travelled to Disneyland Paris and queues for most rides were lengthy.  We were very grateful we had purchased the Disneyland Paris Fastpass which significantly reduced the time we spent queuing in the hot sun.  Even with the Fastpass though we still spent up to 20minutes queueing for the Pirates of the Caribbean ride.

If you are travelling with very young ones or want to visit Disneyland Paris in summer you will definitely do better with a Disneyland Paris Premier Access Ticket, which as now replaced the Fastpass. 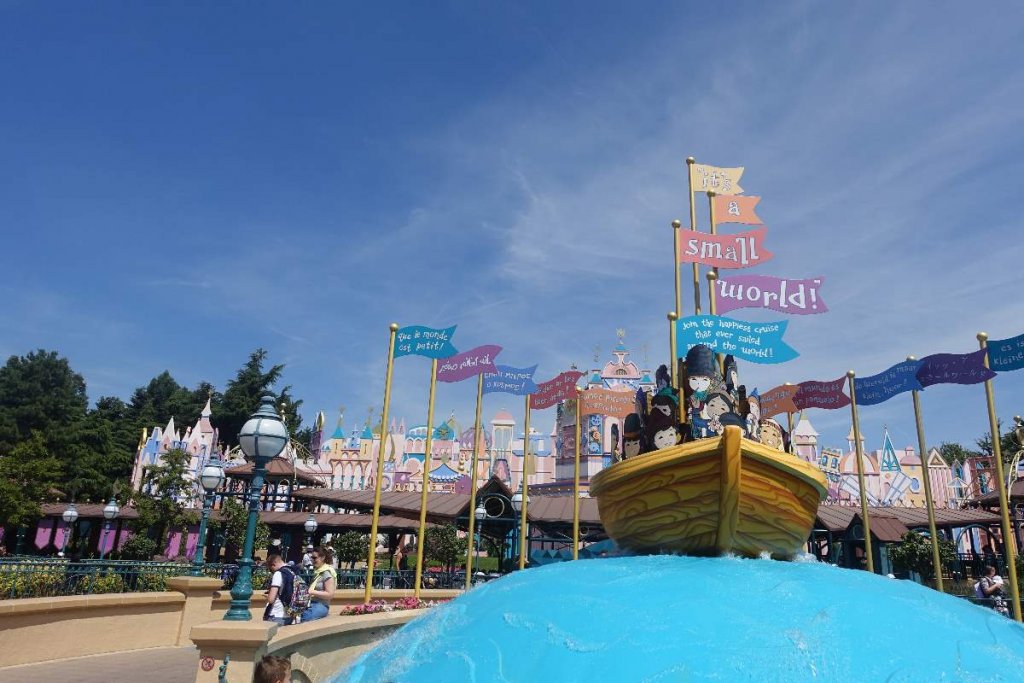 We spent a pleasant day enjoying the rides as a family.  It was definitely fun to revisit the park with the older MissG, who unleashed her inner six year old by recreating a photo at the Pirates of the Caribbean ride that was a favorite photo of ours from our first trip.  We enjoyed both the newer rides and also revisiting some old favorites.

Are you planning a visit to Paris?  My France Travel Planning Facebook group is full of friendly members who can help you plan a perfect trip to Paris.  You can join it here >>

On our previous visit to Disneyland Paris we had found the food very expensive, and our most recent visit was no exception.  Fortunately, this time we were better prepared and had enjoyed a generous breakfast at our hotel.  We made sure we purchased plenty of chilled water to stay well hydrated in the heat, and limited ourselves to the occasional snack from the many casual food stands to keep our energy levels up. 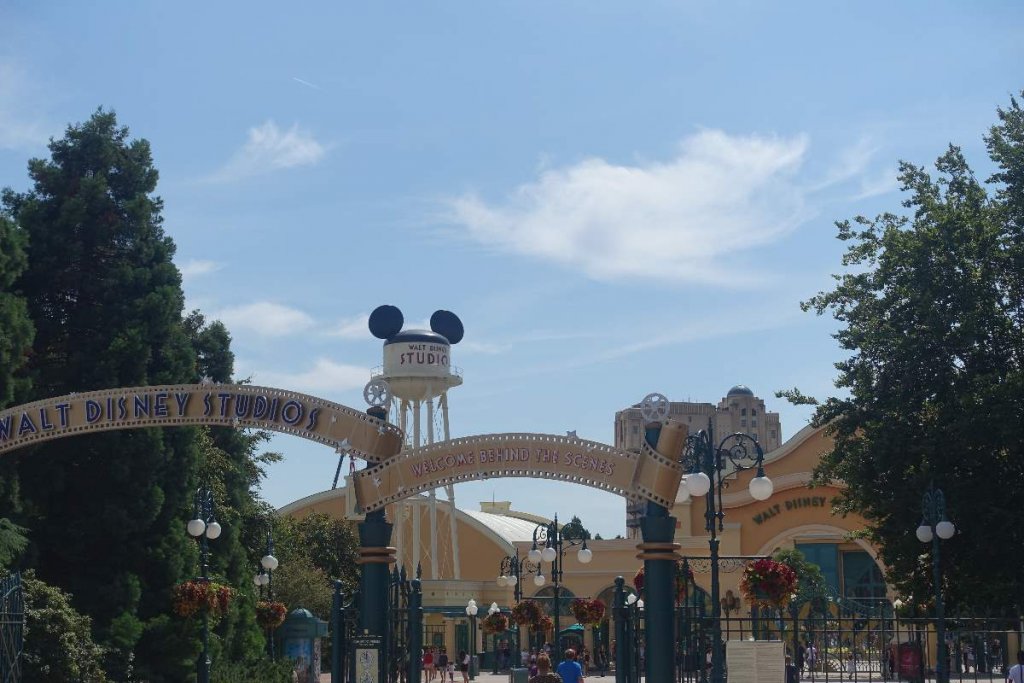 What is the best Disneyland Paris ticket to buy?

Apart from your Premier Access Tickets, there are a number of other ticket choices available for your daytrip from Paris to Disneyland.

First thing to decide is whether you want to visit both parks.  There are separate combo tickets you can purchase.  If you are booking a ticket to both I think it is best to consider booking a two day pass. 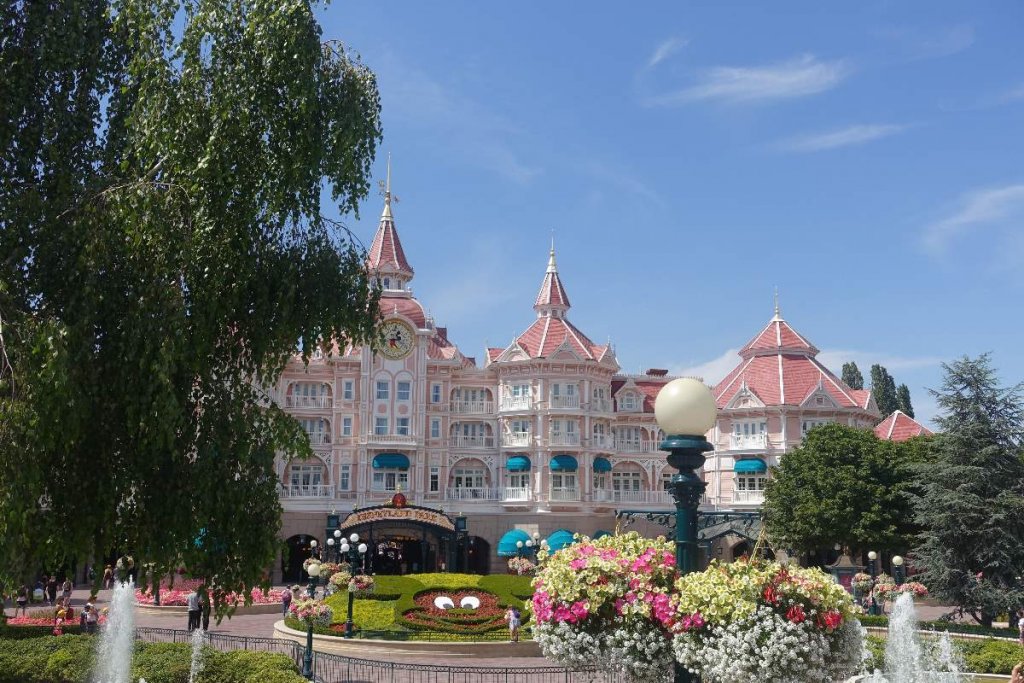 Book Disneyland Paris tickets on Get Your Guide >>

Flexible date tickets are also available but are more expensive:

Most members of the Facebook group who have visited Disney parks in America comment that the Paris Disneyland is somewhat smaller than Disneyland parks in the US.  So if you book a one day ticket and Premier Access Tickets you won’t need a multi day ticket, unless you are a real Disney junkie:

Even though it is very easy to travel to Disneyland via RER from Paris, if you are travelling in a large group or with younger children, you may find a transfer easier.  You can buy tickets that combine park entry and transfers or just transfers.  Just be careful when you book, as some transfers lock you into set times to leave Paris and then leave the park:

Search transfers to Disneyland from Paris on Get Your Guide >>

Search transfers to Disneyland from Paris on Viator >> 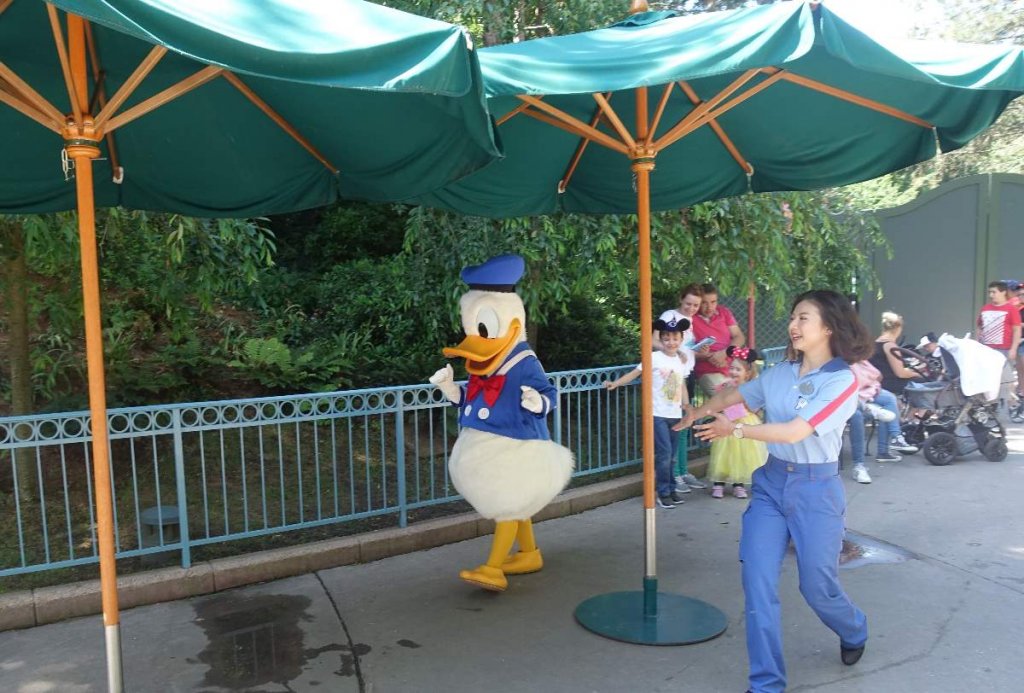 Other ways to do a daytrip to Disneyland Paris

Many members of the France Travel Planning Facebook group ask about staying out at Disneyland for some or all of their trip to Paris.  In general, I don’t believe it’s a good idea because hotels are not cheap and apart from Disneyland there is not much else to see there, apart from the Marne La Vallée shopping outlet.  There’s one exception to this:

If you are travelling with children, consider spending your first or last night at Disneyland, to take advantage of the plentiful Disneyland Paris transfers from both Charles de Gaulle and Orly airports. Depending on the time of your arrival into Paris, you may need to consider a 2 day Disney pass to ensure you have time to enjoy everything.   There are a number of Disneyland Paris transportation options to choose from:

If you are arriving via Orly Airport you also have a number of choices:

Transfers from Orly to Disneyland Paris by private transfer >>

If you are arriving into Paris by train and want a fixed price transfer to Disneyland hotels I recommend Holiday Taxis that offer transfers at a number of different price points:

There are a number of hotels near Disneyland Paris to choose from.  I don’t recommend an apartment at Disneyland Paris as most are not well located to the park, meaning you will need a car.

Author’s note:  we travelled to Disneyland Paris in 2019 prior to the pandemic and paid for our own tickets.  All photos author’s own