Hi Frugalistas!  Princess Diana was only a few years older than me.  Like many young women I “oohed” and “aahed” over her fairytale wedding to Prince Charles.  I enjoyed watching her go from “Shy Di” to the confident, fashion forward woman she became.  Like many of you I’m sure, I remember exactly where I was and what I was doing when I heard she had been so tragically killed, at the far too young age of 36.  So on my recent trip to London I knew I had to visit the exhibition at Kensington Palace Diana:  her Fashion Story and see the White Garden, now renamed and replanted in her honour. 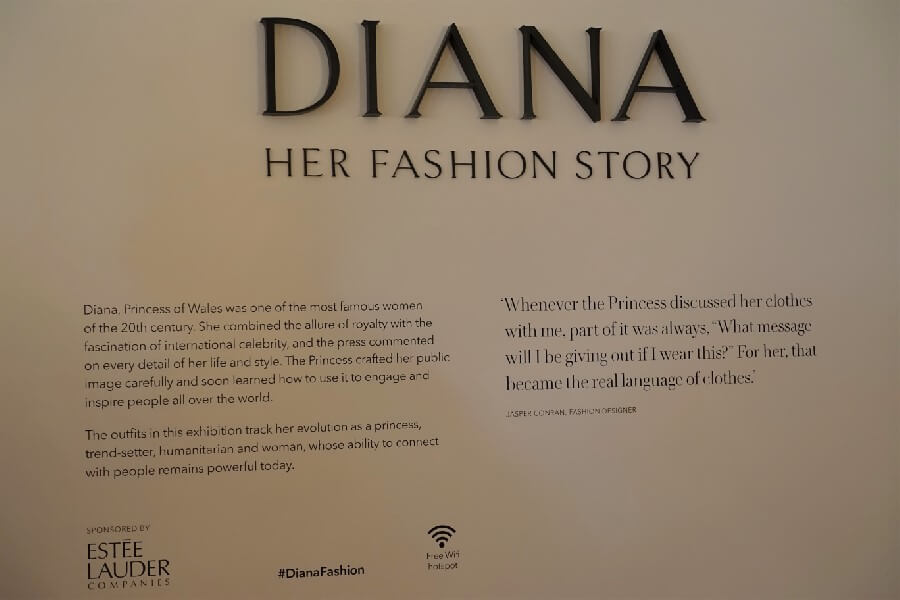 Entrance to the Princess Diana exhibition

The entrance to the Diana exhibition is via the main public entrance to Kensington Palace.  It is best to visit the garden prior to entering the Palace as you will exit via a different aspect of the Palace.  When I visited in April the garden was planted with tulips as well as the many varieties of white flowers that give the garden its traditional name.  The garden will be updated with the seasons to reflect the flowers Diana loved best.  The only disappointing thing is that you can’t enter the actual garden – you have to content yourself with walking around it from outside. 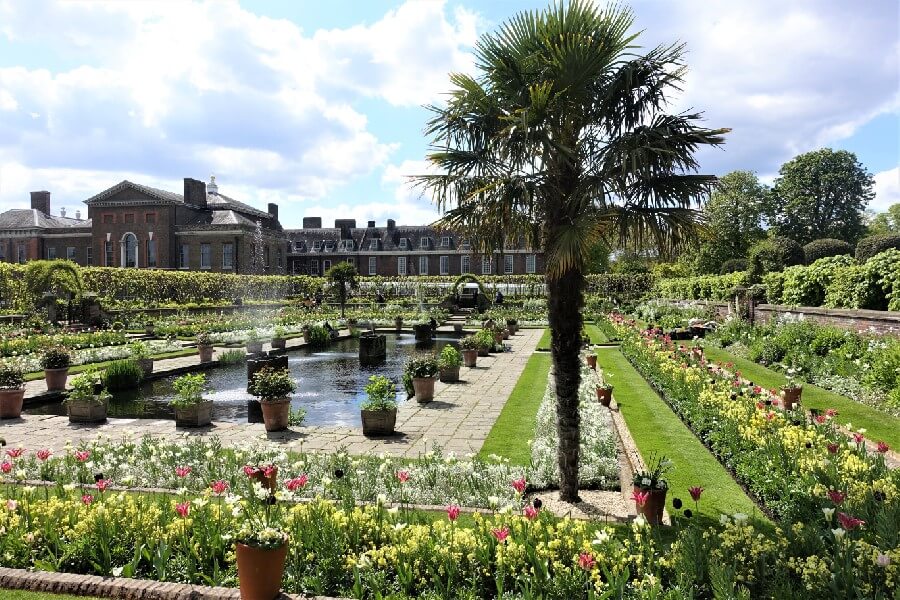 The Diana garden dressed for spring

You can buy tickets for Kensington Palace, which include entry to the Diana exhibition at the door (£19) or online at the Kensington Palace website which is a little cheaper (£15).  The palace website advises that peak visiting time is between 10am and 2pm.  I arrived in the early afternoon on a weekday and did not need to queue to buy a ticket. 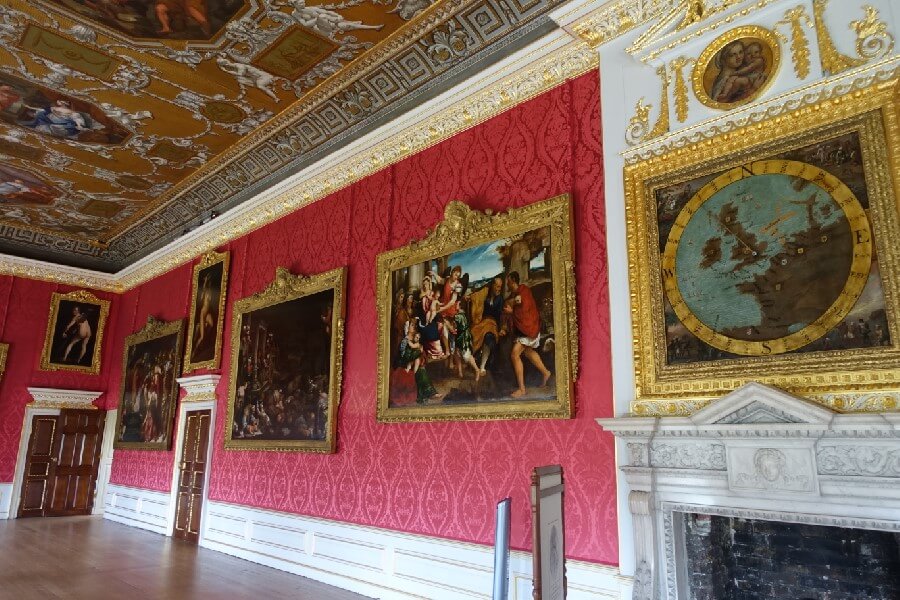 Your tour includes the State Apartments

Your entrance fee includes a tour of the State Apartments at Kensington Palace.  Because of the way the flows in the palace are arranged it is compulsory to walk through the State Apartments to access the Princess Diana fashion exhibition.  I hadn’t been to Kensington Palace for many years and I must admit I did enjoy poking around the apartments.  I also enjoyed the views out over Kensington Gardens from the palace. 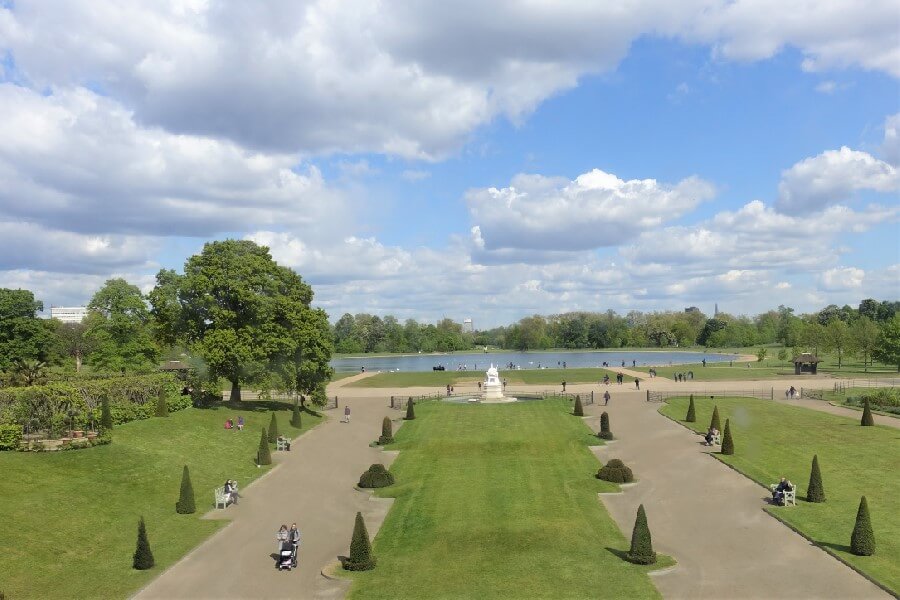 Enjoying the views from the State Apartments

You may need to queue to enter the actual exhibition.  The rooms where the exhibition is set up are quite small, so I found this was worthwhile.  Once inside the actual exhibition you can spend as long as you like and enjoy the clothes without great crowds of people.  At the entrance was a display of just some of Princess Diana’s magazine covers, charting her progress from blushing young bride to stylish fashion icon.  It was fun to reminisce while I waited. 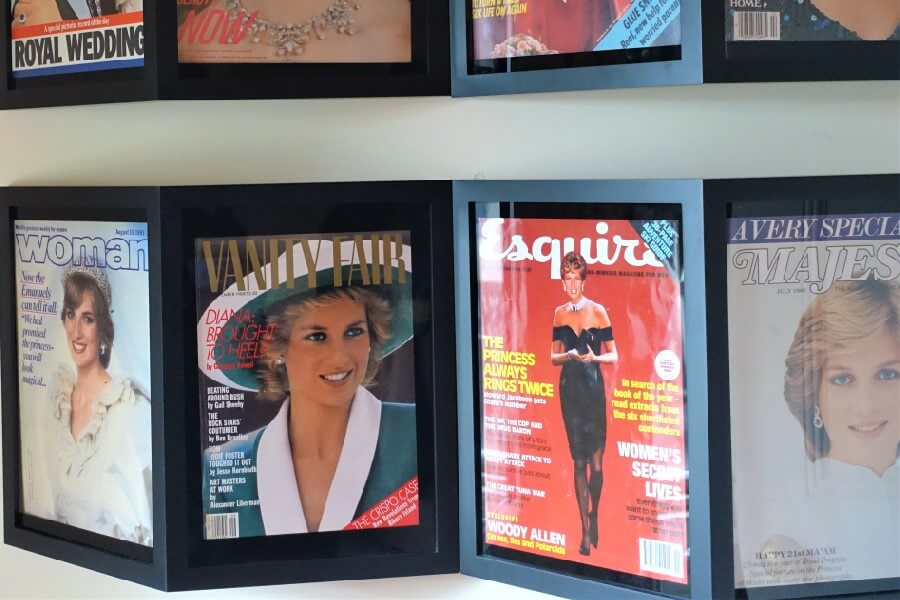 From Shy Di to fashion icon

In small groups of ten or so we were then escorted into the exhibition.  Or so I thought….. Our next stop was a short corridor, but again we were asked to wait.  To while away the waiting time we were treated to a display of drawings made by the many designers who dressed the princess over the years.  They were fun and colourful and I did enjoy them.  My wait to enter the exhibition totalled about 20 minutes. 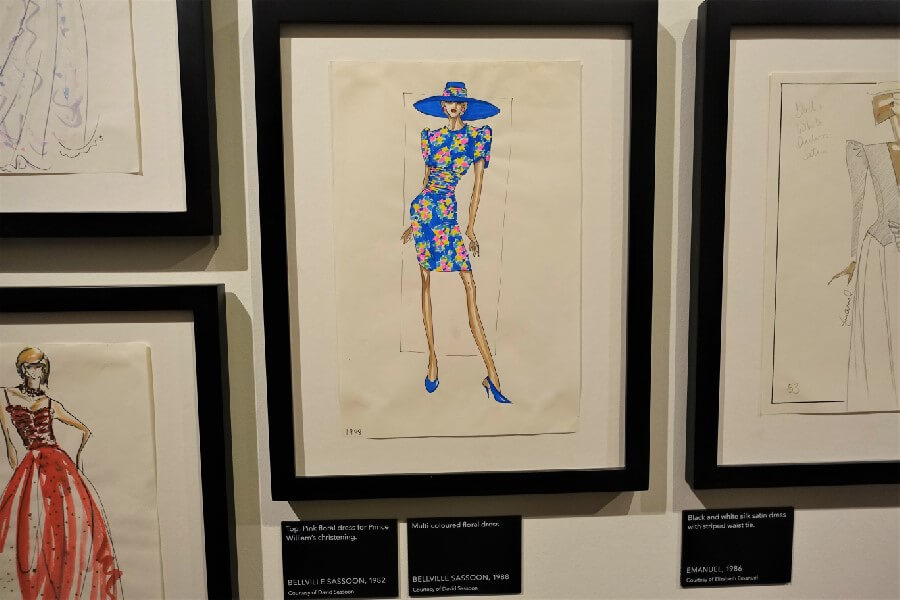 But of course, the stars of the show are Princess Diana’s clothes………….. 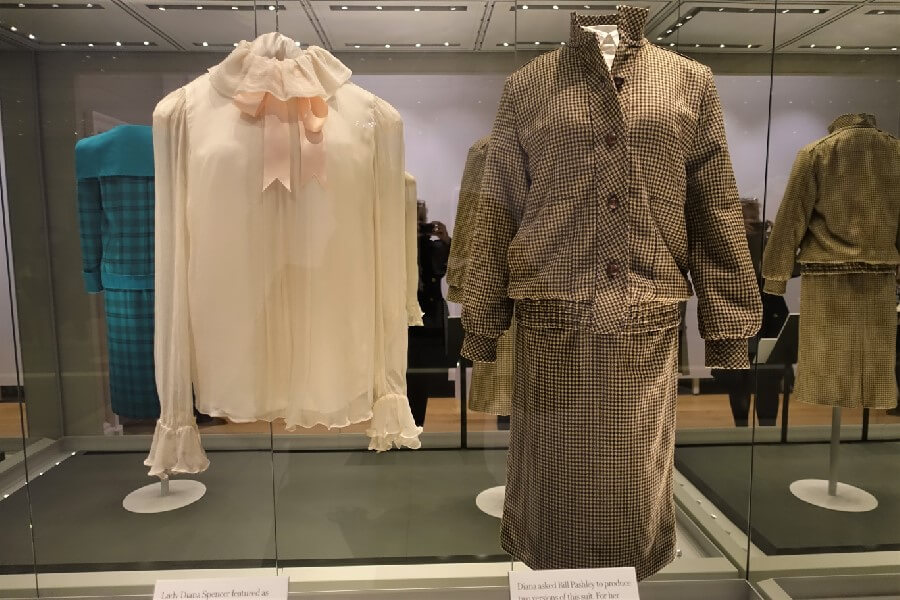 The clothes are arranged in themes and in a sort of chronological order.  The first dress in the display was one I had never seen before – a dress worn by the then Lady Diana Spencer when she was a debutante.  It was horrid.  So horrid that I can’t recall anything like it from that era.  There was also that dowdy check suit she was photographed in during the honeymoon.  But there were also prettier, more feminine early frocks, each accompanied by a photo of her wearing the garment.  I was particularly taken by a pale pink satin with white fur trim that she wore for an official portrait with Prince Charles.  It was pretty, young, but still very regal. 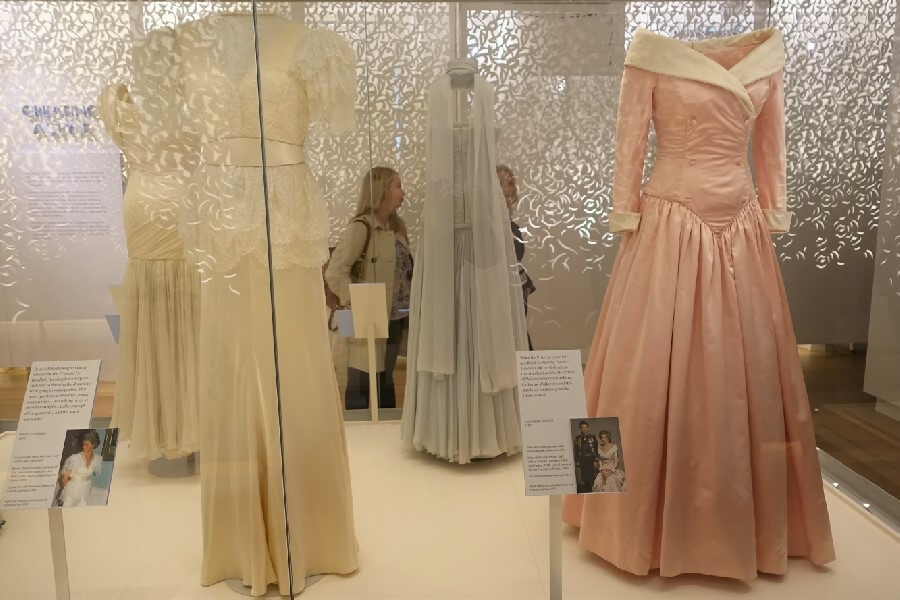 Fit for a princess

As Princess Diana’s life changed, so did her clothes.  They became more stylish, more sexy and more iconic.  What I noticed particularly was how even after 20 years how wearable her choices became as she got older.  Almost as if she knew that sometime in the future the public would still be pouring over them.  The stunning “Elvis” dress, dripping in beading was a standout.  I also loved the restrained glamour and the sheer quality of the eau de nile embellished Versace. 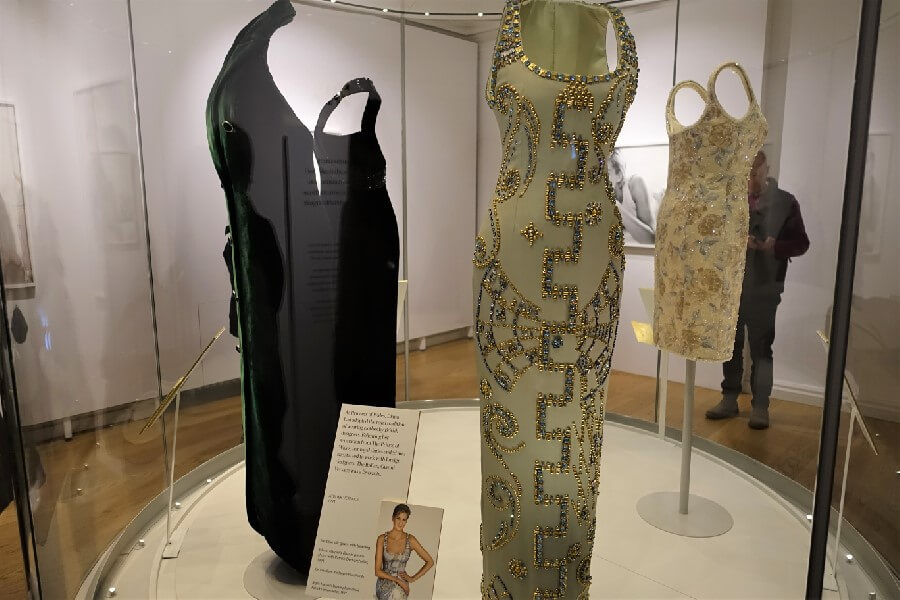 In her later life, Princess Diana was featured on the covers of many fashion magazines.  Because her face was so recognisable (and no doubt sold many, many magazines) the covers tended to be photos of her in close up.  You could see glimpses of the clothes, but Diana was definitely the star of the show rather than what she was wearing.  I was therefore thrilled to see these beautiful portraits, side by side with the clothes she wore in them. 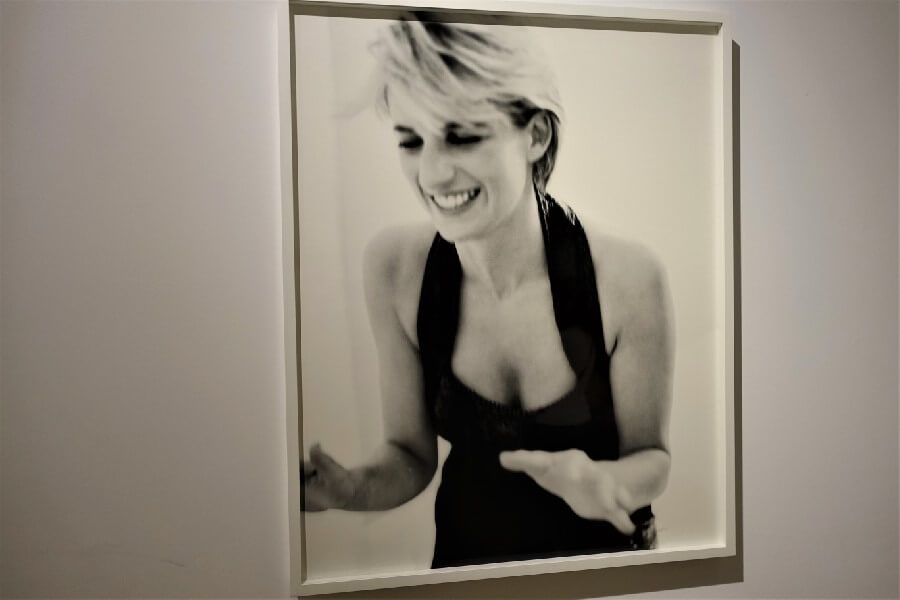 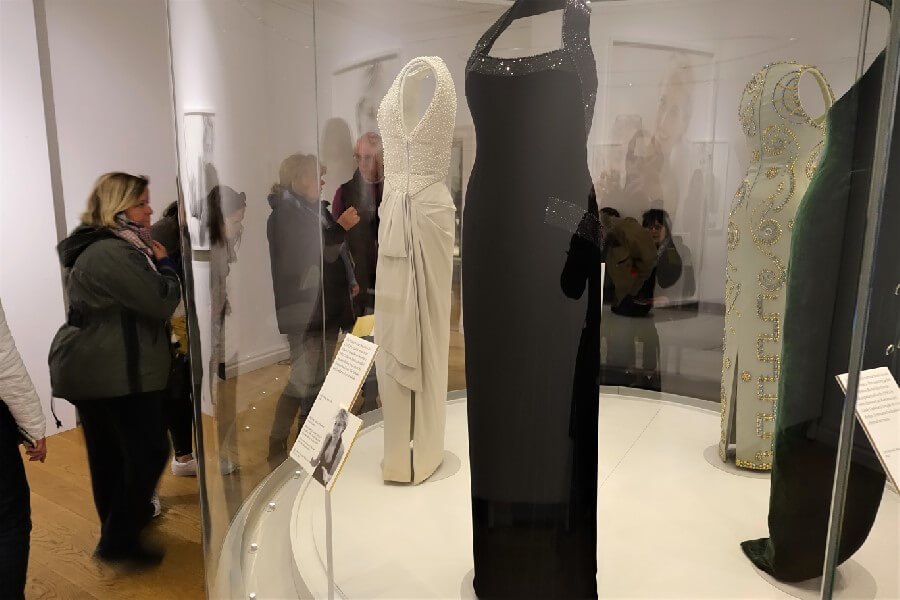 While the exhibition is very much about the clothes, it is more than a “fashion” exhibition.  Diana’s life and work is used to illustrate the use of the clothes, and how and when she wore them.  Quotations from her many designers add greater context to her style and her choices.  I particularly loved the comment from her milliner saying that she never wore hats to hospitals – you couldn’t hug the children in a hat. 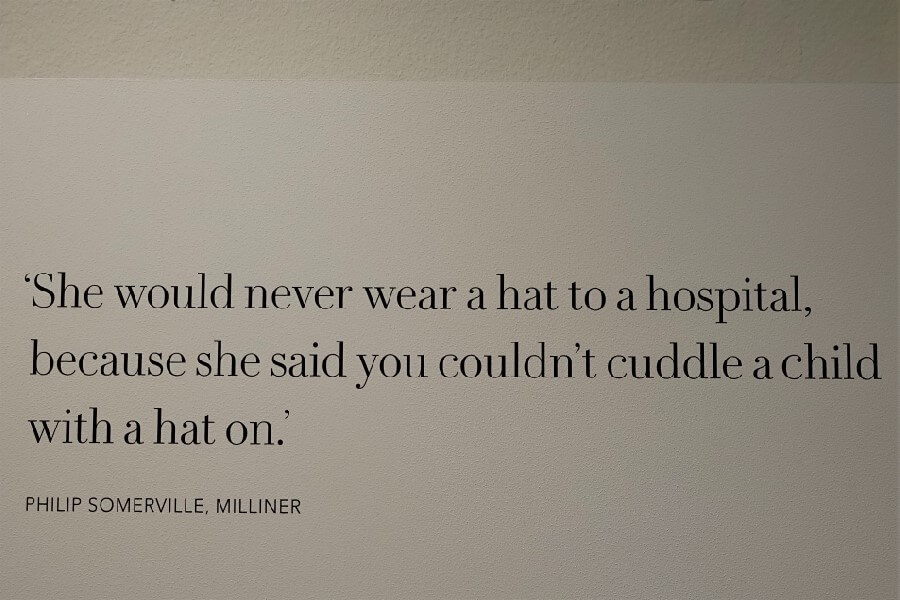 The Diana:  her Fashion Story is an ongoing exhibition at Kensington Palace so regardless of when you are visiting London you can see this wonderful tribute to Princess Diana and her influence on fashion.  The Kensington Palace website indicates that from time to time individual garments may not be on display, but that replacement garments will always be displayed in their place. 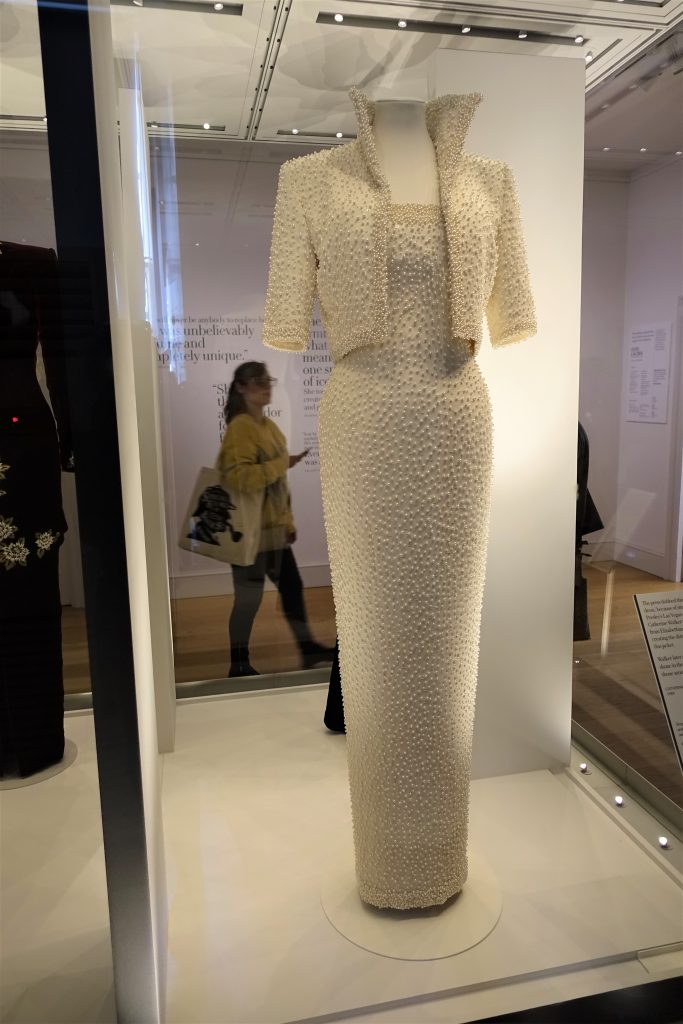 If you remember Princess Diana, love clothes, or just want to better understand one of the most influential women of the late 20th century it is well worth planning a visit to Kensington Palace to enjoy it. 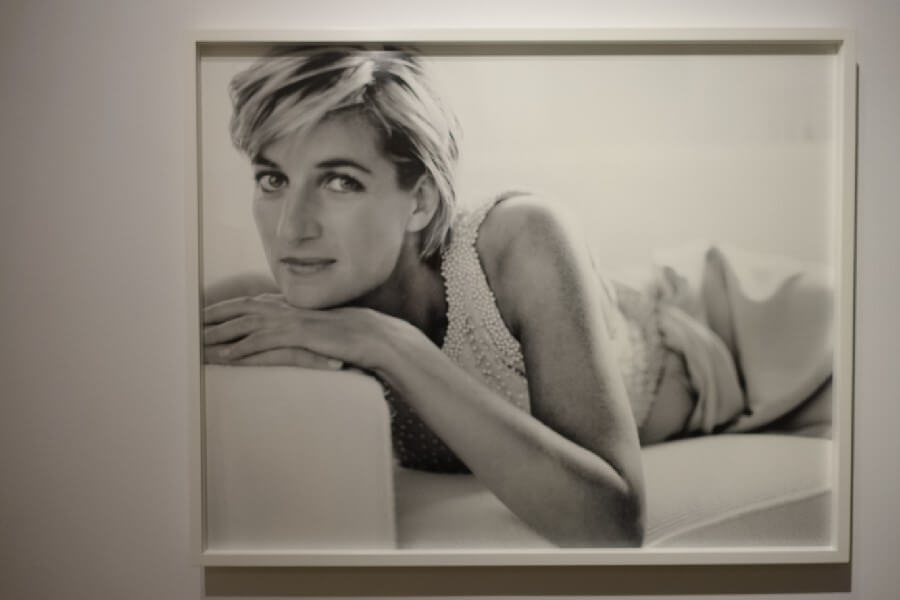 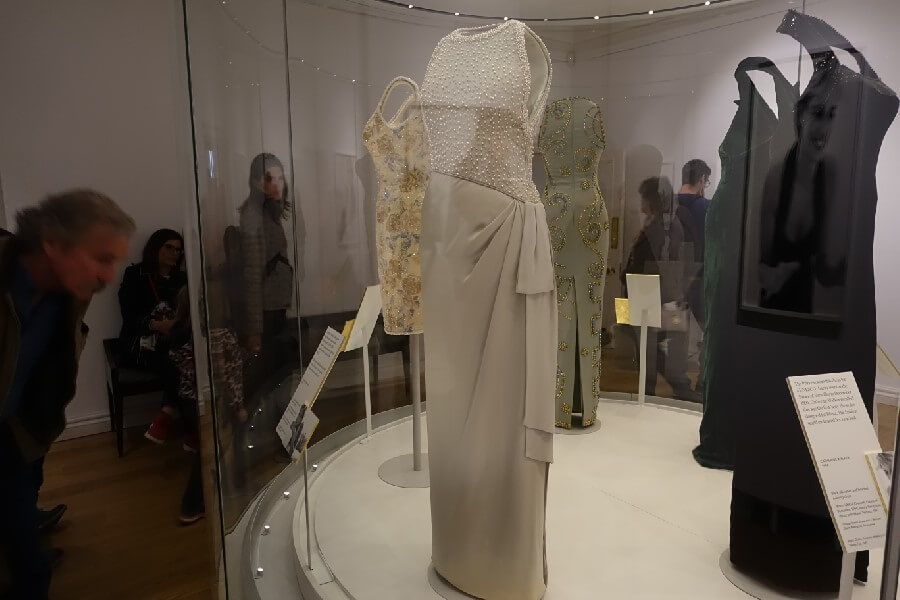 Plan your trip to London now:

The Kensington area of London is home to many hotels, making it even more convenient to visit the Palace. 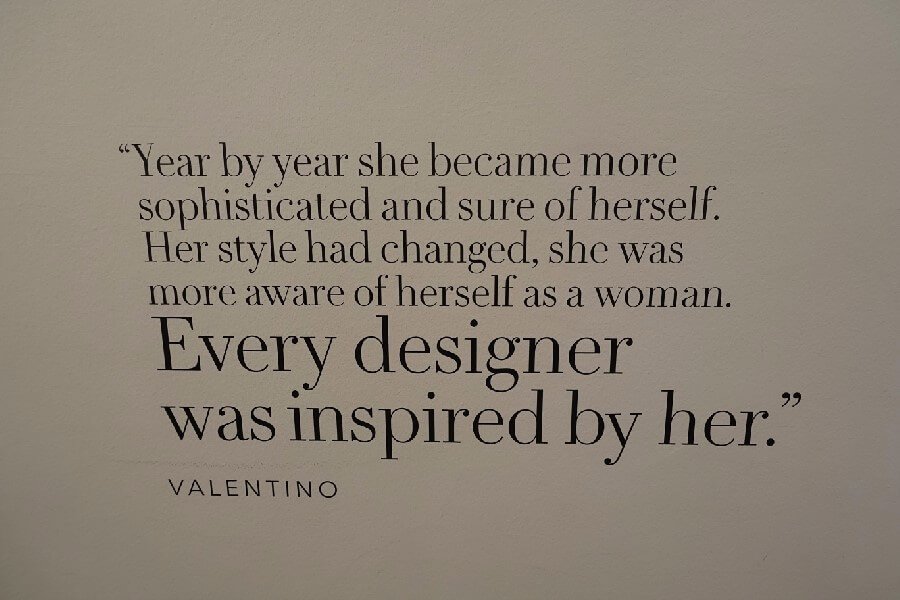 Author’s note:  I paid for my own entry to Kensington Palace.