You are here: Home / France / Do you want to be French? Inspiration from writers

Hi Frugalistas!  Do you want to be French?  If you don’t want to be French, is there a part of you that wishes you had just a teeny bit of that French je ne sais quoi as you do the weekly supermarket shop or school run?  I’ve been traveling to France for many years, and am also an avid reader of any books about France or the French I can lay my hands on.  While I know that no matter how good my French language skills are, whether I sport a Hermes scarf and how often I go there I will never actually be French, there is a little piece of me that wants to feel French.  So, taking some lessons from the literature on the topic of “Frenchness” here is my slightly tongue in cheek guide on how to be French………… (This post is updated as at August 2020, and for those who prefer to purchase from independent book stores includes that option.)

Advice from the Queens of Frenchness  want to be French

There’s no doubt Inès de la Fressange and Mireille Guiliano are the undisputed icons and role models for those of us who may want to be French.  Inès de la Fressange is so French her profile was used to create Marianne – the official symbol of the French republic.  And she also found time to model for Chanel.  And of course Mireille Guiliano taught us all how not to get fat – just like all French woman seem to automatically know.

So it seems to me they are the perfect place to start to look for some lessons on how to be French.

Let’s start with Inès, and the words of wisdom from her book Parisian Chic – A Style Guide.  While it is a whole book of Frenchness, Inès distils it down to one simple thing:

Parisian style is an attitude, a state of mind.

There is an updated version of this book (August 2020) which you may find easier to track down:

But of course, you do need just a little more.  Like her seven key pieces:

A tanktop, a little black dress,

Perfect jeans and a leather jacket.

And of course, to go with those seven key pieces there are shoes and bags…. ballet flats, open toed sandals, a pair of black heels, loafers and a pair of riding boots.  You also need five bags:  a big tote, a clutch, a satchel, a proper lady’s handbag and a straw bag.

What Ines doesn’t tell you is that being impossibly thin, with impossibly long legs probably does help too.

So now we’ve worked out what Ines thinks we should wear to be French, let’s turn our mind to that issue of being impossibly thin.  And of course this is where Queen Mireille comes into her own.  Her book (French Women Don’t Get Fat, and its subsequent volumes have inspired a generation of would be French women.

If you are the only person in the universe who haven’t read her book, Mireille’s advice on how to be French (well at least as thin as a French woman) is quite simple.  And surprisingly it doesn’t involve taking up smoking…..  No, all you need to do is eat only half of what is on your plate, drink only half of what is in your glass, walk, cycle and climb the stairs.  And it seems to help if you can fold and wrap a scarf like an origami master.  And you need to be “bien dans la peau” – feel good in your own skin.

Getting into a French woman’s mind want to be French

Mireille’s concept of feeling good in your own skin and Ines’ belief that you need to have an attitude led me on a search….. a search that ended with How to Be Parisian Wherever you are by Sophie Mas, Audrey Diwan, Caroline de Maigret and Anne Berest.

How to be Parisian wherever you are
Buy on Amazon

But looking beyond the pictures, there are some interesting observations.  There are the things you never, ever wear:  logos, nylon/polyester and vinyl, sweatpants (yes that means you!), blingy jeans, skimpy tops and fake designer handbags.

What’s really interesting is the section on how to be “au naturel“.  Being “au naturel” is of course, terribly hard work.  But help is at hand – apparently you just have to give the impression that you don’t take care of yourself.  Interestingly, this means you just go to bed with damp hair so you wake up with a more “interesting” shape to your hairstyle (yeah right).  It also means you don’t wear foundation or dye your hair, unless it is to your natural colour……

Our girls also provide us with a helpful list of French faux pas – the 15 things to avoid doing at all cost if you want to be French.  These crimes against Frenchness range from over plucking your eyebrows, to asking people what they do for a living, to having your wedding photo out in public in your sitting room, or daring to be friends with your children.  Horrendous, no? try to be French

There is also a fairly eclectic list of things you can do to be French, that don’t seem to involve wearing a navy sweater or a scarf or being impossibly thin.  In fact, they are things that seem to be reasonably straight forward.  Whether they are going to make you French is of course another thing entirely…. you don’t eat breakfast, you always put perfume on before you go out, buy flowers for your house, and always buy nice lingerie (more about the nice lingerie later).  Then you need to go a market with a wicker basket, and perhaps the most terribly French thing of all?  At the end of your shower, you spray your breasts with cold water – oh, la, la! want to be French need to be French

Makes me wonder if being French is actually more about teasing those of us trying to be French?

Advice from Anglophone writers need to be French

It’s easy for French women to tell us how easy it is to be French.  After all, for a French woman, they just are French, without even trying.  So I think it’s important to consult some Anglophone writers in the hope of some more realistic advice.

The English writer Helena Frith-Powell considers the question of “being French” in her book Two Lipsticks and a Lover (titled All you need to be Impossibly French in North America).  Her take on Frenchness goes beyond the navy sweater and the attitude.  And it also goes beyond having two lipsticks and a lover – her starting premise.

All you need to be impossibly French
Buy on Amazon

What Frith-Powell discovers is a complex web of social norms and values so different to our version of normal.  And the need for good quality lingerie – with the bra and panties matching.  Always.  Of course, having a wonderful haircut helps too.  And the rules around pregnancy and mothering are the complete antithesis of everything we Anglophones consider to be self-evident.  Despite all the work that seems to go into the external appearance, intellect and being well read and informed is a must do.

In her best seller Almost French, the Australian Sarah Turnbull wears an awful jumper, marries a French lawyer and moves to Paris (as you do).  And the quest is on to “be” French.  Rather naively Sarah thinks that moving to central Paris from the suburbs is going to do it.  But it doesn’t.  Then she thinks it’s successfully wrangling the tradesman who come to renovate her new central Paris flat.  But strangely that doesn’t work either.

Despite her good French, she can’t penetrate French society to work as a journalist. There she is in Paris, speaking French, and she can’t get interviews with French subjects.  Her pitches go unanswered.  Finally she accepts her husband’s advice and let’s him draft her pitch – in the most flowery, embellished business French.  And suddenly she’s in…….she’s (almost) French.

Reflecting on my readings, I’ve personally come to the view that I will never be French.  Regardless of how good my French is, regardless of how thin I am and how many stairs I climb, or navy sweaters I wear.

The reality is that identity and culture are far more complex than how you wear your hair, or whether you wear sweatpants to the supermarket.

But here’s the thing:  you can take the parts of French culture, French style and French attitude you like, and create your own individual look, style and attitude.  You can get the trench and the ballet flats, you can shop at the market with the wicker basket.  You can even have two lipsticks and a lover, if that’s what you want.  But you don’t have to.  want to be French

And won’t you just be the most perfectly individual version of yourself?  need to be French

Apparently, to be truly French there are certain books you must have read (well, that’s what the How to be Parisian girls say anyway), so I thought you might enjoy seeing their choice of “must read” French literature:

The Stranger by Albert Camus

The Elementary Particles by Michel Houellebecq

Foam of the Daze by Boris Vian

The Flowers of Evil by Charles Baudelaire

Journey to the End of the Night by Louis-Ferdinand Celine

Having lots of books, is also meant to be very, very French according to these girls. 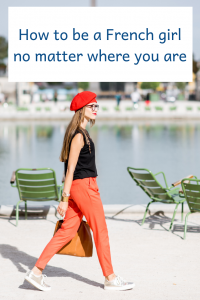