You are here: Home / France / Finding the real Paris

Hi Frugalistas! “Ah, Madame, you found the real Paris.”  Music to my ears from the waiter at dinner just a month ago, asking me how I had spent my Sunday in Paris.  What had I done?  I’d been for a walk that I had wanted to do for some time, exploring some of the parts of Paris I’d never been to before.  With events of the past week or so making Paris seem like such a different place, I’m focussing on the normal.  The day to day. The Paris locals know.  The Paris you can easily, and safely, find yourself.  Finding the real Paris is not hard, and is almost free.  You just need to know where to look……. Starting your walk for finding the real Paris

The Gambetta Metro stop is situated on a square with multiple streets heading off it.  You are looking for rue Sorbier to the north of the square.  When I visited, the street sign was covered in stickers and graffiti (so yes, you are looking for that street!) Rue Sorbier is a somewhat inauspicious street, but as you wander along it you will notice a number of schools with particular signage.  Written in French, they are memorials to the Jewish children of the school, taken away during the Second World War.  Very touching.

Heading deeper into the real Paris

Keeping along rue Sorbier until you reach the end of it at rue de Menilmontant.  You are now in Belleville, an “up and coming” area of north east Paris.

As you cross rue de Menilmontant look left.  What do you see?  There in the distance?  Yes, it’s the Centre Pompidou.

Crossing rue de Menilmontant continue along rue Henri Chevreau, veering to the left at the fork in the street.  At the end of the street is rue des Couronnes where you need to turn right. Now, you need to keep your wits about you.  You are looking for a left turn into Passage Plantin.  Yes, it is that laneway up the stairs (actually quite well signposted when you find it).  Passage Pantin is pretty, with a number of freestanding homes, that apparently were quite common in Belleville before the developers moved in.

At the end of Passage Plantin turn left into rue de Transvaal (which turns into rue Piat).  There you will find……..

The most magnificent view of Paris

The lookout over Parc de Belleville has the most memorable view of Paris.  Eiffel Tower? Of course.  The dome of the Invalides?  Bien sur!  Notre Dame?  You got it! Even on a grey day, probably the best view of Paris

Head down into the park for a more detailed tour, or head down rue Piat until you reach rue de Belleville and onto rue de Rebeval.  A few quick turns from rue de Rebeval:  right onto rue Pradier, and then left onto avenue Simon-Bolivar.

Finding the real Paris in the Parc des Buttes-Chaumont

Just along avenue Simon-Bolivar is the corner of the Parc des Buttes-Chaumont.  Forget the Tuileries.  Forget the Luxembourg.  On Sunday at least, it’s the Parc des Buttes-Chaumont that’s the park to be at in Paris.  Hundreds, literally hundreds of runners.  Dogs, literally, tens of dogs.  Children kicking a ball.  Lovers stealing a quiet cuddle.  Young artists drawing – not painters painting in the touristy areas of Montmartre.  But normal, young men sketching.  Oblivious to everyone else. 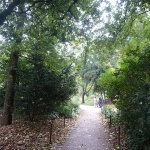 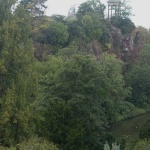 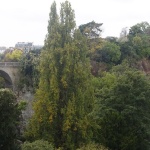 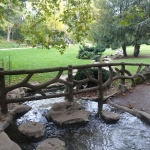 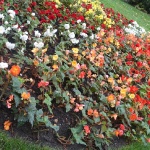 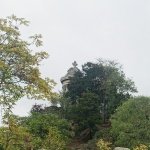 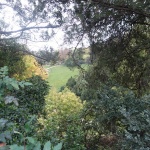 Wander around the park without a map.  It’s fenced so you can’t get lost.  Follow the locals through the current renovations, completely ignoring the “do not enter” signs (it’s Sunday after all!)

Did you find the water?  And the little bridge over to the amazing folly?  And the old mine shaft remains?  Yes, the park was once a mine, and signs of the diggings remain.

Maybe check out rue Bolzaris.  If it’s Sunday there may be a vide grenier (garage sale) out in the street.

The important details for finding the real Paris

Your walk is quite safe.  I did it on a Sunday morning.  My French teacher did tell me though, that, like many areas in any large cities, this walk is best enjoyed in daylight hours.

You do need to go up and down stairs, and the walk will take you a couple of hours.  Comfortable shoes and a reasonable level of fitness would definitely make the journey more enjoyable.  For the less fit, there are multiple metro stops along the way.  Buttes-Chaumont itself is quite hilly. There are multiple, simple cafes along the route.  I heard and saw no English at all on this walk, so a translation app, upcoming post or e-book is definitely helpful if you don’t speak French.  There are plenty of cafes along avenue Simon-Bolivar – both modern and more traditional, as well as a bakery that was doing enormous business.  There is also a café and a more formal looking restaurant in the park itself.

The closest Metro to get back to your hotel is on rue Bolzaris.

And you definitely need  a good map that includes all 20 arrondisements of Paris (because you will be spending most of your journey in the 19th and 20th).

If you want find a great hotel in Paris, upcoming post