You are here: Home / Canada / How French is Quebec?

Hi Frugalistas!  Being the true Francophile I am I was desperately keen to visit Quebec on my recent trip to Canada.  The question I was interested in exploring, and answering, was “how French is Quebec?”  I don’t consider myself an expert at all on the topic of Quebec or Quebecois culture.  But I did spend time with Quebecois.  I spoke French with Quebecois.  I ate Quebecois food and drink, and enjoyed Quebecois architecture.  I experienced the Quebecois “joie de vivre”.  But how French is Quebec?  Well, I think that’s complicated…… My First Assumption About How French Quebec Was

Before I went to Montreal and Quebec City I knew that they were in Quebec, which is of course, the “French” part of Canada.  I knew that Quebec French was different to French as it is spoken in France.  I knew there had been at different points of history strong separatist movements for Quebec to become independent from the “English” part of Canada.  But for some reason I assumed that was because the  Quebecois identified as being “French.” French style furniture, but furniture alone does not make a place French…..

In planning my trip, learned there were different local Quebecois foods.  I worked out that there were a lot “outdoors” adventure activities.  I discovered that the Montreal Canadiens hockey team totally ruled.   Hhmmm….. none of this seemed very French. Like most of Canada, in Quebec it is all about hockey, and there is only one team….

But even so, I still had this mental image that somehow Quebec was still French.  Poutine eating, hockey loving and outdoorsy French people with “funny” French accents.

Reflections on the question: “how French is Quebec?”

Then I visited Quebec.  I realised immediately upon arriving in Montreal how naïve my question, and indeed my assumption and hypothesis was.

The more I explored Montreal, the more I realised that Montreal was definitely its own city, with its own identity.  It didn’t look French.  It was very multicultural.  It was historic, it was modern, it was traditional, it was funky. Montreal is big on public art. I loved the mix of modern and traditional

The hockey playoffs were in full swing and the whole city was crazy for their beloved “Habs”, the Canadiens.  Whether I watched French language or English language television, it was definitely all about hockey.

There were, of course, things that did remind me of France in Montreal.  Both the Marches Jean Talon and Atwater would do any French town proud.  But there was maple syrup and maple syrup products everywhere in those markets.  The Canadiens flag hung proudly at Jean Talon.  Yes, it was sort of French.  But it wasn’t really…………

Walking around the streets I saw young women who definitely had that Parisian chic I am always so envious of.  But when they opened their mouths they spoke flawless English with a Canadian English accent.  They did not sound French at all. Parisian chic in Montreal, but a Canadiens supporter lurks to the left! Then I went to Quebec City.  Yes, it was decidedly more “French”.  It looked more French in some ways, more people spoke French, and the French they spoke sounded “more French” to my ear.

But talking to people, exploring the city and understanding its history, I soon realised that, again, “France” had eluded me.  Quebec City had beautiful historic architecture, it had a charming old town and a gorgeous outlook on the St Laurence River.  I found shops selling those lovely French kitchenwares.  I found a shop selling Quimper china.  There were clothes shops to die for (I’m definitely going shopping next time I’m there!).

But never, ever, did I feel like I was in France.  I was somewhere else.  I was in Quebec.  And it was fantastic.

Should you look for France in Quebec? These sweets shops are all over France….and in Montreal

You can dine in French restaurants and eat duck confit.  You can buy French clothes and speak French.

But to me, that’s not really the point of going to Quebec.

Reflecting on my time in Quebec, I think the question to ask is not “how French is Quebec?”, but “should you look for France in Quebec?”  And I have to say, no I don’t think you should. Yes, you can eat duck confit, and drink Perrier, but my question for you is should you?

Just as the English speaking parts of Canada are not English, Quebec is not France.  As an Australian, I’m conscious that despite my Anglo-Celtic cultural background, I’m not British.  Yes, I speak English, but I speak different English, with a different accent (that some Quebecois couldn’t understand).  And I like different things.  I’m no more “at home” in London as I am in New York, or Vancouver.

To me, it’s therefore perhaps a bit ignorant, or maybe even arrogant, to assume that a people, a society and a culture is defined by something as simplistic as the language that is spoken.  Culture and society is far more complex than that. The philosophy of frugal first class travel is to seek out the authenticity of a destination.  And I think I found that in Quebec.  I found that it wasn’t “French”, and nor was it “Canadian” as I had experienced it in Vancouver and Ottawa.  It was unique.  It was “Quebec.” Repeat after me “Quebec is not France”

And when you go to Quebec, I genuinely think that is what you should go in search of.  Don’t be disappointed by the things that aren’t French.  Don’t obsess about the things that are.  Immerse yourself, and enjoy the sheer “Quebecness” of Quebec.  That is the truly authentic Quebec, and that is precisely why you should travel.  Not to find a pale imitation, or a version of some place else.  But a unique, vibrant and singular destination and experience that is the perfect version of itself. 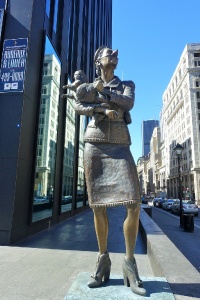 Quebec is not French… 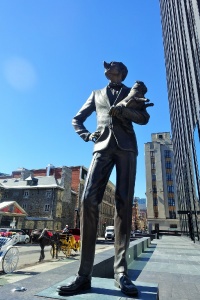 And nor is it English

Author’s note:  While in Quebec I was a guest of Quebec Tourisme, and their many wonderful partners.  I would like to thank each and every person I met in Montreal and Quebec City for showing me the uniqueness and helping me understand so much about their cities.